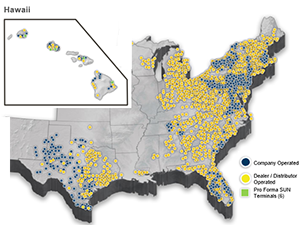 In a dropdown of assets administered Monday, Sunoco LP (SUN) has agreed to acquire from ETP Retail Holdings, an affiliate of ETP, a 31.58% equity interest in Sunoco LLC, which distributes approximately 5.3 billion gallons per year of motor fuel to customers in the East, Midwest and Southeast regions of the United States. The transaction is valued at approximately $816 million.

"This transaction gives us new exposure to customers in 26 states from Maine to Florida to Louisiana, where the Sunoco fuel brand is very strong, complementing our current base of wholesale customers in the Southwest and Hawaii," said Robert W. Owens, president and chief executive officer of Sunoco LP. "We will also enhance our sales channel portfolio with additional jobbers—who supply fuel to independent retailers—in our mix of customers," he said.

Sunoco LP is majority owned and managed by ETP, which also owns Sunoco Inc. and Stripes LLC. ETP has indicated it plans to bring Sunoco Inc. and Stripes LLC together under Sunoco LP through a series of asset dropdowns—or sale of assets from parent company to subsidiary—from ETP to Sunoco LP. The first dropdown included distribution business to Aloha Petroleum in Hawaii in December 2014 and Mid-Atlantic Convenience Stores (MACS) in Virginia, Maryland, Tennessee and Georgia in October 2014.

In this second dropdown, SUN will pay $775 million in cash and issue $40.8 million of SUN common units to ETP Retail Holdings, based on the five-day volume-weighted average price of SUN's common units as of March 20, 2015.  SUN expects to fund the acquisition using proceeds from the private offering of senior notes that was also announced Monday.

Sunoco LLC distributes motor fuels across more than 26 states in the United States to:

The transaction is expected to close in April, subject to customary closing conditions and completion of financing arrangements. It is expected to be immediately accretive to distributable cash flow of both SUN and ETP for 2015 and beyond.