DALLAS -- Robert "Bob" Owens, president and CEO of Sunoco LP, is retiring as of Dec. 31 after more than 20 years with Sunoco and its predecessors. Effective immediately, Joe Kim, who has held the position of executive vice president and chief development officer for Sunoco since 2015, has been appointed president and COO.

Dallas-based Sunoco LP is a master limited partnership (MLP) that operates 1,355 convenience stores and retail fuel sites and distributes motor fuel to 7,825 c-stores, independent dealers, commercial customers and distributors located in 30 states. Sunoco is selling approximately 1,100 company-operates sites to 7-Eleven Inc. in 18 states—approximately 110 in Florida, 450 in New York and 550 in Texas—for $3.3 billion, the companies said in April. Irving, Texas-based 7-Eleven is also acquiring the trademarks and intellectual property of the Stripes c-store brand and the Laredo Taco Company foodservice brand, which Sunoco gained when it purchased Susser Holdings Corp. for about $1.9 billion in 2015.

Owens, who joined Sunoco Inc. in 1997, has held the position of president and CEO since 2012, and he will continue as CEO until his retirement and will then serve as a consultant to the partnership through 2019. 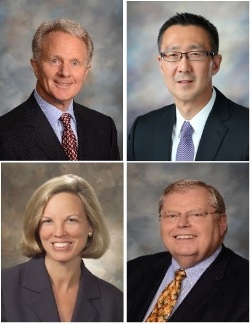 “We thank Bob for his many years of strategic leadership, which has resulted in an impressive list of accomplishments for both the employees and the unitholders of Sunoco and wish him and his family the best,” said Kelcy Warren, chairman of Dallas-based Energy Transfer Equity, the entity that owns the general partner of Sunoco. “While we are sad to see Bob go, we are excited for the next generation of leadership at Sunoco to take on larger roles. Joe is an exceptionally talented leader, and he has played a significant role in the planned transformation of the partnership from a retail-based business into a premier nationwide fuel supplier.”

“Additionally, the appointment of Joe as president and COO and Bob continuing as CEO through year-end will ensure an orderly transition as we move through the divestment of our retail operations during the coming months,” said Warren.

Kim (top right) has been responsible for Sunoco LP’s strategic development and planning, overseeing both business development and Sunoco’s real-estate portfolio. Prior to joining Sunoco, he held various executive positions, including COO of Pizza Hut and senior vice president of retail strategy and growth for Valero Energy. He began his career with Arthur Andersen.