HOUSTON -- A dozen years ago, the Speedway and SuperAmerica c-store chains joined together into a retail powerhouse that encompassed some 2,400 stores across the Midwest and Southeast. Although Speedway SuperAmerica LLC (SSA) has since whittled down to 1,600 locations, it remains a c-store giant.

But with Marathon Oil Corp.'s plansas reported in a Morgan Keegan/CSP Daily News Flash yesterdayto sell a sizeable piece of its upper Midwest downstream presence, the SuperAmerica portion of that merger may be no more.

The integrated oil company has entered into a nonbinding letter of intent with ACON Investments LLC, NTR Partners LLC and TPG Capital LP for the sale of 233 company-op and franchised SuperAmerica sites in the upper Midwest, the SuperMom's Bakery commissary, Marathon's St. Paul Park refinery and terminal, interests in pipeline assets and associated inventories. The company confirmed that with the sale, Speedway SuperAmerica would have only one remaining SuperAmerica site.

The decision to sell the upper Midwest assetswith an estimated transaction value in excess of $800 millionto the three private-equity firms was simply another chapter in the company's efforts at rationalizing its assets to provide capital for investments on the downstream and upstream, said Marathon Oil spokesperson Robert Calmus.

"On an on-going basis.... Marathon reviews its asset portfolio, and we want to make sure the assets are fully aligned with the company's business plans," Calmus told CSP Daily News. "As part of the review, we determined a sale of the downstream assets in Minnesota would do two things: One, it would enable us to capture the true value of these assets by selling them as a package, not just a refinery or c-stores. Secondly, it would enable us to redeploy the proceeds of this potential sale into growth projects that are more in line with our long-term business plans."

Calmus could not comment on how the sale developed or whether there were other potential buyers for the assets, only noting, "The market value is enhanced by being a complete package."

"They've certainly indicated that they continue to look to high-grade their portfolio," Kohler told CSP Daily News, "given they would prefer to have a little bit better balance between their upstream and downstream operations, so certainly this doesn't come as a huge surprise."

Compared to other integrated oil companies, Marathon has a stronger downstream exposure. Kohler said a package sale is not atypical in the integrated refining business since the Minnesota stores are the main customer for the St. Paul Park refinery.

Oil analyst Mark Gilman, with The Benchmark Co. LLC, New York, was somewhat surprised by news of the sale, telling CSP Daily News that Marathon had never before shown much intent to rationalize large portions of its downstream portfolio, except for a sale of 15 Illinois sites to Alimentation Couche-Tard in 2008. The most likely scenario, he said, was that Marathon was approached about selling the retail assets, which he described as "probably the strongest piece of the overall package."

"I would suggest this is probably one of the weaker refineries in the portfolio; it's at a geographic extreme, if you will, to their regional marketing area," he said of the 74,000-barrel-per-day St. Paul Park refinery, which is the smallest of Marathon's seven refineries. Gilman speculated that the retail network and refinery were a package dealand a one-off deal at that.

"If anything, they've been the acquirer," said Gilman, citing Marathon's acquisition of the other half of the Marathon Ashland downstream venture. Indeed, SSA is the end product of some 30 mergers and acquisitions over the past 120 years. "It's a little unusual, at least in my mind, to structure a sale of refining assets with retail, but I figure that there was a required link between the two, probably on the part of the buyer. The buyer wanted the retail, and Marathon said, 'Hey, you have to take the refinery along with it'."

Both Gilman and Kohler consider the transaction's estimated value of $800 million to be fair for current market conditions, which are decidedly soft because of weak refining margins and diminished profitability for the sector. "There are a lot of refiners with assets on the market, but they're slow going," said Kohler. "The valuation levels have come down very significantly from the middle of the decade."

The sale also includes Marathon's entire SuperAmerica network of 166 company-owned, company-operated locations, with 159 in Minnesota, one in South Dakota and six sites in Wisconsin. In addition, Marathon is selling SuperAmerica Franchising LLC and the franchise rights to its 67 franchised locations, including 61 in Minnesota, five in Wisconsin and one in South Dakota.

Only one SuperAmerica sitea location in Kentuckywould remain in the entire network, Calmus confirmed. With this the case, a change in branding for SSA certainly becomes relevant.

Another part of the sale is SuperMom's Bakery, which supplies the Minnesota sites. Speedway SuperAmerica's distributor, Eby-Brown, provides the retailer's 7th Street Deli program to the rest of the store network.

Regarding the branding of the Minnesota retail assets, Calmus said no final decision has been made. "Because this is at a letter-of-intent level, there's still quite a bit of investigation, due diligence to be done," he said. Should the transaction proceed, he said, Marathon will continue to operate the refinery, terminal, retail locations and SuperMom's Bakery for a certain period of time, and during that time, will retain their current branding. Marathon hopes to close the sale by late third-quarter 2010.

Meanwhile, Marathon will continue to have a branded fuel presence through its jobber network in Minnesota. Calmus was unable to comment on whether the sold Minnesota sites would be rebranded Marathon. He did emphasize, however, the company's overall commitment to downstream. "We're still very involved through Speedway SuperAmerica, the other refineries, terminals, and supplying c-stores with quality fuel," he said. "We still believe very much in those assets." 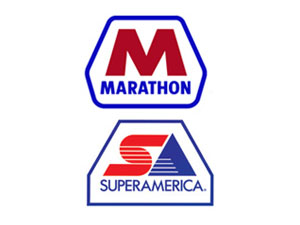