SAN ANTONIO & HOUSTON -- In what CEO and president Gregory Goff  said "truly is a transformative acquisition for Tesoro," the company is buying the ARCO retail network as part of the board-approved $2.5 billion purchase of BP's integrated Southern California refining and marketing business. 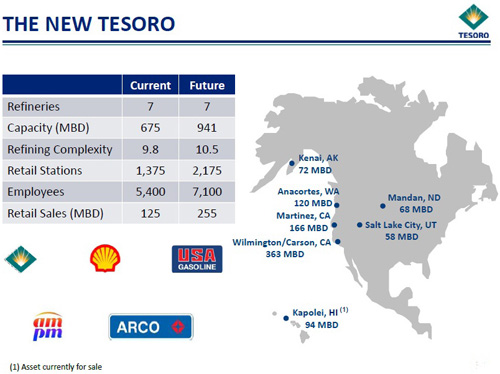 "The combination of BP's assets with Tesoro's in Southern California creates a world-scale refining complex with an integrated marketing and logistics system," Goff said during a conference call announcing the deal. "The acquisition also increases the overall size of Tesoro to just under one million barrels-a-day refining throughput capacity with almost 2,200 retail stations and an extensive logistical system."

The price of BP's assets is $1.175 billion, plus the value of inventory at the time of closing. At current prices, the company valued the inventory at approximately $1.3 billion.

Along with the Carson, Calif., refinery--located south of Los Angeles and adjacent to Tesoro's Wilmington, Calif., refinery--and other refining and logistics assets, the transaction includes about 800 dealer-operated retail stations in Southern California, Nevada and Arizona.

As reported in a Raymond James/CSP Daily News Flash on Monday, Tesoro will also be acquiring the "well-established" ARCO brand and associated registered trademarks, as well as a master franchisee license for the ampm convenience store brand.

"We are excited about the addition of 800 high-quality, high-volume dealer retail stations," Goff said. "This includes about 60 company-owned, dealer-operated sites, which we intent to sell post-closing, while still maintaining supply to the sites. The average volume per month of these sites, 245,000 gallons, is approximately double the average relative to our existing retail network."

He added, "We expect these assets to generate a sustainable $25 million in annual EBITDA with the ability to grow the retail business going forward."

Tesoro is keeping the ARCO brand, said Goff. "We've purchased the ARCO brand. We believe that is a very high-quality, strong brand."

He said that it was "too early" to say whether the company would convert any of the sites to other brand flags. "We don't have Tesoro sites in California. In California, our two primary brands today are Shell and USA, and our intention is to keep it that way. We're transitioning Thrifty--we have introduced Thrifty into there as well--so right now, we're positioned where we want to be with the brands."

BP will sell the ARCO retail brand rights and exclusively license those rights from Tesoro for Northern California, Oregon and Washington and continue to produce transportation fuels at its Cherry Point, Wash., refinery. BP will retain ownership of the ampm c-store brand and franchise it to Tesoro for use in the Southwest.

The sale is part of BP's previously announced plan to reshape its U.S. fuels business. "[The] announcement is a significant step in the strategic refocusing of our U.S. fuels business," said Iain Conn, CEO of BP's global refining and marketing business. "Together with the intended sale of [the Texas City, Texas, refinery], this will allow us to focus BP's operations and investments exclusively on our three northern U.S. refineries, which are crude feedstock advantaged, and their large and important marketing businesses. … As an established refiner and marketer, Tesoro provides a strong future for the business and for its employees."

In February 2011 BP announced plans to refocus its refining and marketing business on its northern U.S. refineries and find buyers for the Carson and Texas City refineries. BP is currently in the process of carrying out a number of major investments in its other U.S. refineries.

"We are pleased to be delivering on the plan we announced last year and when complete we will have a smaller, but well-positioned and very competitive portfolio of refining and marketing businesses in the U.S.," Conn added. "BP remains committed to supplying U.S. customers with the fuels, lubricants and petrochemicals they depend on while at the same time delivering long-term growth and profits to our shareholders. We are investing heavily in the capabilities of our businesses in line with that commitment."

The transaction is subject to regulatory approval, and the companies expected it to close before mid-2013. Tesoro said that it expects to finance the deal initially through a combination of cash and debt with proceeds from the subsequent sale of the associated logistics assets to Tesoro Logistics LP generating an estimated $1 billion of cash proceeds in the first year.

"Clearly, this transaction reflects our strong commitment to the West Coast market, which has been and will continue to be a core market for Tesoro," Goff said.

"This transaction is a unique opportunity for Tesoro to combine the best aspects of two West Coast refining and marketing businesses resulting in a more efficient integrated refining, marketing and logistics system," he said. "Given Tesoro's existing operations on the West Coast and our understanding of the complexities and challenges of operating in California, we are well positioned to generate significant operational efficiencies, increase our ability to satisfy market demand and reduce stationary source air emissions."

Houston-based BP markets more than 15 billion gallons of gasoline every year to U.S. consumers through more than 11,000 BP and ARCO branded retail outlets and supplies more than four billion gallons of fuel annually to fleets, industrial users, auto and truck manufacturers, railroads and utilities. BP is the single, global brand formed by the combination of the former British Petroleum, Amoco, Atlantic Richfield (ARCO) and Burmah Castrol. BP is a global producer, manufacturer and marketer of oil, gas, chemicals and renewable energy sources.

San Antonio-based Tesoro is an independent refiner and marketer of petroleum products. Tesoro, through its subsidiaries, operates seven refineries in the western United States with a combined capacity of approximately 675,000 barrels per day. Tesoro's retail-marketing system includes over 1,375 branded retail stations, of which nearly 590 are company operated under the Tesoro, Shell and USA Gasoline brands.