ANKENY, Iowa -- Speaking about a wide array of potential challenges and opportunities from the price of cheese to the new Walmart to Go convenience store concept, officials with Casey's General Stores Inc., one of the nation's largest publicly traded c-store chains, addressed a number of issues that may affect its projected growth plans. 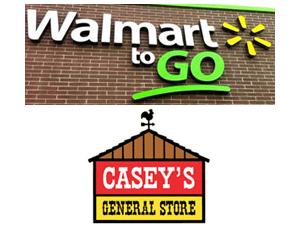 In a fiscal year-end earnings call on Tuesday, executives with the 1,808-store chain based in Ankeny, Iowa, addressed the "headwinds" it faces on numerous fronts:

Walljasper also answered questions about growth, especially with the building of its second distribution center, located in Terre Haute, Ind. He said the site would be completed within 12 to 16 months after breaking ground and would eliminate three-day hauls, allowing for more efficient deliveries and the potential for growth further east.

Walljasper spoke positively overall about the company's earnings figures, encouraged by both the economy in its markets as well as the numbers they have seen with their new and remodeled stores.

For the fiscal year, Casey's built 44 new c-stores, acquired 28, replaced 20 and completed 25 major remodels. They converted another 100 c-stores to 24-hour locations, which brought between a 20% and 30% lifts in sales, he said. The addition of pizza delivery brought 25% to 30% increases in pizza sales, with 80 stores converted in 2014 and an equal number planned for 2015.

"We continue to execute our prudent growth strategy of blending new-store growth with acquisitions, and reached a milestone in the fourth quarter as we now operate over 1,800 stores," said Robert Myers, chairman and CEO for Casey's.

"We're pleased with our performance and excited about growth," concluded Walljasper.

Officials did not offer additional details about the company's announcement on Monday naming Terry Handley, its current COO, as its new president.

Handley, who will retain his COO role, has been with the company for more than 33 years and has served in various capacities including director of marketing, vice president of foodservice and senior vice president of store operations.