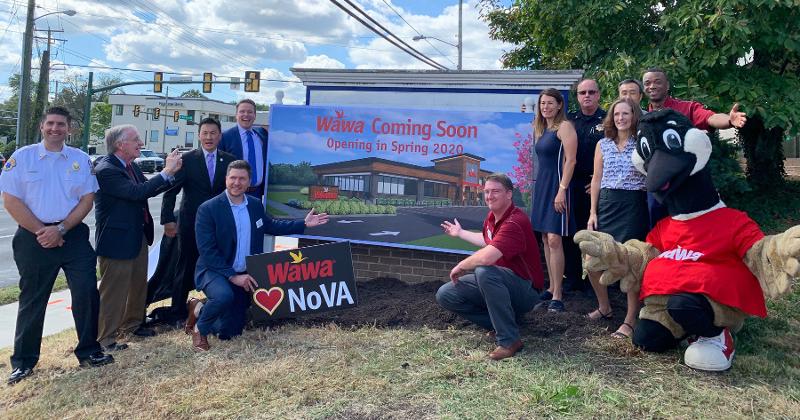 VIENNA, Va. — Wawa Inc. unveiled significant expansion plans for Fairfax County and Northern Virginia with the start of construction on its first convenience store in Vienna, Va. Starting in 2020, Wawa plans to open two to three new stores per year in Northern Virginia, with the goal of having 40 new stores in the market in the next 15 years, resulting in 2,000 new jobs.

The new store will open in April 2020 in a former Coldwell Banker office, and there are four additional projects in the development pipeline in Fairfax County.

Attendees at the Vienna event Sept. 24 got a first look at Wawa’s new approach to convenience with the debut of plans to convert an existing building to a new food and beverage destination “designed to bring the community together,” the retailer said. This is the first retrofit of an existing building for Wawa as the company prepares for further expansion into the northern Virginia communities with a neighborhood-style or “boundless convenience” prototype, it said.

The new c-store will feature a custom, innovative new design with a focus on food and beverage including seating areas. The full Wawa food and beverage offer will be featured, along with seating inside the store. The store will be 6,290 square feet with cedar vintage wood siding and “lush” landscaping, the company said. The site will not include fuel, but it will feature Tesla charging stations for up to eight vehicles, and Wawa announced a three-year Tesla lease giveaway to be featured as part of the 2020 grand opening event.

Wawa Inc., a privately held company, has more than 860 convenience stores, with more than 600 offering fuel. The Wawa, Pa.-based retailer is No. 9 in CSP’s  2019 Top 202 ranking of c-store chains by number of retail outlets.