POWELL, Tenn. -- Convenience-store retailer Weigel's Farm Stores Inc. was among the companies and individuals recognized in nine categories at the 12th annual Pinnacle Business Awards Gala hosted by the Knoxville (Tenn.) Chamber of Commerce. The organization named Weigel's as the winner of the Large Business Excellence Award. 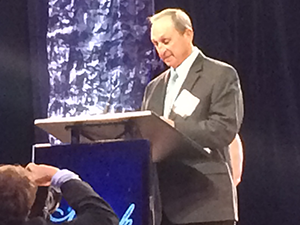 The Large Business Excellence Award recognizes an eastern Tennessee business with 201 or more employees that has shown remarkable profitability, growth and stability. Given Weigel's success in the region, a committee made up of the chamber's board of directors selected the chain over two other nominees.

Weigel's started 85 years ago as a small dairy, producing raw milk in 10-gallon cans and selling it for 9 cents a gallon. Today, the Powell, Tenn.-based family-owned business has 63 convenience stores stretching from Greenville to Crossville and employs 850 people.

In 1931, William Weigel Sr. transformed a 600-acre vegetable farm into a dairy farm and started delivering two cases of pints of milk to a small grocer on his way to school at the UT Agriculture Farm. When 60,000 people arrived to work in Oak Ridge in 1941, the dairy grew from one delivery truck to three, and by 1956, it had a fleet of 31 trucks.

Once more people began working outside the home and were no longer present to receive the milk delivery, Weigel changed the business model and opened the first drive-in milk depot in Knoxville, Tenn., in 1958, calling it Weigel's Jug O'Milk.

When now CEO Billy Weigel joined the family business in 1962, he realized the drive-thru concept was not viable and opened Knoxville's first convenience store in 1964. The company then introduced self-service gasoline pumps to Knoxville in 1970 at its location in Powell.

After purchasing a bakery facility in 2014, the chain now offers fresh delivered-daily doughnuts, cookies, muffins and biscuits. It is also offering healthier, fresh and made-to-order items.

Between 1999 and 2015, Weigel's has invested more than $120 million in new-store construction, and it is on track to invest another $12 million this year, a company official said.