FERGUSON, Mo. -- This week, QuikTrip Corp. erected fences around two of its convenience stores in Ferguson, Mo., closed after rioting and looting resulted in the destruction of one of the stores following the Aug. 9 shooting by police of Michael Brown in an incident that is still under investigation by local officials and the U.S. Department of Justice. 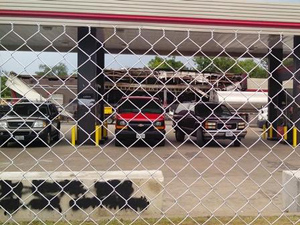 The store that was looted and burned down was near the scene of the incident and has become a focal point for demonstrators. The company shut down the second store as a precaution, it said. It has also removed the gasoline from the underground storage tanks.

QuikTrip CEO Chet Cadieux, speaking at the International Council of Shopping Centers' Oklahoma Idea Exchange in Oklahoma City earlier this week, said all QuikTrip stores have heavy security and surveillance systems, including those in Ferguson.

"The people who are causing trouble aren't even from Ferguson," he said, according to a report by The Tulsa World. "They're opportunistic people coming into the area for looting."

He said the company has not yet had a chance to decide whether the Ferguson QuikTrip would be rebuilt. But he said the unrest had been the first trouble the company experienced at that store since it was built in 1989.

"Ferguson is a good, affluent area," he said. "It's just that you get to a point that there's a deep sense of social outrage, and what happened in Ferguson could happen anywhere."

Shortly after the store was destroyed, the company posted this statement on its Facebook page: "Thank you for the outpouring of support and concern regarding our Ferguson, Mo., QuikTrip location and the good people working at the store. Our employees and customers are our priority in this situation, and we are grateful to share that all QuikTrip employees are safe and unharmed."

Click here to view the outpouring of support for the company and its employees.

Mike Thornbrugh, spokesperson for the Tulsa, Okla.-based convenience store chain, told CSP Daily News, "What we do when there is a traumatic or potentially traumatic event is we have expert counselors in place in case our [store associates] need support."

As for the displaced Ferguson employees, he said, "When they are comfortable to come back, we'll re-assign them to another store. We will take care of them one way or another, no matter what."

QuikTrip: ADA Changes 'Made Us a Better Company'