CARACAS, Venezuela -- Venezuela, strapped for cash at home and staring down costly litigation overseas, is considering a deal for CITGO Petroleum Corp. and other assets, according to a CITGO document obtained by The Wall Street Journal. But the suggestion by Venezuelan Petroleum Minister Rafael Ramirez that state-run oil company Petróleos de Venezuela SA (PDVSA) would sell off some or all of its U.S. refinery holdings does not appear to be drawing much interest from independent refiners, according to an Argus report. 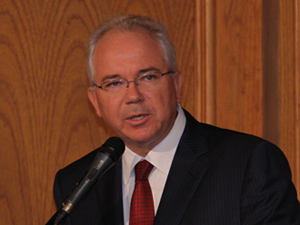 As reported in CSP Daily News earlier this week, Ramirez said that it would sell CITGO "as soon as we receive a proposal that serves our interests."

CITGO has three U.S. refineries with combined capacity of approximately 750,000 barrels per day. They are in Lemont, Ill., Lake Charles, La., and Corpus Christi, Texas. Independent marketers sell CITGO-branded motor fuels through approximately 6,000 gas stations and convenience stores in nearly 30 U.S. states. It is too soon to speculate on whether or how a sale of CITGO would affect that independent retail network.

A July 15 bond prospectus for CITGO cited by the Journal states that PDVSA "is currently seeking to monetize its ownership interest in us."

A spokesperson for PDVSA told the paper he had no information on any potential asset sales.

Anthony Szabo, a former PDVSA executive who maintains ties with the investment community and among intermediaries who work with Venezuela's government, told the paper that three unknown prospective buyers have made offers to PDVSA.

Some analysts estimate that the most PDVSA stands to make from a sale of CITGO is between $8 and $10 billion, said the report.

Several refiners offered their opinions on the opportunity--or lack thereof.

"I think we've consistently said we have better opportunities to invest in our midstream and chemicals business," Phillips 66 CEO Greg Garland told the publication.

Valero Energy Corp. did not rule out adding refining capacity, but has focused more on midstream and chemicals, said the report.

Tesoro Corp. CEO Greg Goff said he wasn't aware of any midcontinent assets offered for sale. "If any particular assets that we believe would be very strategic and fit our business model that could be acquired and be accretive to the company, we would very, very seriously look at those," he told the publication.

"It's certainly something we would follow up on," PBF Energy chairman Tom O'Malley told Argus.

"My view is anything in the U.S. Gulf coast, anything in the midcontinent, in the [Rocky Mountains] would probably be our sweet spot," CVR Energy CEO Jack Lipinski told the publication.

The report also mentioned Par Petroleum Corp. among a handful of new players that may be in a better position to bid on CITGO assets.