In April 2016, Andy Jones had a “perfect storm” warning for the year ahead: Watch out for a combination of high direct-store operating expenses (DSOE), falling transactions and shrinking margins. 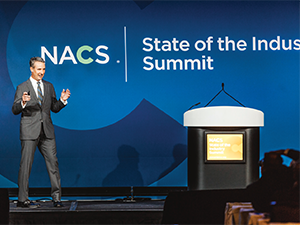 One year of record inside sales and atypically high profits later, Jones, president and CEO of Sprint Food Stores, Augusta, Ga., gave c-store retailers the all clear—with one caveat.

“While the perfect storm did not materialize—thank God—the same storm conditions are still hanging around for 2017,” said Jones while presenting at the 2017 NACS State of the Industry Summit.

Total DSOE rose more than 6%, according to preliminary results from the NACS State of the Industry Report of 2016 Data. Transactions also grew, but the rate of growth slowed from the year prior. And fuel margins got squeezed, with pool margin off 1%.

For the “outlier” years of 2014, 2015 and 2016, fuel helped drive overall industry profits, Jones said. Low oil prices kept gasoline prices down, driving demand. However, “all great operators know we cannot control what happens with fuel,” he said. “We must concentrate on what we can control, which is the inside of the stores.”

In this respect, the industry is doing well. Over the last 36-month period, total c-store merchandise sales rose 10%. In 2016, eight out of the top 10 in-store categories had positive growth in sales and gross-profit dollars.

Tobacco supplied the greatest share of in-store sales at 36%, followed by foodservice at 21.7% and packaged beverages at 15%. The industry’s largest in-store category, cigarettes, continued to lose share of sales. In 2011, nearly 37% of in-store sales came from cigarettes. In 2016, this number slipped to 31%, with falling smoking rates and rising state taxes weighing on sales.

Meanwhile, foodservice generated more than 35% of gross-profit dollars, with packaged beverages (18.5%) and tobacco (18.2%) coming in second and third.

Connect to the Consumer

While merchandise offers some sales and profit opportunity, foodservice continues to act as the ballast against declining cigarette and fuel sales.

In fact, while dispensed beverages may have carried the foodservice category in previous years, prepared foods has since taken on the yoke, as more retailers switch from commissary to made-to-order-sandwich programs. It is the only subcategory with sales and profit growth that has consistently outpaced the category overall for the past 36 months.

On the liquid side of the menu, hot dispensed beverages led in sales and gross-profit dollars per store per month.

Meanwhile, sales of frozen dispensed beverages dropped nearly 10%, with profits off 3.7% in 2016.

“We really need to watch what’s going on with frozen dispensed beverages,” said Jones. “It has seen both sales and gross-profit dollar declines for the last two years.”

With foodservice as the key growth opportunity for c-stores, the industry needs to appreciate the budget constraints of its customers. According to NACS data, 60% of c-store food shoppers have household incomes of less than $40,000.

“We really need to keep this in mind when building our menus and building our promotions,” Jones said. This is especially true as QSRs borrow a page from c-stores and heavily promote dollar and daypart discounts.

Meanwhile, labor-saving technology such as vending kiosks in test at McDonald’s or delivery drones in pilot at Domino’s promise to further reduce costs and help keep prices competitive.

And although c-stores have a built-in convenience advantage, the industry could do a better job of promoting foodservice and other in-store offers, Jones said. In 2012, consumer awareness of c-store promotions was at nearly 34%, according to NACS research. By 2016, that number fell to 17%.

“We can do better,” said Jones, who pointed out that customers purchased items on promotion 36% of the time in 2016, which is more than 2 points lower than in 2013, 2014 and 2015. “The majority of customers only notice our promotions when they’re on our lots.” Many consumers—or nearly 30%—learned an item they purchased was on promotion from signage on the cooler door or store shelf. Another 14.3% were alerted by signs on the store’s windows. Less than 1% saw it on the internet or heard it on the radio.

“There’s a great opportunity to connect with them when they’re not there; we need to figure it out,” Jones said.

Some c-store retailers—the top quartile by store operating profit—clearly are figuring out how to maximize sales. The distance they placed between themselves and other operators in nearly every top 10 in-store category was undeniable in 2016. Their sales of hot dispensed beverages were more than six times higher, while sales of cigarettes, packaged beverages and OTP were about double, according to NACS data.

For everyone else, it pays to study the best practices of these high-performing retailers, especially as the same business dangers linger into 2017.

“There are remedies to combat high direct-store operating expenses,” said Jones. “We have got to grow inside gross-profit dollars. We have got to promote better to increase item sales. And if we decide to reduce margins, we’ve got to be damn sure reductions are increasing the basket spend.” 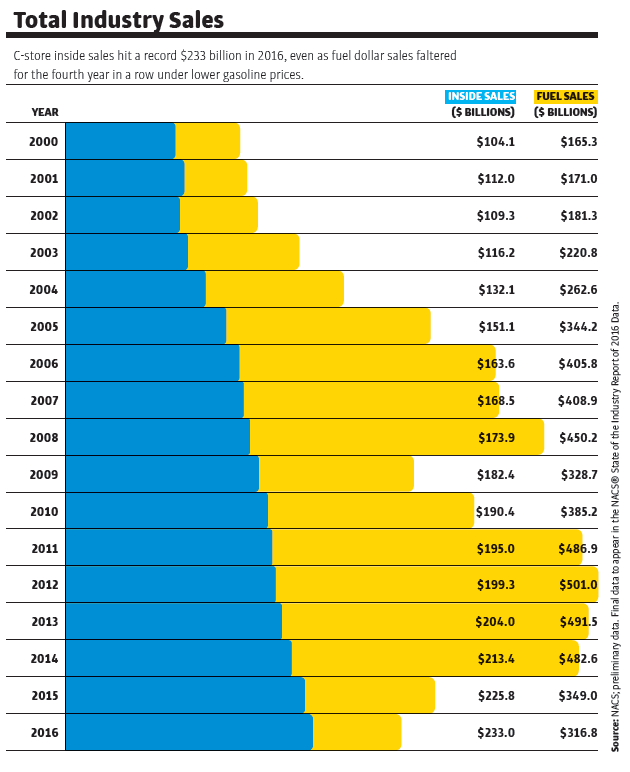