Like a smoke signal heralding good news, optimism among convenience-store and tobacco retailers is rising at the start of 2018. A more open, multidimensional attitude toward the tobacco category has emerged from Dr. Scott Gottlieb, the new commissioner of the U.S. Food and Drug Administration (FDA). 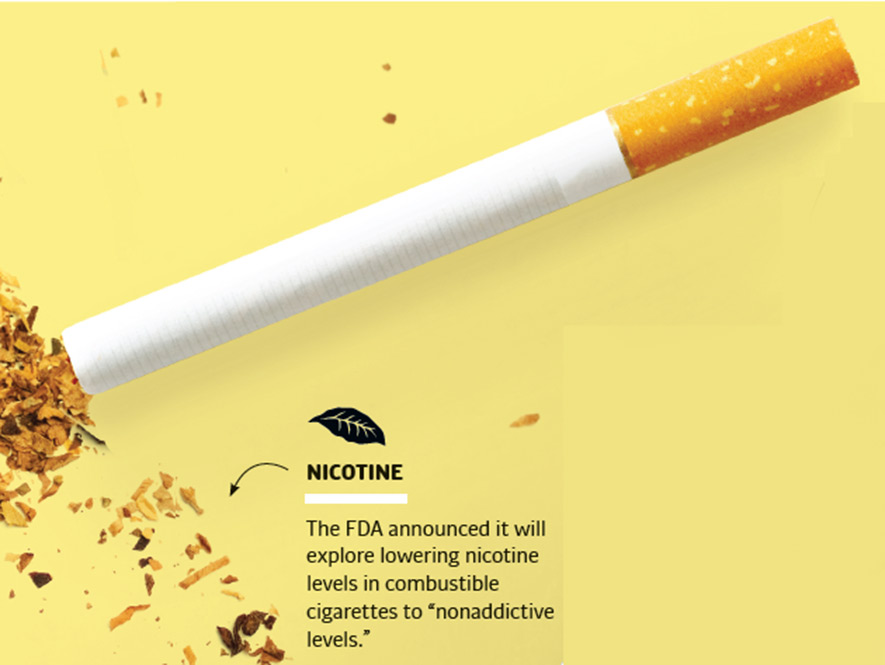 Gottlieb’s revisionist take on the category and promising numbers at the store level—from other tobacco products (OTP) to electronic cigarettes—has Bill McCloskey of Deerfield, Ill.-based Rmarts calling the overall category “vibrant,” with the potential of new and budding subcategories.

“Like everyone else, we are seeing a dramatic increase in multiusers of all tobacco products, especially among the 25- to 40-year-old male age group,” says McCloskey, COO of the 12-store Chicago-area chain. “Cigarette purchases are still there, but they are also supplementing their tobacco needs with pouch snuff , some snus and more electronic use.”

Don Burke, senior vice president of Management Science Associates, Pittsburgh, says the vapor category has been showing consistently strong growth in c-stores for the past 18 months or so and is once again the fastest-growing nicotine category. “Particularly strong is the new vaporizer segment, which is showing growth that’s three to four times its previous-year level,” Burke says.

Despite the good news, retailers are wary of how quickly the tides can turn, especially with the FDA. For example, even though the agency has taken a seemingly more favorable stance on e-cigarettes as it leans toward a modified-risk mindset, it also now hopes to regulate nicotine levels in regular, combustible cigarettes—a vague directive that injects new uncertainty into the market.

“We as an industry will have to adapt whenever [FDA officials] make up their minds as to what they want to do,” McCloskey says.

Everything appears to begin and end with the FDA. The future U.S. entry of iQOS, the heat-not-burn, nicotine-delivery method from New York-based Philip Morris International (PMI), for instance, rests on FDA approval.

Depending on whether the FDA gives it the green light, the product could further stimulate the vaping market, Burke says.

“It’s likely that [iQOS] will draw even more consumer attention to electronic nicotine-delivery products, raising the awareness and growth of the entire category,” he says. “We would expect a new wave of trial as consumers are once again drawn to these alternatives.”

With the FDA and its decisions continually changing the course of the tobacco category, what follows is both a look back and a look forward at the agency’s most significant twists and turns, with retailers riding the uncertainty of every wave.

Because the FDA must always go through a predictable, prolonged process to officially enact new federal tobacco regulation, the industry at least has an idea of what’s coming. Unfortunately, manufacturers and retailers rarely know when those regulations will move from proposal to a final published rule.

For example, retailers waited a year for the announcement of the agency’s final “deeming” regulations, despite the FDA saying they would drop “any day now.”

So the question for the coming year is whether issues such as menthol, modified-risk approvals or smokeless-tobacco regulations will be resolved in 2018, 2019 or years from now.

At the same time, he announced a separate goal to review the potential harm-reduction qualities of alternative nicotine-delivery devices, language that the FDA had refrained from using during the Obama administration and a tone that signaled new promise for the tobacco industry.

Regarding nicotine levels, Gottlieb said the FDA would “begin a public dialogue about lowering nicotine levels in combustible cigarettes to nonaddictive levels through achievable product standards” and issue an Advance Notice of Proposed Rulemaking (ANPRM) for public comments on potential health benefits and unintended consequences of doing so.

“Because nicotine lives at the core of both the problem and the solution to the question of addiction, addressing the addictive levels of nicotine in combustible cigarettes must be part of the FDA’s strategy for addressing the devastating addiction crisis that is threatening American families,” Gottlieb said.

While the FDA has the authority to lower the nicotine levels in cigarettes, Congress has prohibited the agency from lowering them to zero, according to those following the FDA and the category.

“I give Gottlieb credit for laying it out in a cohesive and comprehensive way,” said Bonnie Herzog, managing director of consumer equity research for Wells Fargo Securities, New York, in her newsletter. “But it gets very complicated. If they do reduce nicotine in cigarettes, they’re going to have to do so gradually over a long time because of the unintended consequences.”

Focusing on the Positive

Gottlieb also indicated that harm reduction would be strongly embraced—and even encouraged—with the announcement of a new regulatory program that seeks to lower smoking rates and encourage smokers toward less harmful alternatives.

“Envisioning a world where cigarettes would no longer create or sustain addiction, and where adults who still need or want nicotine could get it from alternative and less harmful sources, needs to be the cornerstone of our efforts,” Gottlieb said in the announcement. “We believe it’s vital that we pursue this common ground.”

The FDA made a number of points in support of its new goals, including:

“We need to make sure we strike the right balance between FDA fulfilling its vital consumer protection role while also fostering innovation when it comes to potentially less harmful forms of nicotine delivery,” said Gottlieb.

The tobacco, vaping and convenience industry have largely focused on the positive aspects of the FDA’s new tobacco plans, welcoming the agency’s embrace of innovation and harm reduction.

Marty Barrington, chairman, CEO and president of Richmond, Va.-based Altria Group Inc., expressed enthusiasm in a November call to investors, stating “we have been building a portfolio of the leading platforms of noncombustible, nicotine-containing products for adult tobacco consumers, as well as preparing the scientific case for obtaining regulatory authorizations for them.”

Donnie Smith, vice president and controller for El Dorado, Ark.-based Murphy USA, expressed confidence that the FDA would follow through on its promised review of “real science and understanding the unintended consequences of any regulation” and said retailers like Murphy will benefit.

“We are well-positioned to participate in the new products, their introduction and work in the context of the regulations as they get developed and modified over time,” Smith said in an August 2017 investor  call.

One of the most anticipated alternative-delivery products is PMI’s heat-not-burn device called iQOS, and it’s one of the earliest regulatory announcements expected for 2018.

PMI submitted a PMTA, which would allow iQOS to enter the U.S. market, in March 2017. It was accepted for scientific review in August. By the agency’s own guidelines, a decision should be made within 180 days of that acceptance—just after this article’s press time.

In terms of the product itself, Philip Morris and Altria Group Distribution Co. (who have a technology-sharing agreement for Altria to market iQOS in the United States) have provided plenty of information about its global performance. During an investors call in November 2017, Altria said iQOS sales have topped $1 billion in the 30 global markets where it has launched.

During the call, Sarah Knakmuhs, vice president of Philip Morris USA’s Heated Tobacco Products group, shared plans for marketing iQOS stateside. These plans include starting with a yet-to-be-announced lead market and expansion markets in major metropolitan areas (selected based on smoking population, regulatory environment and the presence of strong retail partnerships) and an education campaign similar to the company’s “This Changes Everything” global initiative. She said the iQOS stores seen  globally (upscale pop-ups set up for trial and purchase) are just one of several retail execution strategies being considered—and that Altria’s existing retail partners will also play a big role in the launch. The “This Changes Everything” claim has certainly rung true in Japan, where iQOS had already generated a 10% market share as of last summer.

Nik Modi, tobacco analyst for RBC Capital Markets, New York, says he is excited about what a heat-not-burn PMTA approval could mean more broadly for the e-vapor category. “People smoke for the nicotine hit, which they don’t get as effectively with e-cigs,” he said. “Not true with heat-not-burn.”

While optimistic, he also added a note of caution, saying differences exist between consumers overseas and in the United States. One difference, for instance, is with income. In Japan, smokers tend to be more affluent, while U.S. smokers tend to be blue collar, he says.

The FDA is also expected to make some headway on PMI’s modified risk tobacco product (MRTP) application in 2018, especially after the FDA’s Tobacco Products Scientific Advisory Committee (TPSAC) ruled on the iQOS MRTP this past January. While the TPSAC said PMI did not prove iQOS could reduce risk for tobacco-related diseases, the FDA must still make its final determination.

That could take a while. When Richmond, Va.-based Swedish Match filed its MRTP to market General Snus as less harmful than cigarettes, it took the FDA more than a year to rule after its 2015 TPSAC meeting.

While the FDA’s decision was generally unfavorable, it did give Swedish Match until December 2018 to submit additional information supporting its MRTP application. And PMI leadership remains optimistic for iQOS. “As a next step, we look forward to working with the [FDA] to clarify outstanding points so as to best assist in their ongoing decision-making process, which inherently entails a certain degree of scientific uncertainty premarket,” said Andre Calantzopoulos, CEO of PMI. “As the FDA routinely does with regard to the many products it regulates, I believe the agency will ultimately address that uncertainty in the best interest of people who smoke.”

If the FDA rules in favor of allowing iQOS to be marketed as a lower-risk alternative to cigarettes, the implications for the tobacco industry would be enormous. It would mark the first time the FDA has ever allowed a tobacco product to market itself as reduced harm and would set the standard for what’s required of MRTP applications moving forward.

A positive decision would also likely incentivize other tobacco companies to continue to invest in reduced-harm products by demonstrating that there is a pathway to market. It’s something Altria is already betting heavily on: During its November investor call, the company cited plans to file MRTPs for Copenhagen Snuff and MarkTen e-cigs in 2018.

“They’re going to be very active in this reduced-risk space in the next couple years,” Modi said of Altria.

As further evidence that the FDA will support innovative products that fall on the lower end of the continuum of risk, Gottlieb co-authored a December 2017 article suggesting that electronic cigarettes could soon be included as FDA-approved nicotine replacement-therapy products (NRTs).

The article announced the formation of the Nicotine Steering Committee, saying the group will be “re-evaluating and modernizing the FDA’s approach to development and regulation of nicotine replacement-

therapy products that help smokers quit.” It went on to acknowledge that public debate has surrounded “the potential for modified-risk tobacco products like electronic nicotine-delivery systems and e-cigarettes. [The] FDA also sees compelling opportunities to explore additional opportunities for the development of new and improved products.”

This new group could go on to consider “changes to the labeling and indications for existing products … that might deliver nicotine at different rates,” in an e ort to enact policies that are “more helpful in helping smokers quit combustible cigarettes.”

Given the escalation in recent years, 2018 stands to be the busiest year to date in terms of FDA regulations. The real unknown is just how much the agency will actually move the needle—and how far that needle will tip in favor of c-store retailers.