Retailers who sell compressed natural gas (CNG) all seem to have a personal anecdote that demonstrates the incredible price stability of the alternative fuel. 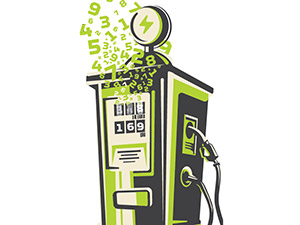 Ask Scott Minton, who heads up CNG market development for OnCue Marketing LLC’s OnCue Express chain, Stillwater, Okla., about his time-lapse video of a fuel price sign outside a store. The gasoline price keeps inching up and down, up and down; diesel makes the occasional shift. CNG? It stays the same, for the entire 18-month time frame.

Or Joel Hirschboeck, superintendent of commercial and alternative fuels for Kwik Trip Inc., La Crosse, Wis., could tell you about how much brighter the CNG price appeared compared to gasoline at one of his sites. That’s because the light-emitting-diode (LED) bulbs that glow with CNG’s price never changed, while the bulbs showing the gasoline price dimmed and burned out from frequent change.

Price stability has always been a key competitive advantage for CNG against gasoline and diesel. But as a glut of oil supply ushered in the lowest gasoline prices in a decade, narrowing CNG’s once-hefty discount, that stability has become an even more critical factor in the competitive nature of the product. Retailers are trying to sell fleet managers on the long-term view, looking forward to when gasoline and diesel prices will inevitably rise.

“Two years ago, when gas was $3.50 or $4 a gallon, managers still took six months to pull the trigger,” says Minton. After watching how little CNG prices changed during that time, these fleet managers understood the stability argument. “Now with gas at $2 or under, it’s a very difficult conversation to have.”

Minton encourages fleet managers to test a CNG-powered truck just to gain experience with the vehicle’s operation and maintenance so that when gasoline and diesel prices inevitably rise, they will be ready.

“What would happen if gas hits $3 or $4? What is your cutoff point where you need to have CNG to just remain relevant within your own market segment?” says Minton, modeling his question for potential customers. “Be ready for it to come back, and be prepared, because when it does, you don’t want to be caught off guard.”

Turn Up the Volume?

At OnCue Express, which has 20 CNG fueling locations within its nearly 50-site network, volumes have weathered not only heftier price competition from gasoline and diesel, but also the retreat of a major customer.

OnCue started in the CNG fueling business with the encouragement and support of shale-gas producer Chesapeake Energy, which was growing its own natural-gas vehicle (NGV) fleet and wanted to build the market for the fuel. The first several OnCue Express CNG fueling sites were built to serve Chesapeake. But as Chesapeake’s fortunes have turned over the past couple of years—the company was hit hard by the crash in natural-gas prices—it stopped fleet conversions and additions to its NGV numbers.

Surprisingly, however, OnCue’s CNG volumes did not crash. That’s because other fleets were also visiting its CNG sites and were able to pick up the slack.

“Some of that has changed over the last year with gasoline prices being so depressed,” says Minton, who joined OnCue in 2013 from Chesapeake, where he educated fleets on CNG’s potential. “We’re seeing just a flat volume, without a whole lot of growth.”

He interprets this flatness in per-site volume as a sign that other fleets are still converting over to CNG, even as Chesapeake dials back. Otherwise, OnCue’s volumes would be decreasing.

OnCue’s total CNG volumes have improved year over year as it adds new sites. While Minton declines to share an average volume figure, he says a CNG site begins to become profitable at 10,000 gasoline gallon equivalents (GGEs) per month, while 20,000 GGEs is considered healthy. Most of these high-volume sites are in northwest Oklahoma, home to many oil and gas  companies, and Oklahoma City, with its high population base.

More than half of OnCue’s locations have volumes greater than 10,000 GGEs, with four to five right at that baseline and few others “subpar.”

“If a site is not at 10,000 GGEs at a minimum, I’m looking for fleets in the area, and that’s where I spend the majority of time trying to … develop the market in and around those sites,” Minton says.

Despite the challenging demand environment, OnCue plans to add three to five CNG sites per year for the next decade,  prioritizing new stores that are close to a natural-gas pipeline to minimize costs. The retailer typically spends $1.2 million to $1.5 million on a CNG site, with much of that cost going toward 250- to 500-horsepower compressors to provide fast fills for heavy-duty trucks.

While this is a hefty price tag, OnCue is able to take advantage of a state income-tax offset that lets it recoup 75% of hard costs at the end of each year.

Today, all of OnCue’s new CNG locations are speculative. Similar to what he did in his role at Chesapeake, Minton visits with local fleets to discuss CNG’s long-term potential.

Fleets are often concerned that natural-gas prices will rise after they spend the money to convert. Minton points to historical data, however, that shows natural-gas prices tend to have a close ceiling and floor. In Oklahoma, CNG has typically stayed between $1.10 and $1.60 per GGE for the past few years.

And growth nowadays is measured in smaller increments. For example, maybe a fleet converts one truck to CNG or leases an NGV to test. Oklahoma has a one-time 45% tax credit on a new NGV purchase or conversion.

Minton encourages fleet managers to consider the fuel savings over the average five-year ownership of the NGV: an average of $1 per gallon, based on projected gasoline and CNG prices.

“To be honest,” he says, “what fleet managers are not doing is saying, ‘I’m ready to pull the trigger on converting my entire fleet.’ ”

At Kwik Trip, which has more than 500 c-stores in Wisconsin, Minnesota and Iowa, the timing of the oil price crash—and subsequent drop in gasoline prices—“played out for good or bad,” says Hirschboeck. With 34 CNG fueling sites built by the end of 2015, Kwik Trip had just about reached the maturation point.

“With 34 locations, we have a functional network in our footprint of Wisconsin, Minnesota and Iowa, focused on major markets and corridors,” he says. “Now we are looking at new markets to get into: Do we need redundant stations in some markets because they are doing so well, or another corridor? We also are looking at customer interest—a fleet customer willing to  contract committed volume at a specific location.”

When Kwik Trip entered the CNG business in 2012, volumes leapt dramatically year over year. Its second-year volumes were triple that of its first, while the third year nearly tripled the second.

For 2015, Kwik Trip is expecting CNG volumes to flatten or experience modest growth. “But it’s been fairly strong growth up to this point,” says Hirschboeck. “We’ll see how things develop over the next year. There are still some folks moving into it, but fence sitters are still on the fence today.”

Making the sell to fleets has always been a long process, says Hirschboeck, especially new ones.

“Existing fleets that have already converted to natural gas are continuing to purchase NGVs,” he says. “They’ve gone through the challenges and the educational process and now are on the backside recognizing the ancillary benefits beyond just the fuel and price savings.” This includes cleaner emissions, less operating downtime and an improved winter performance, he says.

But fleets do continue to convert. In November, Kwik Trip signed on as the supplier for Central Steel & Wire Co., a Milwaukee-based metal processor, which added three new CNG-powered trucks, operated by Atlanta-based freight hauler TQ Logistics and leased by Ryder System Inc., to its fleet.

“Is it as crazy as it had been or dramatic when oil prices were high? You definitely had a lot more interest and tire-kickers then,” says Hirschboeck. “But the people who are serious continue to be serious and recognize where this is going to be long term.”

Keeping an eye on that horizon, while the oil and gasoline markets work out their supply glut, is going to be key for retailers who sell CNG and the fleets that want a solid business case for sustainability.

“Obviously it’s not the market we want, but it is the market we find ourselves in right now,” says Minton of OnCue Express. “We’re trying to prepare for what might come down the road.”

The relative stability of retail CNG prices stands in stark contrast to the volatility of gasoline. 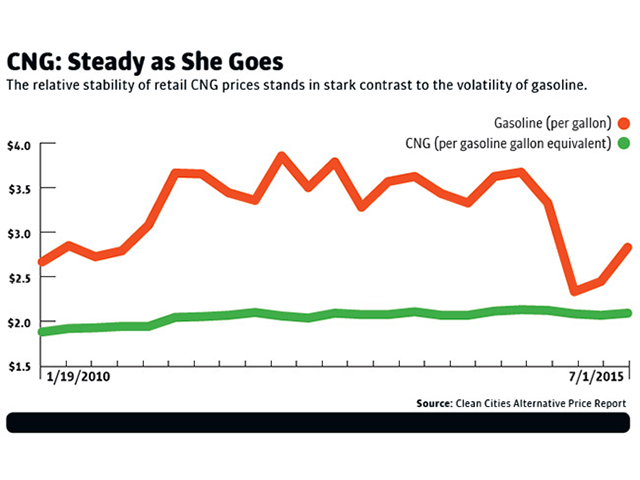 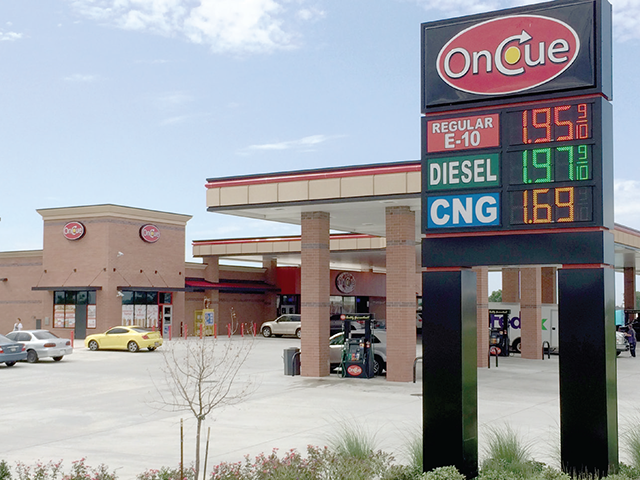 OnCue Express plans to add three to five CNG fueling sites to its network in the next decade.

Kwik Trip’s CNG network has almost reached maturation, but it still has an opportunity to open more sites.