A visionary. A mentor. A pioneer. Chester Cadieux was easily all of these things. 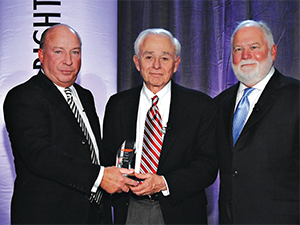 In 2002, Cadieux handed the reins to his son, Chet, and today, Tulsa, Okla.-based QuikTrip is a more than $11 billion privately held company with approximately 700 c-stores in 11 states.

“Chester truly reinvented the industry with larger, more convenient formats, a commitment to keeping the stores refreshed and modern and, most important and impressive, his commitment to people and the customer-service culture that he developed at QT,” says Brian Hannasch, CEO of Alimentation Couche-Tard, Laval, Quebec. “[He was] a true visionary that has forced us all to get better in our own businesses.”

But the always-humble Cadieux insisted he was just lucky.

Dick Wood, former CEO of Wawa convenience stores, credits Cadieux with inspiring Wawa to enter the fuel business. In 1994, Wawa opened its first big store, which featured lots of parking but no gasoline.

Then one day, after a fall Wawa board meeting, Wood received what he calls “a classic Cadieux letter.” It read: “Build the big store with gas. The industry will never have seen anything like it.” So in the summer of 1996—after years of fearing that selling fuel would undercut the freshness perception of its made-on-site foodservice program—Wawa opened its first big store with gasoline in Millsboro, Del. Fast forward to today, and the Wawa, Pa.-based chain operates more than 700 c-stores, about 400 of which sell fuel.

“Chester was a humble, wonderful leader who was a strong force in influencing and shaping the success and the image of Wawa, as well as the convenience-store industry. More than anything, he was a true friend and exemplary human being who will be greatly missed,” says Wood. “He was a mentor to me in many ways.”

This was hardly isolated: Cadieux often conferred with industry leaders on business matters.

In 1988, Cadieux recommended Susser Holdings Corp. (now Houston-based Sunoco LP) close 50% of its stores that were the lowest volume in order to focus on the highest potential locations and build a culture of excellence.

“Due to our financial constraints at the time, we could not immediately follow his wise counsel, but 10 years later, we started building large high-volume sites and aggressively paring the underperformers from the portfolio,” says Sam Susser, former chairman and CEO of Susser. “Cadieux’s advice in 1988 was right on then and it remains so today.”

“[Cadieux’s] willingness to share was always so impressive to me,” he says. “He taught us how to sell more fuel, more fountain, etc. But most of all, he taught us the importance of people. People make the difference, and Chester was committed to his people.”

According to QuikTrip, Cadieux’s secret to success was “hire good people and promote from within.”

This legendary focus on people originated in the chaos of a U.S. Air Force radar site, at the tail end of the Korean War. Cadieux, second lieutenant at the time, was in charge of nearly half of the 330 troops on the base.

Fortune has ranked QuikTrip on its 100 Best Companies to Work For list for 14 consecutive years. With more than 19,700 employees today, the company boasts an average turnover of 29%—in an industry with an average of 80%, Fortune reports.

“We need more Chester Cadieuxs in our industry if we want to be better retailers and win in this uncertain future,” says Alain Bouchard, founder and executive chairman of the board for Alimentation Couche-Tard. 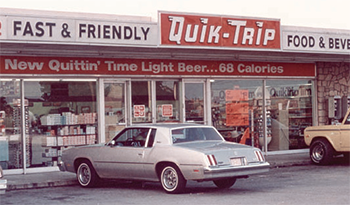 In 1958, Chester Cadieux was working as a door-to-door salesman when he ran into Burt Holmes, an old schoolmate. Holmes was looking to start a drive-in grocery store and needed people to invest. Cadieux borrowed $5,000 from his father, thus marking his beginning as a retailer. Along the way, Holmes—hungry for new projects to finance—moved on, leaving the company to Cadieux.

1962: After struggling for nearly four years, QT achieves a positive net worth. It ends fiscal year 1961-1962 with eight stores and total sales of nearly $1.1 million.

1968: Expansion outside of Oklahoma begins with the Oct. 1 opening of store No. 150 in Grandview, Mo.

1971:The chain’s 58th store, located in Tulsa, becomes the first to sell gasoline.

1976: Wyatt Phillips, an Atlanta marketing consultant, is hired to create a new logo. QT is born, and signs began appearing in front of stores.

1977: QT introduces its first fast-food module with the then-revolutionary idea of customers serving themselves.