With more than 3,000 breweries tapping the American landscape, the era of premium-only beer has given way to a broader palate. Like our nation’s culinary diet, which has expanded into a multicultural epicurean delight, beer is enjoying a similar renaissance. Flavorful beverages such as craft beers and hard ciders are on the rise, with new options hitting the market daily. 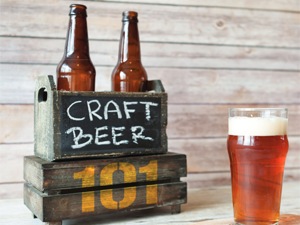 During the first half of the year, American craft-beer production volume increased 18%, reports the Boulder, Colo.- based Brewers Association. During that stretch, craft brewers sold approximately 10.6 million barrels of beer, up from 9.0 million barrels.

For convenience retailers accustomed to A-B and MillerCoors, crafting a craft strategy is daunting. To that end, CSP has created a guide to help you focus on stocking your shelves with what is best for your customers. We also serve you tips from industry pros on how to boost sales in a beverage subcategory that may only be 1% to 5% of your total in-store sales.

“You don’t have to do a whole lot when you’re introducing craft beer into your store, but having a modest selection is good,” advises Tom Fox, partner with CM Profit Group, Troy, Mich. “You don’t want to overinvest in the segment and do too much too soon.”

There are many reasons for adding craft beer, most notably profitability. “If you can get customers to switch their beer selection to craft beer, you can see a 30% to 50% profit increase in the long run,” he says. “It’s beneficial to get into the craft- beer segment because it provides a source of distinction compared to competitors, and many customers will be pleased to see variety on the shelves.”

Customers are looking for variety packs and seasonal flavors along with standby brands. “I would recommend carrying the leaders of both local and national craft beers in demand and let the numbers do the talking,” says Fox. “IPAs (India Pale Ales), seasonals, variety packs, ambers, pale ales and wheat beers are the ones to have right now.”

Overstocking the craft-beer section is not necessary. Most c-stores have grocery competitors nearby, so it’s important to stock what area customers are buying.

Focusing on the latest and upcoming beer trends is your first step. With fall quickly approaching, IPAs and flavored malt beverages (FMBs) are in demand and a top-seller among consumers. Bart Watson, chief economist for the Brewers Association, points to a wide variety of IPAs for each season. It’s important to keep a seasonal rotation, from white to black IPAs, to stimulate consumers’ interest.

The Boston Beer Co., maker of the Samuel Adams line, has also seen a demand for IPAs and flavorful beverages in c-stores, even though less than 15% of its beers are craft. “The hop-forward style of beer is the No. 1 style in the grocery segment and it’s growing significantly across all channels, especially on the West Coast,” says George Ward, director of off-premise accounts for Boston Beer.

With IPAs and other crafts growing share—including a 54% jump in unit sales of microbrews, according to the NACS State of the Industry Survey of 2013 Data— Americans are expanding their taste buds to include flavorful drink options. While this benefits the wave of local breweries, Anheuser-Busch and MillerCoors recognize the trend as well. With the release of Lime-a-Rita and Coors Light Summer Brew, the majors are tapping into consumer demand for citrus and fruity flavors.

Chicago-based MillerCoors has seen its Leinenkugel brand grow to be the No. 1 seasonal beer in c-stores, helped along by the popularity of Summer Shandy, according to Brendan Noonan, director of channel marketing. “We are committed to helping retailers make business grow,” says Noonan. “We have a designated team that looks into the space and assortment in a c-store and helps them figure out what brews will be best to drive traffic to their store.”

Last year alone, Summer Shandy helped grow the overall U.S. craft beer segment by more than 20%, Noonan says. While many c-stores rely on the top brands for profit, it’s important to look into the demand of local and national craft brews as well. C-stores are still behind larger grocery brands and other competitors when it comes to supplying craft brews, so knowing what your customers want can help get you in the game.

For c-stores open to expanding craft’s positioning, a key challenge is space. With premium beer dominant in the convenience channel, some operators are aiming to pry the lid off craft. One operator, Frank White, director of retail operations for Wheeling, W.Va.-based Tri-State Petroleum, is designating space specifically for the subcategory.

“In the last few months, I have dedicated two shelves in the cold vault to craft beer and flavored malts,” White says. “Craft was less than 1% in our store, but in June it reached 1% in its category, which was a large increase for us.”

Even if you have only one or two shelves of craft, building a section and rotating brands based on season and consumer preference can turn craft into a profitable subcategory.

White’s a great example. “We had a 136% unit increase in the craft-beer segment,” he says. “Some of our top sellers are Sam Adams, Redd’s Apple and Strawberry Ales, Blue Moon and Seneca IPA.”

Craft’s success should not be confused with any notion of turning off premium’s spigot. While he loves craft’s performance, White says he cannot ignore the volume and demand of domestic and popular products. 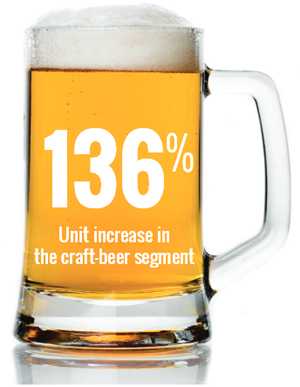 “Pay attention to what the customers want from your c-store and divide up your space based partially on that,” he says. “My two best sellers are 30-packs of Busch Light and Bud Light. Although I would love to grow more in craft beer, I can’t ignore the demand of these top- selling items.”

Another option for making use of space is advertising. Having promotional setups in the store or in the windows can help advertise your craft-beer selection and get consumers thinking about different varieties of beers.

Independent research from heat-mappers and consultants show c-store customers are rarely ones to meander. In the small box, they are in and out within 2 to 3 minutes and, overwhelmingly, they enter a store knowing what they want.

Noonan underscores the importance of diversity in c-store success with craft. “It’s important to have a variety of package sizes and choices,” he says. “If you are out of the 30-pack or the 12-pack of bottles they are looking for, they will remember that and may not come back again.”

A lot of consumers are trying new brews and like their go-to beers, but they also like to have a variety of new options to choose from. Because millennials make up a large part of the consumer segment in search of craft beers, catering to them can help boost sales. For example, Noonan suggests keeping a small shelf or cooler space open for single brews that sell well or local brews for people to try.

Growlers are the next big thing, and state laws are opening up sales of growlers in convenience stores.

C-stores in Arkansas are now allowed to sell beer produced out of state if it’s through a distributor. If it’s a local brewer, you can buy directly. Local brands and startup brewers are also allowed to put some kegs in c-stores to share their beer and allow consumers to taste new products.

Another addition to the state’s new liquor policy that went into effect July 1 is that any store with a retail permit can request an endorsement to begin selling reusable 32- and 64-ounce growler containers filled with freshly tapped beer.

Roadrunner Stores jumped at the chance to have growler stations. So far, Growlers-to-go is featured in two of nine of the company’s stores, with more stations to open in the fall. One of the first chains in Arkansas to sell growlers, Roadrunner stores have partnered with California-based The Growler Station to help them kick-start their stations.

“We sell the 32-ounce growlers for $3.99 a bottle and the 64-ounce bottles for $4.99 a bottle,” says director of merchandising Bobby Harper. “The pricing of the filled growler depends on the type of beer. For a 32-ounce growler, prices can range from $4.99 to $6.99, and you basically double the price for a 64-ounce growler.”

The growler-station equipment has a special nozzle that never touches the bottle and doesn’t let much oxygen in, allowing the growlers to last 30 to 60 days sealed.

While laws are quickly passing on the West Coast, Midwest states may be next in line for more growler laws to pass—especially being home to Grand Rapids, Mich., which is Beer City USA.

The overall beer category was flat—up just 0.3%—in terms of unit sales in convenience stores for the 52 weeks ending May 18, 2014, even as craft-beer sales grew a phenomenal 25.2%, according to data from Chicago-based IRI. The catch here, of course, is that all craft- beer sales added together sell fewer cases than Natural Ice (14.9 million) and less in dollar sales than Busch Light ($526.7 million).

*Percent change from a year ago

** In figuring craft-beer sales, IRI includes beer from domestic manufacturers that sell for more than $30 per case. The size of the manufacturer is also taken into account, although each brand is considered on a case-by-case basis with regards to how the consumer would view it.

▶ Establish craft beer as a destination. Signage to show where the craft- beer section is will help consumers find seasonal and craft brews. Bundle the craft brews rather than spreading them across the cold vault or on dry shelves.

▶ Prove you’re committed. Rotated selections of craft beer in the coolers will help consumers see your wider beer selection, even if it’s in a small space.

▶ Train your staff. Do your employees know what IPA stands for, or can they name three popular craft beers? Keep them posted on seasonal brews and what new brews will be in soon.

▶ Keep categories fresh. Maintaining a master schedule of beers and seasonal flavors will help in managing beer coolers and dry shelves. Looking ahead to the next season and keeping track of popular seasonal brews will help in planning for advertising and promotions.

▶ Always highlight something. Craft beer drinkers are explorers. They like change and want to try something new every month. Meet their challenge.

▶ Partner with vendors. Work with vendors and local brewers to find out what your customers are drinking at neighborhood taverns or purchasing at local markets. Remember not to fall too hard for promotional sales pitches, and listen for smart leads.

▶Stay in the loop. Following various craft-beer blogs and websites will help you stay in touch with laws, trends and demands. White also recommends using the app Untappd to expand your knowledge of beer, discover what your friends are drinking, read and post beer reviews, and discover new breweries.

Beer Sales Flat in C-Stores, Even As Imports, Crafts Blossom

How A-B Transformed the Beer Category in 2012