Dan Gilligan has been the face of the petroleum marketer to Congress for the past 17 years as president of the Petroleum Marketers Association of America (PMAA), Arlington, Va. 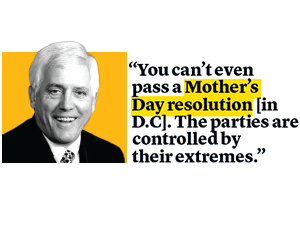 In that time, the fuel-marketing business has gone through incredible consolidation. When Gilligan started with PMAA, it had about 8,000 motor-fuel marketers in its membership database, many of whom were expanding into operating c-stores. Today, that number has slipped to about 3,000, and many marketers are seeking a return to their distributing roots.

CSP spoke with Gilligan as he passes the torch to Rob Underwood, PMAA’s former director of government relations, who takes over at a time of incredible change.

Q: What are your proudest accomplishments at PMAA?

A: One of the most fun things we did was pure luck. PMAA was having a “Day on the Hill” the day the Durbin amendment was on the Senate floor. We had members in town and met with dozens of Senate officers. The bill needed 60 votes to pass. We caught three or four senators going to vote “No” and told them, “This is what this is about.” We turned two or three key votes, and it passed 63 to 37. I’m convinced if we hadn’t been on the hill that day, it might not have passed.

Regulatory things can be more important than what we do on the legislative side. After the EPA finalized the aboveground-storage-tank rule [in 2001], we convinced them to revise it [to add clarity]. It was hugely important for our members to get that change. Now we are on the threshold of new [underground-storage-tank] rules. Over the past year, we have made some headway in convincing the EPA to make the rules more reasonable.

Q: What is one of your biggest regrets?

A: In 2001 and 2002, the industry and our members were concerned about the gasoline marketplace with hypermarketers, who were selling gas below cost as a loss leader, trying to drive traffic. They were selling it cheaper than our guys could buy it at the rack.

Sen. Tom Daschle from South Dakota wanted a national ethanol mandate put in place. We talked to his staff and said, “If you put a below-cost provision in there, PMAA will support it and lobby for it.” But we didn’t lay the proper groundwork with other industry groups. It was hugely controversial and very divisive. I regret that we moved too quickly, and it damaged our relationship with the other groups for a time. Finally, we pulled the plug on endorsing the ethanol mandate—it was just too controversial.

Q: How has the environment in Washington changed over that time?

A: There was a time when the basic rule was if Democrats were in charge, they got 60% of what they wanted, and Republicans got 40%. That doesn’t exist anymore. You can’t even pass a Mother’s Day resolution. The parties are controlled by their extremes. Compromise is hardly possible anymore.

You can find support for your bill; the problem is, you can’t get it over the finish line. There are a lot of things passing Congress that will get vetoed.

Q So how do you keep perspective?

A: With the interchange battle, I like to say if Jesse James were around, he wouldn’t rob banks—he would start one. At one time, as we were fighting for interchange limits on the hill, as many as 230 bank lobbyists were opposing us. Banks have endless supplies of money, all going to hire lawyers. It’s discouraging, but you just have to keep fighting.

Q: What’s the biggest issue Rob and PMAA will face in the future?

A: In the ’80s and early ’90s, guys in the fuel-marketing business were enthralled with getting into the grocery business. Now a lot of petroleum-oriented companies have decided to focus on distribution. PMAA will need to identify their needs.

Q: What are your plans for retirement?

A:I’m going to take a year off and see if I get bored. I took the PMAA job because I was bored to tears at my other job. [Since] the day I took over PMAA, there has not been a day of boredom.