Market, location, facilities, operations, merchandising, pricing and brand: These seven elements determine fuel retail success. They also are the basis of the 7E Score, Kalibrate’s method of evaluating fuel retailers’ strengths and weaknesses based on an objective assessment of their sites and network. 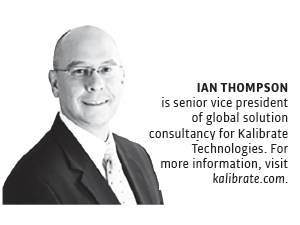 The 7E Score provides a benchmark and road map for continuous improvement. Also important is market efficiency, a calculation that reveals how effective a fuel retailer is in its market. This framework can help fuel retailers improve their performance and maintain or grow market share.

For example, one Kalibrate client is a family-owned retailer that owns 50 sites in North America. Its locations have performed acceptably. But about seven years ago, after the family’s second generation took charge, management felt the stores and organization were capable of more. The company’s entrepreneurial CEO asked Kalibrate to objectively assess the whole company—people, processes and systems—with a focus on each retail location.

About this time, a well-known, exceptional national brand entered several of the retailer’s markets. Faced with competition from a large chain, the CEO knew improvement was now a necessity.

A Plan for Success

To create a performance benchmark, Kalibrate calculated the retailer’s 7E Score, which also served as a starting point for new strategies and tactics. The score revealed that the retailer was a typical third-quartile operator, meaning it was performing in the lower half of Kalibrate’s clients. Its low scores in each area were combined with a lower-than-average market efficiency rating. This was cause for concern—and also an opportunity.

Kalibrate identified three key areas for immediate focus—market, location and pricing—and, with the retailer, planned activities to address these capabilities.

First, the team mapped the markets where the client was thriving and those where it was simply surviving. They identified markets favorable for expansion and those to avoid. This mapping also indicated a potential for network rationalization and reinvestment.

For example, before Kalibrate and the client began working together, the client had some sites that were too close together. While this created a sense of brand awareness with consumers, it also brought about demand cannibalization. The client was essentially stealing customers from its own sites.

Second, within the markets where Kalibrate expected the client to prosper, it pinpointed very precise locations of unfulfilled demand—locations where the client had the greatest opportunity to steal customers from the competition without reintroducing demand cannibalization. There is a fine line between improving brand awareness through market presence and becoming your own strongest competitor. Kalibrate and the retailer were able to get this balance right.

Third, the team agreed on a pricing strategy and site-level tactics to help meet the retailer’s strategic imperatives. Kalibrate aligned these tactics with the market and the client’s brand messaging to provide compelling value to existing customers and build brand loyalty with new ones. The client had been working under the misconception that price had to remain low to battle competitive new entrants into the marketplace. But the improvements the client had made in the other six elements earned it the right to price at an appropriately premium level. It had created enough difference between its own sites and competing locations that its customers were willing to pay a bit extra for fuel.

The retailer implemented Kalibrate’s recommendations, and the results were significant. The overall 7E Score improved, increasing the retailer’s market efficiency by 22% over seven years. During this time, the retailer succeeded against continuous waves of formidable competition as extremely capable new fuel retailers entered the market.

Over the same period, the client’s absolute fuel-volume performance increased by more than 35%. This contrasts with competitors who experienced falling market efficiency and fewer gallons sold. Also, c-store sales grew by 10% in that seven-year period. The net result was a more profitable, efficient and sustainable business.

And the journey goes on. Kalibrate continues to support the retailer as it stays strategically nimble in a fast-changing marketplace. This retailer feels prepared to deal with whatever challenges stand in the way of maximizing ROI across its fuel network.

7E Score: Before and After

Kalibrate worked with a 50-store retailer to boost its performance in seven crucial measures that together determine its fuel retail success.