C-store foodservice consultant and former 7-Eleven and Circle K executive Joe Chiovera recently took national TV by storm. He and his sons, Giuseppe and Xavier, competed on the season premiere of Guy Fieri’s “Guy’s Grocery Games,” which aired on the Food Network. 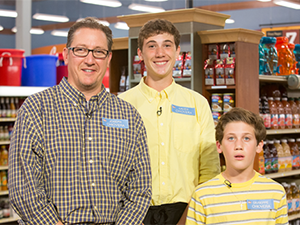 The result? A win, of course! They defeated three other families to advance to the fınal challenge, where they took home a $14,000 cash prize.

The episode pitted four teams of three family members against each other in challenges that had them shopping a grocery store and cooking a thematic dish for a panel of judges.

“What’s amazing about this dish is that a hot dog is just messy, but there’s this weird sense of refinement. … There’s a beautiful freshness,” said Richard Blais, celebrity chef and judge of Team Chiovera’s hot-dog dish.

Chiovera, who operates his consultancy, XS Foodservice Solutions, from his headquarters in Dallas, expressed a few sentiments on his big Food Network debut.

How did this come to be?

When I got let go from Circle K, I found myself seeing my kids off to school every day, seeing them when they came home and eating dinner every night, and we got into the habit of watching a ball game on TV or the Food Network while we were in the kitchen sitting down. My youngest son said to me, “Dad, you’d be really good on ‘Chopped.’ ” I said, “I don’t know—that’s a different type of chef. I know I can cook anything they give me, but there are certain ingredients I’ve never even worked with before that these guys are challenged with.”

You must cook quite a lot at home.

I’m kind of a freak. When I know we have a holiday or we’re doing some entertaining, I’ll go … spend 3, 4 hours shopping all over town for the right stuff. I’m a supermarket junkie. So unbeknownst to me, my oldest boy, Xavier, wrote a letter [to the Food Network]. It was really heartwarming, what he wrote, and I got contacted. That’s how it all started.

At first I thought I was going to be the one competing, and then they asked me whether or not I’d cook with my kids. I said, “We eat more together than we cook together, but yeah.” … The rest is history.

Any one challenge that threw you off?

The one challenge where the only thing that we were able to utilize were ingredients starting with the letter “R.” We were trying to make a sauce for the ribeye and I was looking for sour cream, and my son said, “Dad there’s no ‘R’ [at the beginning of] ‘sour cream’; let’s use ricotta cheese instead.” We had horseradish root, raw sauerkraut and rice vinegar, and we used the juice from the sauerkraut and the rice vinegar to make the sauce. It turned out really well—the horseradish really popped on the ricotta cheese.

Were there other big obstacles?

The other hardest challenge was that I wasn’t allowed to talk for 15 minutes [during a “Sunday supper” challenge], and I couldn’t do anything but ... use a white board. I was jumping up and down and slamming my hands on the table. That was probably equally as tough as the ingredients. But the kids took over the kitchen and all I could do was guide them.

What did your kids take away from the experience?

The boys feel really con dent now about being in the kitchen, and they just love the fact that we did it together. It’s about the kids, and [as a team], we incorporated them into the actual workflow—that’s where a couple of the families got a little dinged. From the very start, I was including the kids, and I think that’s what got us a few extra points.

At the end of the show, I said, “I am so overwhelmed with pride right now. I have the best boys in the world.”