When you get the chance to move back home, and it just happens to coincide with a smashing business opportunity, you take it, right? Jared Scheeler did. 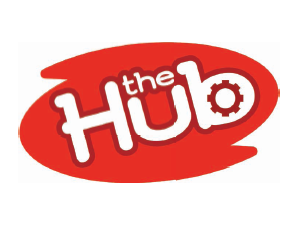 Scheeler, convenience-store entrepreneur and managing director of The Hub Convenience Stores, Dickinson, N.D., gave CSP a glimpse of the plans behind his new c-store venture. Scheduled for its grand opening in October, The Hub promises to be a destination food stop for the booming fracking town it will call home.

CSP: When was your “a-ha” moment—the moment you had the idea to move to the Dakotas and start a c-store chain?

Jared Scheeler: I spent 15 years working for a chain in the Twin Cities (Minneapolis and St. Paul, Minn.) called Bobby & Steve’s Auto World, which is a convenience retailer that specializes in automotive repair. I began there as a freshman in college, shortly after the company started, and I was fortunate enough to have a big role in the growth and development of that company. I learned an immense amount about business leadership from the company founders while mostly being self-taught on the intricacies of convenience retailing.

I hold Bobby & Steve’s Auto World in the highest esteem and many of my closest friends come from that company. That being said, I have strong entrepreneurial DNA, and over time I figured that my penchant for growth, continuous improvement and being an elite retailer could best be realized if I branched out on my own.

What was the motivation behind that “a-ha” moment? 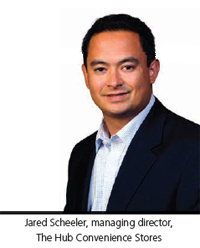 There were many factors that supported a move from trendy Minneapolis to sparsely populated North Dakota. First and foremost, with my children getting older, having a close connection with our extended family became very important. My wife, DeAnn, and I grew up in Dickinson and have many close relatives still living there. Finally—and I’d be remiss for not mentioning—the unique business opportunities in the thriving Bakken Oil Play of western North Dakota. Believe it or not, North Dakota is a happening place right now.

The convenience retailers in the area are well established, mostly independently owned, and fuel branded by a major oil company or refiner. There are some highly respected chains in the area such as Kum & Go and Holiday Stationstores. But moreover, regardless of store size and offerings, this region is extremely loyal. All of the strong community relationships that have been built over the past few decades by the existing businesses will be very challenging to overcome. Developing that community relationship takes time, though it’s something that I’m fully committed to in both words and action.

When you were planning for this store, what did you have in mind for foodservice? I’ve heard the term “feeding the frackers” tossed around. Were they foremost in your mind during planning?

Aside from a strong desire to deliver world-class service, The Hub’s success or failure will be derived from our ability to provide a compelling foodservice offering. This entire region is not accustomed to having quality food in a convenience store. Our intention is to begin to change that culture and expectation in the area. A large part of our client base will be the thousands of oil and gas industry workers in the area. Much of our foodservice program was developed with that core customer in mind. It’s a demographic that loves convenience stores and has a very big average ticket each day.

Though catering to that customer doesn’t fully align with the healthier direction of foodservice in our industry, The Hub will also be offering a wide selection of fresh-made, healthy food options. I believe that Brad Call, the current NACS Chairman, said it best in his speech at last year’s NACS Show: “Your responsibility and my responsibility is to provide healthy choice options. But it’s not our responsibility to tell customers what they should and shouldn’t eat.” We’ll have healthy foods in our stores, but our focus will always remain on what the consumer demands, whatever that may be.

Specifically, our convenience store food program will feature the widest variety of dispensed beverages in the area, including coffee, fountain beverages and tea, frozen beverages, and more. Moreover, we have designed a large prep kitchen to make most food items fresh on site every single day. From fresh bakery to sandwiches and wraps to take home meals, there will be a plethora of food options at The Hub. We’re most excited about some unique food items that we hope to become signature to The Hub.

In addition to what you mentioned above, what are you planning specifically for foodservice? Will it be mostly franchise outfits? Or will you do anything proprietary?

We have aligned ourselves with some branded food programs. Our convenience store will feature Godfather’s Pizza, and we believe that program is a perfect fit for western North Dakota. We also have designated a lease space for a restaurant operation. After much deliberation, we decided that The Hub would own and operate a franchise program. We focused on the fast-casual market, which happens to be untapped in this area. In October, we will be opening a Schlotzsky’s Deli and Cinnabon Express with a direct connection to The Hub Convenience Store.

How did you make that decision?

The decision to utilize a mix of branded and proprietary food offerings was relatively easy. As a startup company in a labor-tapped market, we need as much support as possible from supplier programs. Choosing branded programs will provide us with top-notch training, standard operational procedures, and ongoing support. From experience and by studying the industry, the best convenience food operators conduct most of their food operations on location in the store. This allows for freshness, consistency and the ability to compete with QSRs. Mixing that model with the support of a trend-setting convenience food service supplier in Farner-Bocken Co., we are very confident in the products and programs that we’ll be offering.

How close will your first store be to actual fracking operations? Do you expect your store to be a destination for breakfast, lunch and dinner?

There are essentially two major hubs (no pun intended) for oil activity in western North Dakota: Williston and Dickinson. There are also some smaller centers of activity, but the bulk of action is surrounding Williston and Dickinson, as they were the most populous towns in the area prior to the recent oil boom. Dickinson sits on the Southern tip of the Bakken Formation, which stretches in to eastern Montana and Canada. There are oil rigs (and, subsequently, fracking activity) within city limits, as well as scattered throughout the immediate region.

Because of the natural traffic flows, we believe that the morning and evening drive times will make The Hub a prime breakfast and dinner stop. However, the Schlotzsky’s Deli is the perfect complement to the oil well rush because it provides a unique lunch option to Dickinson residents during the day.

Have you heard any buzz about your store among locals? What’s the reception been like?

The reception of our business concept from area residents and businesses has been tremendous. Schlotzsky’s Deli will be the first fast-casual food option in Dickinson. And who doesn’t like Cinnabon? Godfather’s Pizza had a franchise here many years ago that closed because of poor operations. The community has been clamoring for it to return for more than 20 years. Even though working to generate a buzz is exciting, I more so look forward to delivering on our brand promises once we are open to show the community a great business that they deserve.

What sort of buildup are you doing ahead of launch day in October?

Building strong relationships is one of the core business values at The Hub, and this includes relationships with local businesses, residents, suppliers and the community officials. Right now my efforts involve forging those relationships, reacquainting with old friends and building a perception of quality and value around The Hub. As we get closer to opening we’ll launch a full-scale marketing campaign that focuses on all of our profit centers. This will lead up to a grand opening celebration of Schlotzsky’s Deli and Cinnabon, followed by The Hub’s dedicated grand opening.

Right now it’s difficult to see beyond the next 10 months, as the first ground-up project of a new company provides many challenges. But ideally I’d like to see development of truckstop and convenience-store concepts within three years and 10 locations within the region in 10 years. We’ve got some work to do before we get to that point.