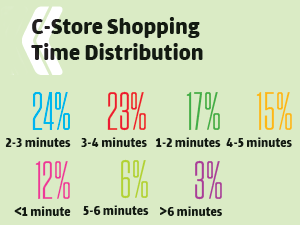 Each retailer had a store or multiple stores outfitted with ceiling-mounted cam eras to follow customers’ journeys through the aisles during millions of shopping trips. The retailers also shared point-of-sale (POS) data with VideoMining Corp., State College, Pa., which, with the help of proprietary software, correlated the store traffic with purchase behavior. Exit interviews with customers provided additional insight.

This past year’s research, which VideoMining shared exclusively with CSP, shows retailers are truly upping their game. As a group, they saw weekly per-store revenue jump 10%, a 9% increase in average basket size and an 8% leap in average number of units sold.

Some of the improvements require a little perspective. For example, the percentage of fuel customers who made an in-store purchase rose 1 percentage point—but it still sits below 30%. The total time spent in the c-store rose 6%—although it still gives retailers less than 3 minutes to trigger a purchase.

Many of the retailers have participated in the CSI program for multiple years. Gwen Forman, senior vice president of marketing for Cumberland Farms, Framingham, Mass., which has 540 locations in eight northeastern states, says the research helps answer very important but complex questions.

“The pump-to-store conversion rate—I can’t get that data anywhere else,” says Forman. “We don’t have a loyalty card we use at the pump and inside where you link the transaction. That’s always been a matter of curiosity for us: What percentage of customers pump and leave vs. come inside?”

According to VideoMining’s 2014 research, 45 out of 100 fuel customers pay at the pump and leave.

“It’s a great way to learn behavioral data that is not so easy to find or identify,” says Maria Correa, customer research analyst for Maverik Inc., North Salt Lake, Utah, which has more than 260 stores in 10 western states. “This is a great way to identify it, and to get store and traffic conversion rates.” The percentage of store visitors who made a purchase rose 1 percentage point to reach 60% in the 2014 study.

What follows are highlights of the latest VideoMining CSI program, which took place across eight weeks in August and September 2014. The results reveal nice strides, along with plenty more opportunities to leverage.

Mapping Out the Gas Visit

The sixth annual C-Store Shopper Insights (CSI) program tracked an increase in time customers spent in the store and shopping time, while checkout time held steady. That said, retailers and suppliers still have a remarkably narrow window—less than 3 minutes—in which to trigger a purchase once customers are in the store.

“Our in-store shopping time is higher than average for the panel. I like to think we are getting more people to purchase foodservice items, which would generate a little bit of a longer trip, because [these items] have to be prepared.” —Gwen Forman, Cumberland Farms

“We do see a similar trend [toward increased total store shopping time]. But we also have a faster checkout time. So that makes the total shopping time a little less than the panel. But that’s something we expected, because our operations team works hard to have it that way.” —Maria Correa, Maverik 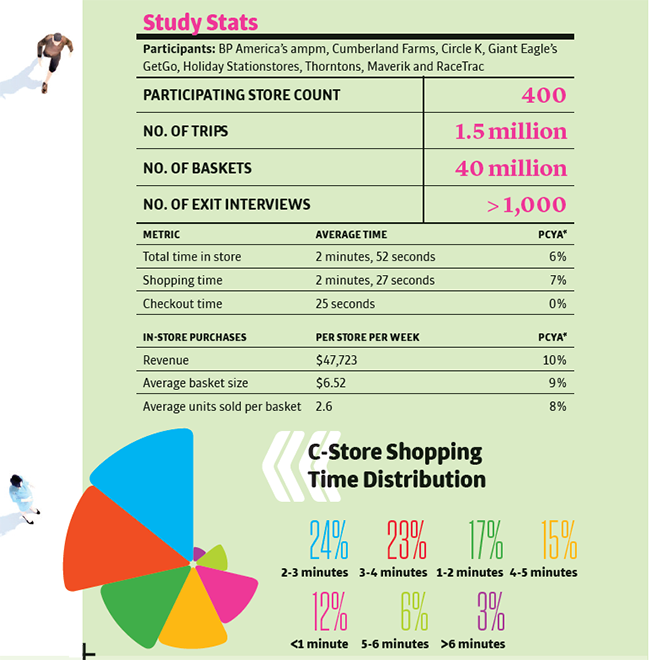 Source: VideoMining Corp. * Percent change from a year ago

C-stores have improved their ability to draw shoppers inside the store and encourage them to make a purchase,  according to results from the latest VideoMining CSI program. Of the more than 17,000 customers per store per week who drove onto the c-store lot, 71% decided to enter the store. This marks a 5% increase from the 2014 study.

Meanwhile, of the more than 12,000 customers per store per week who entered the store, 60% made an in-store purchase, which is up 1% from the previous year.

About 70% of shoppers visit c-stores more than twice per week, with male, millennial, low-income and Hispanic customers indexing higher than the average.

Forman says Cumberland Farms’ ratio of traffic to buyers is not as high as that of some of the other chains that participate in the study, although she is not sure why: “Are they just coming in to use the restrooms, since we’ve been remodeling them, and leaving? Do we get more groups? Do people just like to hang out here?” 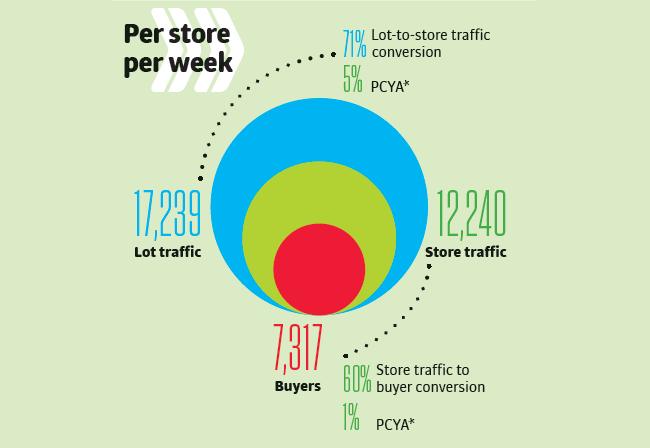 * Percent change from a year ago

“When you think about 70% of purchases being planned (according to VideoMining research), who are all of those other people? What are they doing lingering around our stores? Is it as simple as a group of landscapers coming in and one  person is buying coffee for everybody? If it is real, potential customers and not just mothers with kids or designated buyers for groups, there’s a lot of leverage there.” —Gwen Forman, Cumberland Farms

“The lunch occasion is a growth opportunity where buyer conversion dips between the hours of 11 a.m. and 2 p.m. Lean into creating lunch-themed merchandising and promote with complementary products. Also, get your assortment right on key categories by having the right mix of core and new SKUs, and ensuring products are in stock.” —Kelly Fulford, General Mills

CONTINUED: Mapping Out the Gas Visit

Mapping Out the Gas Visit

More than seven of every 10 gas customers (71%) left without purchasing an in-store product. This is a 1-percentage-point improvement over 2013. The percentage represents the change from the previous year’s program.

“In general, pump-to-store conversion is a big one for us ... particularly those who just go inside to pay, without buying anything else. As an industry, how do we leverage that customer who is already standing there? There’s a huge amount of financial leverage in improving that percent by just one or two points, which it did for us this year. We’ve really been working on that and using the right messaging on pumptoppers. We also use 10-inch advertising screens at some stores. That has been part of it—just getting the right messages.” —Gwen Forman, Cumberland Farms

“Overdeliver on snacks, beverages and freshly made meals to get shoppers into the store. It’s also important to promote anchor (destination) categories by creating more meaningful messaging at the pump.” —Kelly Fulford, General Mills 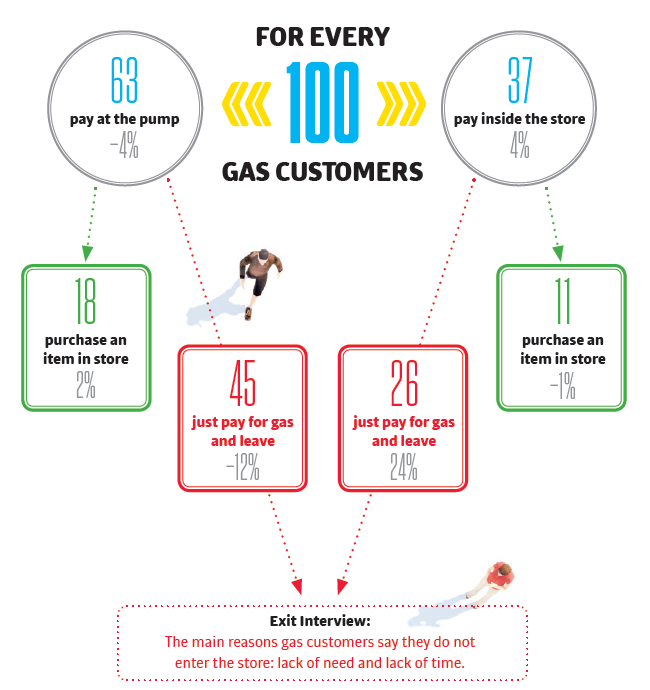 Maverik, which has a longer history in foodservice with a program that includes flatbread sandwiches, cheeseburgers, burritos and breakfast sandwiches, is ready to tackle this tricky day-part. “We have a big opportunity with dinnertime.

That’s something we’re going to work on: finding new meals and opportunities appealing to that occasion,” says Correa. “[Foodservice is] really one of the main reasons customers visit us, so why not take advantage of that opportunity if no one else is doing it?”

In exit interviews with c-store shoppers, VideoMining found that most would consider buying prepared food from c-stores. The most likely day-parts: snacks and lunch.

Question: For which meals would you consider purchasing prepared food from a convenience store?

Over eight weeks in August and September 2014, VideoMining Corp. conducted its sixth C-Store Shopper Insights Program, a study that quantifies and analyzes c-store shopper behavior and tracks the in-store path to purchase.

The 2014 study, conducted in collaboration with several CPG vendors, included eight of the c-store channel’s largest chains, representing more than 400 participating stores across the country, and encapsulated approximately 1.5 million shopping trips. A certain percentage of stores were outfitted with ceiling-mounted video sensors to track customers’ movement in the stores, while proprietary video-analysis software processed millions of hours of c-store shopping trips. The data was then cross-referenced with POS data to reveal insights about the average c-store shopping trip by day-part, category and location within the store. VideoMining also conducted exit interviews with more than 1,000 customers.

For more information, or to participate in future research, contact Priya Baboo at pbaboo@videomining.com or visit www.videomining.com.

All research and sources provided by VideoMining Corp.

Fueling Sales Inside and Out