The weekly ­fill-up is a dirty, often unpleasant task. 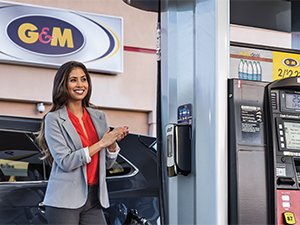 Beyond dealing with gasoline and diesel fumes and possible bad weather, customers must touch a fuel dispenser that thousands of other motorists have handled. According to a 2011 study by Kimberly-Clark Professional, 71% of gas-pump handles had high levels of contamination. This is a greater percentage than that of escalator rails, ATM buttons or vending machine buttons.

It’s debatable whether a gas pump has ever sickened anyone from touch alone. But it’s undeniable there’s a perception problem, especially at a time when c-store retailers are attempting to grow their foodservice business. Enter forecourt offers that aim to elevate—and even sanitize—the fueling experience.

U-Glove Inc., Miramar, Fla., presents what CEO Antonio Lyon calls a “proactive” approach to fueling cleanliness with its recyclable polyethylene gloves that customers can put on before touching the dispenser.

Lyon was inspired to start the business after noticing that gas stations in other countries—Spain and Japan, for example—have o­ffered customers disposable gloves for years.

“How come this developed country, which is close to 90% self-service [fueling], doesn’t have this basic service?” says Lyon. “When you think about a c-store and the products sold, 100% of it is held in your hand. We are elevating the hygiene standards at the gas station.”

The U-Glove program includes one dispenser per fueling position, each holding 250 one-size-fits-all gloves. The plastic dispenser is available in one color—white—to avoid interfering with the store or fuel’s branding. Each dispenser typically goes through one 250-glove box per month, although high-volume sites might churn through 500 gloves per dispenser. It typically takes customers four to six visits before they notice the gloves, says Lyon, but once they begin using them, they quickly get into the habit.

Pricing depends on the number of stores and pumps. For stores with fewer than eight fueling positions, the retailer pays a monthly $30 flat fee. Stores with eight to 12 dispensers pay $40 per month, while those with 12 or more dispensers pay $60 per month. Retailers can also display their own promotional advertising on the dispenser for no additional cost.

In 2016, U-Glove forged a partnership with AllOver Media, which coordinates advertising at c-stores, to oversee additional advertising opportunities on the dispensers.

“Finding the little things that set us apart can sometimes make a big difference.”

U-Glove began rolling out in Florida in 2014 and today has signed on more than 1,000 stores. At the beginning of 2016, CITGO Petroleum Corp. became one of the most recent retailers to test the program.

Hand sanitizer—ubiquitous in hospitals, doctors’ offices and public bathrooms—is finding a place at the pump. G&M Oil Co. Inc., Huntington Beach, Calif., installed hand-sanitizer dispensers at 12 of its more than 150 sites in fall 2015. It began as part of a test of the Purell at the Pump program from Gojo Industries Inc.

According to Gabi Yanuzzi, category and merchandising manager for G&M, the o­ffer was not in response to customer concerns about dirty pumps, but rather an extension of the retailer’s larger aesthetic e­fforts. G&M is one of the largest Chevron ExtraMile franchisees in the country, and it also has its own G&M Food Mart brand at 54 sites.

“It seemed to nicely complement what we try to achieve at G&M, which is doing things that enhance the customer experience,” says Yanuzzi. These e­ orts have included upgraded soaps and hand towels in the bathroom, LED lighting in the store, a focus on cleanliness and a growing foodservice o­ffer.

“Finding the little things that can set us apart can sometimes make a big di­fference, and it resonates with the customers,” says Yanuzzi.

At G&M, there are about six to eight Purell dispensers per site, most of them placed near nozzles for maximum visibility. G&M can also display advertising on the dispensers. In this case, an insert promotes the retailer’s mobile app.

“The key is placement,” says Yanuzzi, pointing out that some surfaces—brick or stone pillars, for example—can be challenging places for attaching the dispenser. Also, employees must stay on top of refilling the hand sanitizer, making it a part of their regular maintenance rounds. G&M goes through one three-count case of 1,200-mL packages of Purell every few weeks. The cost of the program runs about $1 per store per week.

“It’s an expense, but if we get a repeat customer from it, it’s well worth it,” says Yanuzzi. In customer intercepts at the G&M sites, Gojo found that 59% of customers noticed Purell at the Pump, and 58% of them reported using it.