"Move the crowd in front of the DJ!” Lonnie McQuirter yelled over blasting music. He was laying down, his head hanging over the rooftop of his store, simultaneously helping a band set up while posing for photos for us. His directives were aimed at one of his many employees bustling around the forecourt, where a DJ was plugging in under the shade of the canopy. 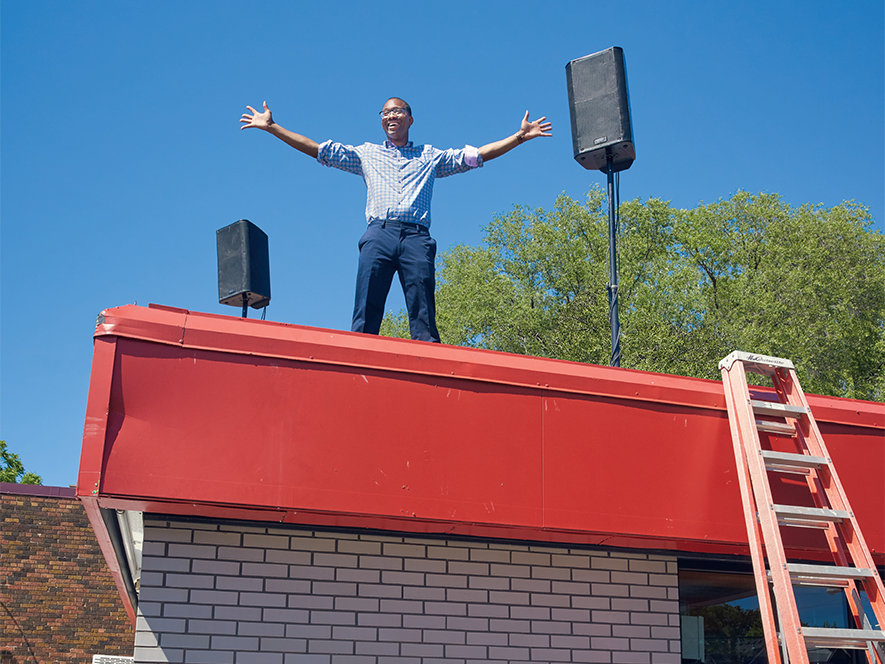 I know it’s cliche, but nothing is more inspiring, in this job, than a day inside a c-store. It reminds me why I do what I do—or rather, whom I do it for: you.

I got to do that on a toasty Sunday in June at Lonnie’s 36 Lyn Refuel Station in South Minneapolis. We asked Lonnie if we could do the photo shoot at his store for our inaugural Indie Influencers list (p. 30), and he recommended we come during Open Streets. He’d have a food truck on the forecourt and the aforementioned band on the roof.

Open Streets is a festival that travels around Minneapolis during the summer. The city shuts down car traffic on a busy street, making way for bikers, walkers and strollers. The sidewalks crowd with companies sampling their products and high schoolers raising money for new equipment. Lonnie, owner of 36 Lyn, which flies the BP flag, is not only a participant but also a sponsor of Open Streets. His store sits on a busy intersection, making for a great spot for festivalgoers to take in a band on Lonnie’s shutdown forecourt.

A c-store retailer shutting down its pumps for the day for a party that celebrates taking the streets back from cars? Sounds weird, but it’s one of Lonnie’s many ways to win over the not-in-my-backyard (NIMBY) crowd, thank his avid fans—er, customers—and engage his employees by letting them have some fun with their neighbors. That right there? That’s the modern-day mom-and-pop hustle.

Spotlighting just 10 independent retailers for our first Indie Influencers list was, well, excruciating. We are well aware of the thousands of phenomenal operators out there that help drive their businesses, communities and industry forward. But the 10 retailers the editors of CSP chose to be our inaugural class represent four key areas: political heroes, community hubs, iconic indies and foodservice leaders. Our choices hit on at least one of these critical roles, but they also do something else: They evolve the idea of a mom-and-pop business to the 21st century.

For some, that means going old school, with pristine white jumpsuits for station attendants. For others, it means replicating the third-party delivery trend, serving Guy Fieri-sanctioned barbecue or making better-for-you a lucrative business venture once and for all.

Another critical theme resonated among the editors during this project: how hard it is. How hard it is for indie operators to get the attention of legislators, suppliers and even financial institutions when they’re ready to grow. And yet they do it, with a steadfastness and passion that, well, makes you want to celebrate them in a magazine feature.

The Coolest Place Ever

Visit 36 Lyn for more than the two minutes it usually takes to get in and out of a c-store and you get the pleasure of watching Lonnie and his entire crew hold court over their corner. In less than an hour’s time, Otis, a neighborhood dog, bounded in for some treats and water. A dad and his baby sheepishly asked for $50 worth of quarters and ones for their rummage sale. (I think he brought the baby so it was harder to say no; it worked.) Lonnie picked up a little kid in a Spider-Man bike helmet to give him a hearty hug.

An elderly Vietnamese woman brought in lunch on a paper plate covered in plastic wrap: sticky rice and roasted pork. “This is the coolest place ever,” one customer declared to no one in particular (well, probably me and the conspicuous camera crew).

Back on the roof, Lonnie encouraged his employees and friends to get people on the forecourt/dance floor. His crew power-washed the concrete, stomped down fresh asphalt and debated with some police officers over the placement of the food truck. He posed for us for more than eight hours. He could have sat back and enjoyed the party, but no way. He wanted to make sure the DJ was having a good time by  ensuring a crowd.

He wanted passers-by to be drawn into the action, to have a good time on his watch. If anyone feels a modicum of NIMBY sentiment about 36 Lyn, it’s because they haven’t walked in the front door. So Lonnie’s busting those doors open, bringing hospitality right to their feet.