While operators and consumers desire faster and easier transactions at the pump, Burke of Gilbarco cautions patience, saying the industry is still in its relative infancy.

More retailers are using branded apps to drive loyalty, he says. “And successful pilots have included a benefit to the consumer for use of the application,” such as cents off per gallon and in-store enticements.

However, the percentage of actual purchasing of products using mobile devices remains small, Taylor says. “According to most reports, over 60% of smartphone users do at least some banking and online shopping on their device each year, some habitually and some sporadically,” he says. “What is interesting is that despite the majority of bank customers performing banking functions on mobile, only a small segment has actually used the phone to buy at a brick-and-mortar location using a bank-supported app.

“Why this disconnect exists is an interesting question that needs to be answered,” he continues. “I believe it circles back to convenience, or the lack thereof.”

“There is electronic transaction engagement with the customer,” Bakker says. “It is most relevant based on their transaction history, and it offers instant gratification.” 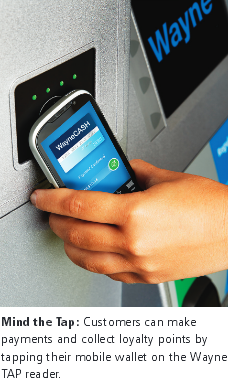 There are a few big challenges facing mobile-friendly dispenser technology over the next five years.

One is the issue of apps, and whether a retailer should customize one. “Retailers looking to deploy mobile applications should consider whether they should leverage a broader network of users or their own branded mobile network,” Burke says.

Another challenge, he says, is overcoming safety concerns about the use of mobile phones at the fuel dispenser. “While a variety of resources have published research stating there is no risk, there is still some consumer concern around their use,” Burke says.

Taylor sees the main challenge with mobile-friendly dispenser technology as determining “which technology” should be supported by the retailer. “My answer is: You have to support all of them,” Taylor says. “This is why Conexxus is so focused on mobile commerce—not to design the platforms, but to ensure vendors and retailers are capable of readily plugging the innovations into their store systems with minimal effort.”

When considering investing in mobile- friendly dispenser technology, retailers need to consider bandwidth to the island—because that is an infrastructural issue that lasts for years.

“In Israel, some stations have fiber-optic cables going to the island,” Taylor says. “We need to think how we will deliver gigabit service to each service point.”

Consider incorporating open-architecture pump electronics, Taylor suggests. “I don’t see the pump getting ‘smarter,’ but nothing provides the flexibility of integration down the line better than an open platform with support for standardized connectivity. And don’t forget that PCI requires ‘managed endpoints,’ which means a higher-end capability in the pump.”

“Pumps have a long capital depreciation cycle, and not all pumps are ready for new mobile integration,” Bakker says. “Also, there can be costly upgrades.”

Bakker also stresses that mobile consumer marketing makes sense only if it is based on the consumer’s transaction history to ensure relevance. “Anything non-transaction is just more spam and clutter that will be tuned out by the smart mobile users,” he says.

The future of mobile-friendly dispenser technology is, quite frankly, unknown.

“This is where Visa and MasterCard don’t get it,” he continues. “They should be looking for ways to put the payment terminal in the hands of consumers instead of the retailer.”

This solves a few expensive problems, Taylor says. It segregates the availability of cardholder data to billions of devices instead of retailer choke points where it can get stolen. And because it is software-based (with a few well-defined connection methods), it can be upgraded and provisioned without the time and expense of terminal upgrades and new cards.

“It’s the same value proposition we saw in automation in the late 1980s and ’90s— dump paper for digits,” Taylor says. “When I first looked at Internet at the island, we believed that the dispenser would be the epicenter—because wireless was too rare, inefficient and inexpensive. We also underestimated the power growth curve of the handsets, which has pretty much blown away everyone’s expectations.

“Now it is the handset and consumer who are the epicenter going forward, which means our industry will need to be far more reactive than in the past, where we created everything to present to the consumer.”

Of course, as mobile technologies continue to mature, they will be fully integrated into the consumer experience at the pump. “The consumer’s mobile device will enhance the fueling experience,” Burke says. “This will be accomplished by making it easier to pay and linking relevant content shown on the dispenser color screen to the customer’s smartphone.”

▶ Consider the bandwidth of each of your dispenser islands.

▶ Determine the expense of incorporating open-architecture pump electronics, which will allow you to make additional changes to your dispensers as technology changes in the future.

▶ Study your consumer demographics and buying patterns, as well as potential buying behavior to make sure that your customers are mobile users who will embrace mobile-friendly dispenser marketing and payment options.