It’s 1958 and you’ve just pulled up to your neighborhood gas station. A young man wearing a clean uniform and crisp tie ventures out from the small service station to greet you. While filling up your tank, he washes your windows and checks your car’s fluids to see if anything needs topping off . You pay him in cash and wave as you drive away. 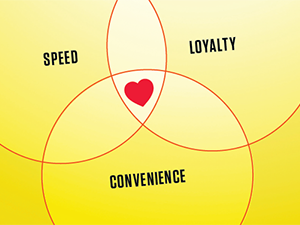 Fast forward to 2015. A young woman pulls into a gas station. Wallet in hand, she swipes her credit or debit card, fumbles through her purse or key chain for her loyalty card, swipes that, and then begins to fill her tank. She briefly watches the morning news on the media screen above the gas dispenser. Inside the c-store, employees scan the forecourt through closed-circuit TVs, never having to venture outside. Upon filling her tank, the woman replaces the nozzle and drives away, never entering the store.

If the first scenario feels archaic, it won’t be long until the second does too.

Mobile-pay apps are gradually changing the way the petroleum industry does business, accelerating the transaction process while opening up new methods of communication between the retailer and its customers. Three recent rollouts from MasterCard, ExxonMobil and Chevron reflect this move toward speed and convenience—all with loyalty in mind.

The continued growth of fuel loyalty programs have been a boon for c-store retailers, but it also has caused customers to have to insert two cards—one for loyalty and one for payment.

“Through mobile, this can be done with one click,” says Kurt Weiss, senior vice president of mobile transaction services for MasterCard, Purchase, N.Y. “C-store owners are very interested in the mobile-pay technology, as the ‘offers’ component of the service opens up a new communications channel with consumers, which can help drive sales into the higher-margin c-store. So it is a win-win—a better consumer experience and higher margin for the station operator.”

MasterCard supports and enables all types of digital payments, but it also saw a bigger opportunity in the fuel industry. So it has taken a software-based cloud approach to mobile payments, which will allow for scalability without the need for additional hardware and costs.

In October, MasterCard announced a global partnership with mobile commerce provider P97 to make it easier for consumers to purchase and save on gasoline and convenience-store items through their mobile phone. Called the MasterCard Fuel solution, it will use P97’s PetroZone mobile commerce platform to integrate to an existing gas-station infrastructure.

The MasterCard Fuel solution will enable fuel companies to develop innovative apps for consumers to make simple mobile payments at the pump and inside the store, and receive personalized offers for in-store purchases. It will also be backed by the company’s security and other services such as tokenization and ongoing R&D efforts in the payments/loyalty space.

The c-store market is of particular importance to MasterCard’s mobile efforts, says Weiss: “We could not ignore one of the largest verticals in the United States.”

Historically speaking, Exxon Mobil Corp. was the first major industry player to launch a mobile pay-at-the-pump solution. In 1996, the Irving, Texas-based company began development of what would become the Speedpass wireless-transaction system. The idea was centered on convenience, designed to get customers into and out of the forecourt as fast as possible. Speedpass+, the next generation of Speedpass, takes it to a new level.

According to ExxonMobil spokesperson Christian Flathman, the value of Speedpass+ isn’t only in the exclusivity of the

technology but also in the relationships with users. It builds upon its many compelling offers already in place, including linking to ExxonMobil’s Smart Card and Personal Card credit cards.

“We recognize that smartphones have become an integral part of our lives, and the Speedpass+ app gives Exxon and Mobil consumers their first opportunity to pay for fuel from their phones,” Flathman says. “The ability to pay via a smartphone is becoming a key decision factor in selecting a brand, and Speedpass+ was the first app of its kind offered by a national retail fuels brand.”

The app works with ExxonMobil consumer credit cards (Smart Card or Personal Card) and Automatic Clearing House (ACH), which allow consumers to link their checking account to the Speedpass+ app as a form of payment. It is compliant with banking security standards and includes built-in authentication factors and data security.

After a successful 2013 pilot program in Nashville, Tenn., ExxonMobil launched the app at participating Exxon- and Mobil-branded stations in Philadelphia; Charlottesville, Va.; Salt Lake City; and Houston. With more than 10,000 ExxonMobil stores in the United States, “we are excited about the potential and future for both consumers and our branded station owner/operators,” Flathman says.

Given that an estimated 80% of Chevron customers in the United States pay for gas at the pump using a credit or debit card, it seems natural that the next step for the retailer would be to marry payment to mobile. In October, Visa and Chevron announced the launch of a mobile-payment program at more than 20 Chevron-branded stations in San Francisco and Silicon Valley that accepts any near-field communication (NFC) payment service.

“[It offers] consumers a simple and more secure way to pay at the pump with a range of mobile-payment services,” says Glenn Johnson, general manager of Americas Products marketing sales and services for Chevron USA Inc., San Ramon, Calif. These include Apple Pay, Android Pay from Google and Samsung Pay.

Jim McCarthy, executive vice president of innovation and strategic partnerships for Visa Inc., Foster City, Calif., says mobile payments are moving into the mainstream in the United States as consumers increasingly see the value of using their personal devices to purchase everyday items.

“Chevron customers can feel confident that each transaction is authorized through the Visa Token Service, which uses a unique digital identifier to process consumer payments without exposing actual account details,” McCarthy says.

He commends Chevron for its focus on both convenience and security in the payment process. “For this reason, we want them to help us broaden both the reach and consumer understanding of the many mobile payment options in the market today,” McCarthy says.

While mobile pay seems like the next best thing for consumers and retailers alike, the industry has been slow on the uptake—namely because of the costs involved.

“Upgrading fuel dispensers to accept contactless payments can be costly for station operators, depending on the pump configuration,” says Doris Lee, head of loyalty for Chevron. “But we expect wider adoption when retailers upgrade their equipment to comply with the outdoor EMV (Europay, MasterCard and Visa) liability shift in October 2017.”

Although mobile pay is still an evolving technology, its effects could swell beyond the smartphone.

“This will also help proliferate a major trend of bringing services to the screens and navigation systems within cars,” Weiss says. “Mobile pay is a fantastic way to engage consumers more frequently, which will lead to further adoption of digital payments in general.”