Not even a national weather crisis nor thousands of canceled flights could keep 72 c-store retailers and suppliers from gathering in Chicago for Winsight’s ninth annual Hot Dispensed Beverages Forum. While much of the country was digging out from a major snowstorm, attendees met to share ideas, trends and solutions for the hot-drinks category. 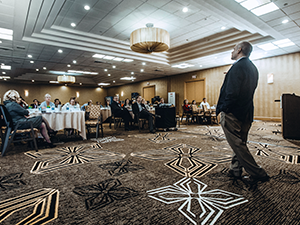 The stage was set by Technomic Associate Principal Donna Hood Crecca, who started the discussion by projecting a 2.8% increase in total hot-beverage sales through 2018, in a category responsible for $61.5 billion in sales. And while hot beverages were the focal point, presenters such as Farmer Bros., which pointed to a 115% year-over-year spike in sales volume for cold-brew coffee, spotlighted the big growth opportunity for cold-brew and iced coffee at c-stores.

With fast-food players, independent coffee shops, c-stores and even single-cup at-home coffee manufacturers fighting for share, the hot-dispensed battle lines have been drawn. But Leslie Williams, national sales manager for Auburn, Ala.-based Capitol Cups, believes the c-store segment has plenty of reasons to be confident. “It’s not strictly about price wars anymore,” she said. “We can boast about quality, because the quality of the coffee is right where it needs to be.”

Looking ahead, what can c-stores do to maintain and expand their competitive foothold? “It’s crucial to stay on-trend, but differentiate,” said Crecca.

Here’s a switch: The demographic group to watch isn’t millennials—it’s Gen Z. Everyone in the audience sat up and took notice when Meghan Liefeld, consumer insights director for Denver-based WhiteWave, announced that 13- to 17-year-olds are not just tomorrow’s coffee drinkers, but they’re also affecting the category today. “And they’re more likely than other groups to drink coffee away from home, so secure their loyalty now,” Liefeld said, citing data from Kantar WorldPanel.

“To attract these younger consumers, you have to boast about flavor variety and natural sweetener options that play down the acidity and bitterness of coffee,” Liefeld said. “Focus your marketing on what coffee can do for them, rather than how it tastes.”

Fifty-five percent of 13- to 17-year-olds’ coffee occasions are because coffee “wakes me up,” compared to 48% of overall consumers.

Function and energy play a central role in teens choosing coffee; they’re more likely to drink coffee for “quick energy” or “lasting energy” than other consumer groups. Only 34% of teens say that their coffee purchases are because they actually “like the taste.”

Teens have much stronger preferences for natural sugars, as well as assorted flavors such as hazelnut, mocha and vanilla.

Barista/podcaster/flavor enthusiast Levi Anderson (attending with Kerry Convenience) nudged retailers and suppliers toward bolder, culinary-minded applications for coffee and tea. His take on trends to consider:

The Creamer Shamed: That c-store customer who takes their sweet time opening lots of single-serve creamers at the coffee bar.

The Cool Downers: Customers who prefer that their creamer is cold so it can cool their coffee down.

The Hot Hot Hots: C-store customers who strongly prefer their coffee to be superhot.

The Mixologists: Perhaps most interesting, those coffee customers who blend creamer flavors when they stop in for their cup of joe.

Could there be an opportunity for c-stores to use flavored creamers as a way to market to consumers, perhaps with a contest around best mixed coffee flavors?

Liefeld of WhiteWave encouraged retailers to get creative. “This is behavior that has yet to be capitalized on,” she said.

Some numbers behind this behavior: