I have a folder in Outlook titled “Accolades.” I created it back when I started at CSP as a place to put the kind words my colleagues and industry peers have gifted me. If you’ve ever sent me a remotely complimentary email, you better believe I have it in that folder. 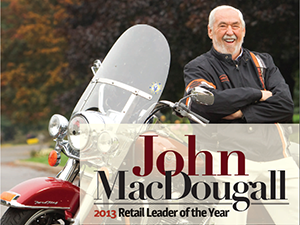 I don’t look in there often; it makes me uncomfortable to do so. But I do when I need motivation, when I need to remind myself of how I’ve grown and who was rooting for me along the way.

In that folder is an email I received Nov. 3, 2011. It’s in all caps. Within it is one sentence that deeply moves me every time I read it: “YOU HAVE MADE ME VERY HAPPY AND VERY PROUD.”

It meant the world to me then, and it still affects me today. It was from John MacDougall.

Story Within a Story

Our office has been a flurry of talk about CST Brands for nearly a year, as we tracked its story from industry darling to contentious shareholder target to acquisition prize.

For this month’s analysis of the deal (starting on p. 26), we spoke with upward of a dozen people, pored over documents from the U.S. Securities & Exchange Commission and dug deep into the annals of deals from Couche-Tard’s rich M&A history.

But while others have been speculating over just when Couche-Tard first approached CST, or whether the stock was undervalued, or what Kim Lubel’s future will hold, I keep coming back to John.

John MacDougall was the founder of upstate New York retailer Nice N Easy Grocery Shoppes, a chain that exemplifies one of the greatest things about our industry: incredibly innovative regional players. It was purchased by CST Brands in 2014 in a play that was just as much about cultural collateral as it was about store count. What remains to be seen is what will happen to Nice N Easy under the Circle K banner—and what John would have thought of his c-store legacy.

As the foodservice reporter at CSP, I was rarely lucky enough to write a cover story—until 2011, when Nice N Easy announced it was hiring three chefs and I got to hop on a plane to Canastota by way of Syracuse to spend two days with John and his crew. Five years later, those two days still resonate with me. I was treated by John like a reporter for Forbes, and John was treated by locals like the mayor of upstate New York.

I had the task of accurately and fairly distilling John’s philosophy—one he’d cultivated after 45 years in the business—into 4,000 words. I was nervous. I was overwhelmed.

I haven’t written a cover story since.

After the story came out, John sent me that email. It was one of the proudest days of my career, and that simple correspondence has since taught me what it feels like not only to knock something out of the park, but also when someone calls you out for it.

The Legacy That Matters

John again appeared on the cover of CSP in December 2013, when he was our Retail Leader of the Year. Reading it again now, it’s strangely, sadly, foreshadowing. In talking about his legacy, John worried about, in the words of our reporter Angel Abcede, “not so much the business itself, but the survival of its intent.”

“Culture is not transferable,” John said. “It’s in the heart and soul of the people who work there. It’s dependent on me and key people around here. If you cut out the heart, the culture is not going to survive.”

John was our Retail Leader of the Year in 2013. He died six months later, and Nice N Easy was sold to CST Brands four months after that.

I could write volumes on John’s innovations as a retailer, but what sticks with me is John the person. He held the sweet spot between tough and kind, that pinnacle of leadership in which people want to do right by him, not just because it’s their job. He taught me that surrounding yourself with the best people is paramount; that creativity and productivity are not mutually exclusive; and that perfectionism can, and should, still afford room for error.

Regardless of what happens to those stores, I am certain that the John MacDougall legacy will live on. He’s affected me, and therefore my philosophy of how to be a colleague, a boss, a parent. I want to listen mindfully, to go out on a few limbs, and to have fun along the way. And I want someone to someday keep an email that I wrote them, telling them just how well they knocked it out of the park.