The year 1990 marked the beginning of the decade before the last one. Seems hard to believe, doesn’t it? It was the time before a Clinton White House and a second Bush White House. It was a year marked by Iraq’s invasion 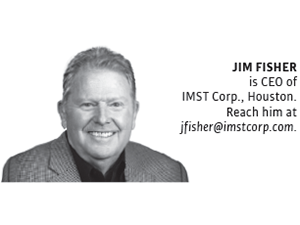 of Kuwait, which ignited the Persian Gulf War; the dissolution of the USSR; the forming of the European Union; the resignation of Margaret Thatcher; the unification of East and West Germany; the launch of the Hubble Space Telescope; and many other events that some of us remember and others of us have only read about.

The year 1990 also has great personal significance for me: It was the year that IMST Corp. was founded. I moved to Houston (arriving on Valentine’s Day) to do so and married my beautiful bride, who later became my business partner. It set off a mega-chain of events that began then and continues to this day.

So the year 2015 brings with it the celebration of two silver anniversaries for us: one company and one personal. And actually, it represents one ruby anniversary as well. The year 2015 marks 40 years of my being involved with the convenience retail and petroleum industry. Yep, it’s goin’ to be one heck of a year down here in southeast Texas.

During this newest century (and the final two decades of the previous one), we have conducted more than 10,000 projects in all 50 states and beyond our borders. Through the exposure and the lessons we’ve learned, our company has become adept at responding to the ever-changing and “shifting sands” of individual trade areas in distinct marketplaces. Certainly, what might be relevant in one area of the country does not have any significance in another—i.e., baked beans in Boston do not matter in Birmingham, and kolaches in Texas mean absolutely nothing in Minnesota.

Rules to Live By

At the 2014 Outlook Leadership conference I had the pleasure of conducting a workshop titled “Do We or Don’t We.” I will not attempt to cover that topic here; however, one of the points I presented was one graphic that I called “Just Some Thoughts.” It comprised ideas and thoughts that to me seem very appropriate for retail  companies.

Many of those who attended the conference asked if I would share the list with them (which I did and often do). I now want to share them with all CSP readers. If you’re interested, during 2015 we can dissect and discuss some of these thoughts in upcoming issues. So here goes:

And don’t forget the all-time truth that has been our company slogan for 25 years: The concept never changes, but the marketplace always does.

Make 2015 a year filled with success and prosperity.