A lot can happen in a year—particularly if you’re a c-store retailer. In CSP’s 11th annual Outlook Survey, twice as many retailers said electric charging was the alternative fuel with the greatest growth potential vs. last year. Almost one in 10 retailer respondents said they are considering delivery, and more than that are looking at click-and-collect as a potential new traffic driver. 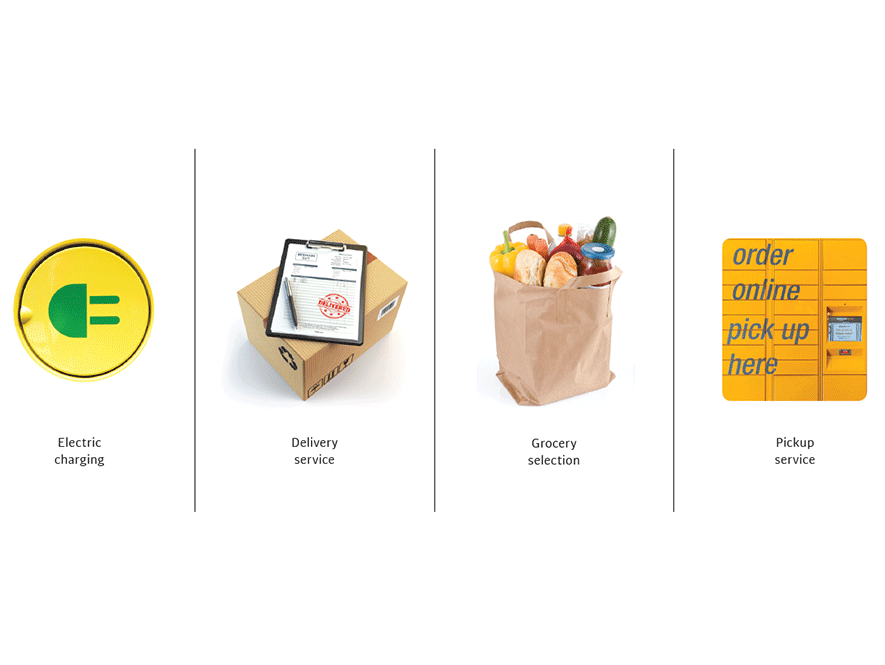 Consumers are also shifting gears: Nearly 10% more consumers said they’d prefer their local c-store expand its grocery selection than those who wished for more foodservice options, according to Technomic’s Q4 2017 C-Store MarketBrief, powered by Ignite, which CSP is pairing with the Outlook Survey this year for the first time.

Amid the equally challenging and stimulating disruption, and despite softer traffic as the year closes, the industry remains optimistic as always—and bullish on business despite the headwinds that come its way. Here's a look at our survey results ...

For five straight years, more than 50% of retailers have reported that business is “good” or “excellent” in CSP’s Outlook Survey. Sixty-two percent of retailers rated business in 2017 as “good,” although those who considered it “excellent” dropped by 12 points from the year prior.

Over and over again, operators credited growth of in-store sales from key categories, strong fuel margins and consumer confidence as reasons for their optimism.

“We had a slow start to the year but have made it up as the spring and summer progressed,” said one retailer. “If we continue as we have been, we should see a good year.” 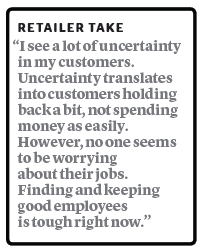 Even the tumultuous 2017 hurricane season had a silver lining for some. One Southern retailer was so positive, neither hell nor high water could affect their attitude: “The influx of adjusters, construction workers and volunteers helping our area recover from Hurricane Harvey has been a big boost to our  business in an ordinarily slow time of year.”

Though profits dropped 3.8% last year across the entire industry, according to the NACS State of the Industry Report of 2016 Data, 2016 followed two years of unprecedented growth. With profits exploding by 46.5% in 2014 to almost $10.4 billion, last year’s dip felt like a drop in the bucket. Retailers are confident the good times will continue, with 65% of survey respondents expecting 2017 sales to grow beyond 2016 figures, and 68% expecting business conditions to improve even more in 2018.

Consumers are likewise optimistic. Across all regions, shoppers rated their personal financial situation as either “excellent” or “good” this year. Those in the West felt the best, with 70% ticking one of the top two boxes, followed by 68% in the Northeast, 64% in the South and 56% in the Midwest. And 66% of consumers expect their finances to improve next year, while 30% expect them to stay the same. 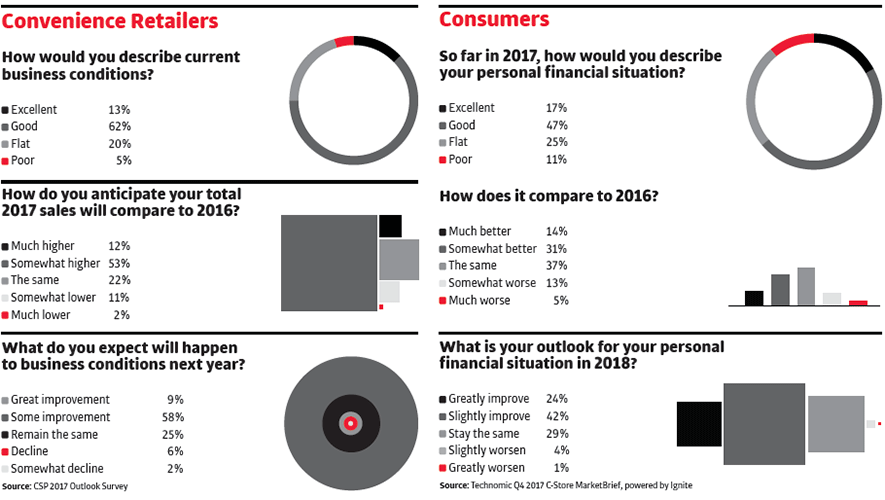 Next: Where's the Growth

Revenues from categories such as fuel and tobacco have been stagnant, down 4.3% and up 0.9% in dollar sales, respectively, in 2016, according to NACS SOI data. So retailers are busy finding categories to help pick up the slack. Foodservice has long offered higher profits—35% of gross-profit dollars in 2016 per NACS SOI data—but as that category continues to mature, other categories are also emerging as important moneymakers.

Retailers polled for the Outlook Survey overwhelmingly stand behind the tried-and-true performance of the foodservice category, with 44% of respondents indicating they would add or update their offering in 2017. Meanwhile, according to Technomic’s Q­4 2017 C-Store MarketBrief, 21% of consumers said they would like to see even more foodservice in the c-stores they shop. And one in four customers identify it as a desirable attribute for their favorite c-store. 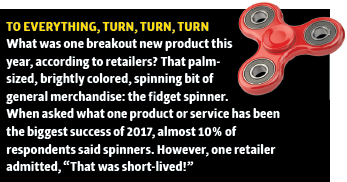 But consumers have other needs, too. Thirty-one percent of respondents to Technomic’s survey said they’d like to see more grocery products and services in the convenience stores they frequent.

No survey of retailers would be complete without a look at some disruptive trends. Of all Outlook Survey participants, 11% are considering order-ahead foodservice capabilities; 12% are adopting Amazon Lockers or another similar pickup service; and 4% are thinking about implementing delivery.

Retailers are also planning other, comparatively rote but nonetheless necessary updates. Nearly half of Outlook Survey participants said they plan to add or expand profit centers in 2017. And a whopping 72% of respondents said they were planning to remodel or refresh stores, compared to just less than 60% last year. 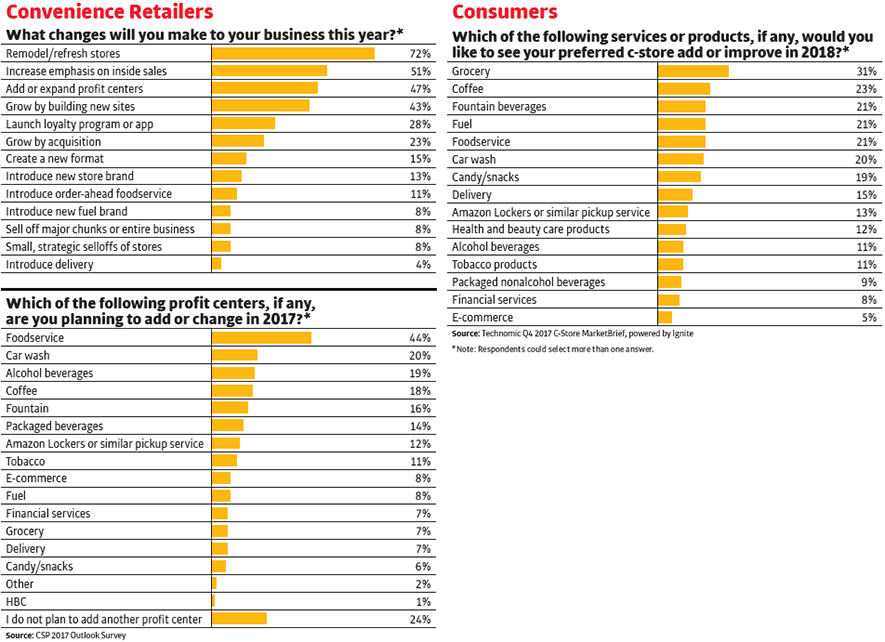 Next: How's the Forecourt?

Economists, alternative-fuel experts and the convenience-retail industry all agree: Electric-vehicle (EV) charging is the most likely “fuel” of the future. They just disagree on when. According to The Wall Street Journal, EV charging will reduce gasoline demand in the United States by anywhere from 5% to 20% by 2035—a wide range that is yet to be determined by market forces still in flux.

C-store retailers do have fuel disruption on their mind. In 2016, most Outlook Survey respondents chose diesel or ethanol blends as the fuel with the greatest growth potential. In the 2017 survey, 41% of respondents chose EV charging—nearly twice as many as those who picked ethanol, and nearly four times more than diesel.

There could be several factors behind this shift in opinion. EVs have made big headlines in 2017, from France, Great Britain and China’s planned shifts away from internal-combustion-engine-powered cars, to Tesla’s launch of its widely awaited Model 3 mass-market EV.

And some big c-store chains—including Sheetz, Royal Farms, Kum & Go and Maverik—have announced plans to add EV charging stations or ramp up their current installations in 2017. As one respondent says, EVs are simply becoming more common in the c-store ecosystem. (Interestingly, only 20% of respondents expect a long-term decline in fuel demand.)

“We will see [EVs] become more popular in the coming years,” says Jonathan Ketchum, vice president of retail for Energy North Group, Lawrence, Mass. “As the fuel landscape evolves, there is certainly a need to offer these services and meet the changing needs of the driving public.”

Meanwhile, Technomic asked consumers how their financial health affected their fuel-purchasing habits. Millennials in particular indicated that their financial situation does not influence where they fill up. Broken out be region, consumers’ decision around where they buy their fuel is a mixed bag, with most  reporting it does not affect their habits. 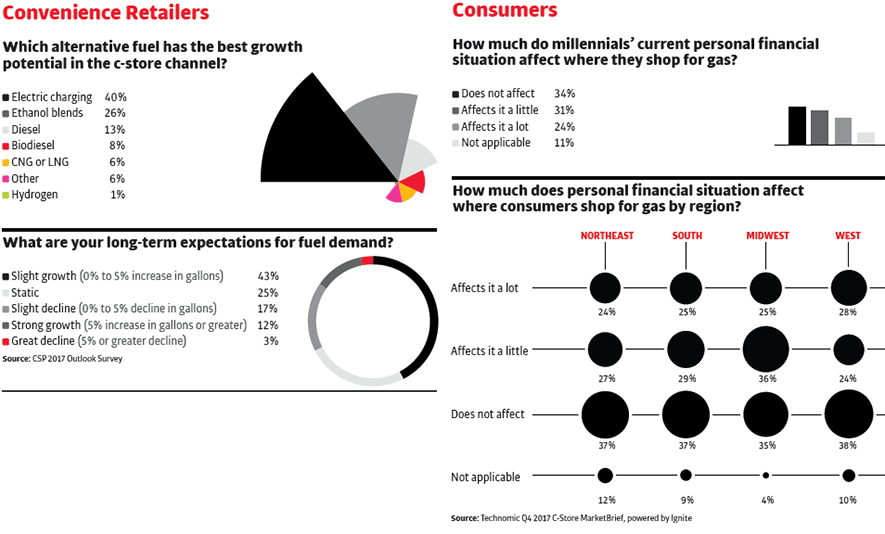 Next: Is Eating Growing?

Foodservice continues its winning streak with c-store retailers, with more than 40% of Outlook Survey respondents indicating they plan to add or expand upon their foodservice offer next year.

This is a noticeable dip from the 2016 Outlook Survey, in which nearly 60% of respondents planned on adding or expanding their foodservice program. But the decline could be attributed to the natural growth of foodservice as a long-trending profit driver.

Coffee also emerged as an important profit center for retailers looking to add or change something in their business. It’s a logical trend, given the industry’s strides toward improving the perception of c-store coffee programs. 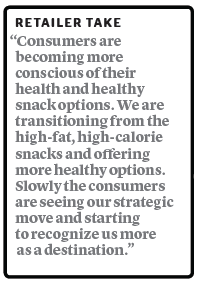 “I believe there are growth opportunities for our industry as today’s generations shop our stores regularly over many categories,” said one retailer respondent. “There are still many opportunities to grow foodservice.”

On the street, retailers are exploring various avenues in which to expand their foodservice reach. Sheetz, QuikTrip and others are offering order-ahead capabilities via mobile apps; Lone Oak Store in Eagan, Minn., has sprawled out to include a beer-and-burger bar and a speakeasy; and York, Pa.-based Rutter’s Farm Stores is preparing to roll out touchscreen ordering at the pump.

On the consumer front, Technomic data finds that the same number of millennials say their financial situation affects where they purchase foodservice items as those who say it doesn’t. 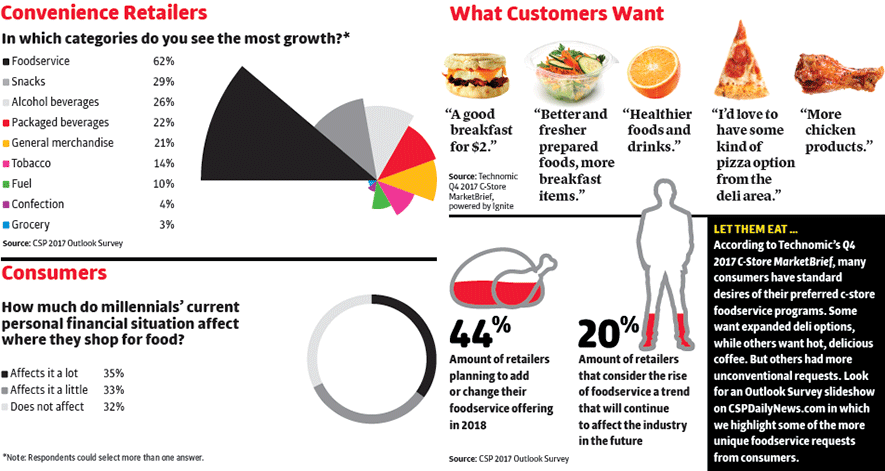 Next: What Lies Ahead?

Despite a general sense of optimism that extends across most of the retailers CSP polled, challenges remain—in part driven by the strong economy. Employee turnover, minimum-wage increases and increasing c-store competition are top of mind. Employee turnover and minimum-wage increases were top-rated challenges last year as well, but fewer respondents (28% of retailers) are concerned about credit-card fees compared to last year (35%).

This year, competition in and outside the convenience channel were highly rated concerns, with 44% of retailers citing increasing c-store competition and 31% reporting competition from nontraditional retailers, compared with 25% and 21%, respectively, in 2016. 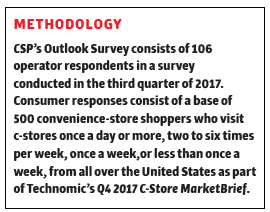 Meanwhile, 24% of Outlook Survey respondents consider economic conditions as their biggest challenge, which highlights the regional disparity of the country’s growth. “[Our] customers are not spending the next dollar,” said one retailer in the Midwest. “Weather was cold and rainy. ... Employee costs are [rising] faster than ever before. And we are competing for the average talent.”

Another retailer worried about the growth of the industry in general: “Competitive intrusion [is] growing faster than demand.”

Competitive threats from home-delivery to e-commerce companies such as Amazon and Wal-Mart also remain a concern.

“[Our] customer count is down,” said one retailer. “Customers are either cutting back or buying online.” 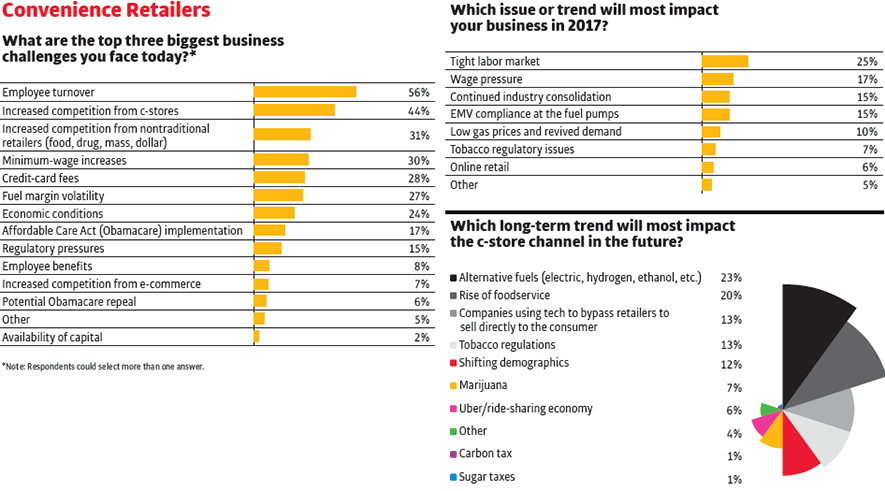