Hungry workers in the oil boom-town of Dickinson, N.D., struck it rich in January—at least in terms of food choices. 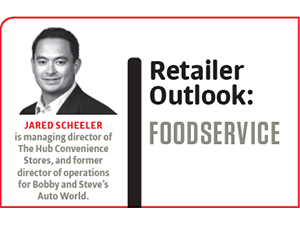 With the grand opening of new c-store The Hub, they can now grab a Cinnabon cinnamon roll for breakfast, order a Schlotzsky’s sandwich for lunch and return for a Godfather’s pizza at dinner. If they want something even easier, The Hub has proprietary grab-and-go options, including sandwiches and salads.

“With all the food offerings we have, we’re arguably a restaurant first, convenience store second,” says Jared Scheeler, cofounder of the new store.

The Hub’s focus on becoming a food destination requires it to strike a balance between the two. The 7,840-square-foot store has 26 chairs in its dining area but could fill three times that if it had room, Scheeler says.

“The convenience store of the future can’t continue to rely on CPG products and tobacco. It has to be heavily invested into food, and that’s the thing we decided we would do from the beginning,” he says.

Dickinson sits atop the massive Bakken shale formation. A rapid rise in production in the region has drawn workers from all over to this city of 35,000. Most of them come from outside the area and are familiar with high-quality foodservice at c-stores. This core customer base has no problem embracing The Hub as a fresh food destination.

Locals, however, are a bit more wary of the concept because it’s new to the region, says Scheeler, who grew up here. The novelty brings both the challenge of overcoming stereotypes about c-store food and also the opportunity for The Hub to be a trendsetter.

Scheeler spent about 16 years in the c-store industry—much of it at Bobby and Steve’s Auto World in the Twin Cities—before co-founding The Hub with his business partner, Chris Fitterer of local fuel distributor Fitterer Oil Co. He gained valuable insight while at Bobby and Steve’s on how to run a made-to-order kitchen and deal with franchise/licensee programs. Scheeler chose Godfather’s Pizza because he wanted a “non-convenience-store pizza” for The Hub. And Schlotzsky’s represented an upscale sandwich offer. The fact that Schlotzsky’s and  Cinnabon are owned by the same parent company sealed the deal for him.

The Hub’s proprietary brand, made on site, is The Bite, which includes fresh baked goods, hot and cold sandwiches, burgers, wraps and appetizers. The gourmet-style sandwiches feature fresh-baked buns.

The Hub is open around the clock, but most of its business comes in the morning as oil workers head out for the day.

“They’re buying a hot breakfast to consume immediately, as well as lunch and possibly even dinner options for later in the day,” Scheeler says. “We get large transactions in the morning, and then it tapers off .”

Snack opportunities tend to center on the roller grill, appetizers and the afternoon bakery. “The morning is very heavy with doughnuts and muffins,” he says, “and then we transition into more cookies and bars and kolaches in the afternoon.”

Just a few weeks after opening, carryout pizzas were proving popular as evening fare, especially as more locals began to give the store a try. “As people get into the store and see the building and our interior decor and, of course, sample our foods, they are saying, ‘Wow! I wasn’t expecting this,’ ” he says.

The balance of different cuisines and a variety of products help keep the food options from cannibalizing each other. Customers also are looking to fulfill different dining needs in choosing between the franchise or proprietary options, he says.

Scheeler uses scan data to monitor what is selling—for example, what kind of protein customers prefer—and

what’s not. He compares this to data from manufacturers, as well as recommendations from suppliers.

“For best practices, I like to see what the QSRs are doing,” he says. “But more so, I think the best innovation in food is coming from the convenience store industry right now.”

“You see a higher quality of grab-and-go products now in the industry than you did five years ago. The quality is what really stuck out to me: the food product itself, [and] the packaging and marketing surrounding those products,” he says.

After The Hub had its grand opening Jan. 8, Scheeler waited to see which foodservice items emerged as  favorites before moving forward with major new promotions. “I didn’t want to force signature items in foodservice on our customers,” he says. “I wanted to let those organically happen. And they are.” A new branded product that is promising: Godfather’s Mac & Cheese pizza.

The Hub’s coffee program, The Grind, is doing well, Scheeler says. And among proprietary food, customers are reaching for fresh-baked kolaches. “We have hot kolaches with sausage and cheese that have become a hit in the afternoon, as well as sweet kolaches in the bakery case,” Scheeler says.

Throughout the industry, convenience stores continue to face doubters about their foodservice programs and have to work to disprove negative perceptions, Scheeler says. C-store foodservice is being judged at every point, from the exterior of the building to the restrooms, including the floor, the corners and the baseboards.

His new enterprise also faces the uncertainty of life in the oil patch. Falling oil prices have taken a toll in recent months, meaning less traffic and fewer of those hungry oil workers. “Many companies are in a holding pattern, waiting to see what’s happening with the barrel price,” Scheeler says. “We did see a slowdown immediately. As it’s creeping up, that has benefited us.”