After a 20-year symbiotic relationship, Wal-Mart Inc. announced it plans to build and operate its own gas sites. Leaving Murphy to operate the current and to-be-built Murphy USA locations. 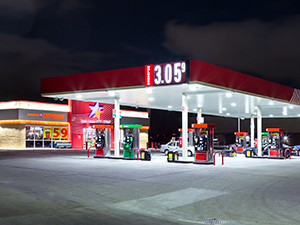 Murphy was caught off guard. As recently as April 2015, the operator saw potential for an additional 1,600 sites at

Wal-Mart supercenters. It was accelerating openings and updating its store design.

So what now? What is plan B?

Murphy USA has set a slower pace of 50 new Murphy Express sites a year, beginning in 2018, with a shift toward larger, 1,200-square-foot stores within the “halo” of a Wal-Mart supercenter.

And there’s something truly new for Murphy: larger stores. The company is rolling out a 3,500-square-format in Arkansas, Colorado and Louisiana, and earning margins 30% higher than its 1,200-square-foot sites [Click here for slideshow.]. A few of these locations are planned for 2016.

The theme: slower growth but higher-quality locations that offer even greater returns. Murphy has embraced plan B.

“This isn’t a fork in the road where you come to a screeching halt,” Clyde said during a January 2016 investor conference. “This is one where you just see the exit sign way ahead and you keep your foot on the pedal, and you realize you’re going to go right instead of left and you just don’t look back.”

Murphy’s original retail model evolved around the gravitational pull of the Wal-Mart supercenter.

“The biggest benefit [to Murphy] is the traffic flow associated with the Wal-Mart supercenter. It’s very difficult to replicate that,” says Ben Bienvenu, research analyst for Stephens Inc., Little Rock, Ark.. “If you’re a low-cost, low-price retailer, you need that throughput and volume to earn a return that’s suitable to shareholders. Especially with a small-box strategy, it’s critical.”

But Murphy USA made tradeoffs to get access to that traffic flow. For one, Wal-Mart had a say in what Murphy USA kiosks stocked. For example, according to one source familiar with the retailers’ partnership and who spoke to CSP on condition of anonymity, Murphy was originally not able to discount on cigarette cartons, instead having to keep prices at a fixed multiplier of the pack price. Only in the early 2000s, when Wal-Mart cut its cigarette presence in supercenters to one checkout aisle, was Murphy USA free to discount carton prices. The source says cigarette sales quadrupled, and Murphy went on to become one of the top U.S. cigarette retailers.

Another tradeoff was having to accept some supercenter sites that were not optimal for Murphy Express.

“When we took a portfolio approach doing a large deal, whether it’s 200 stores or more, with Wal-Mart, you had to accept that you not only got those higher-return stores, but you also accepted some lower-return stores and had to view it as a portfolio,” said president and CEO Andrew Clyde during the investor presentation.

Now Murphy is free to target locations that offer the highest potential fuel volumes, tobacco sales and margins, even though the number of new sites might be lower, dropping from up to 150 Murphy USA sites per year at its peak to 50 Murphy Express locations in 2018 and 2019. The success of plan B depends on Murphy USA’s ability to find the sites.

“One opportunity is to build a larger box, driving a better mix of margin for their business,” says Bonnie Herzog, managing director of beverage, tobacco and convenience-store research for Wells Fargo Securities LLC, New York. “From a shareholder perspective, it’s about generating more consistent cash flows in the future and returning more to shareholders.”

He points to recent data showing returns on 1,200-square-foot Murphy Express and Murphy USA sites at parity, while per-store EBITDA at Murphy Express sites has averaged more than 11% higher.

It shows what Murphy USA can do with extra breathing room, especially in key industry categories such as tobacco, snacks and beverages. A new five-year distribution agreement with Core-Mark International, built with fixed, better rebates and lower delivery fees, promises the ability to widen the box’s profitability.

While the next phase of growth promises to be exciting for Murphy, it also will be a balancing act, analysts say.

“It’s inherently precarious to be a business partner and a competitor with Wal-Mart,” Bienvenu says. “How do you navigate it?”

While Murphy USA cannot replicate Wal-Mart supercenters’ traffic flow, it stands to benefit by building Murphy Express sites nearby. The object is to prioritize sites near supercenters that seem like unlikely candidates for Wal-Mart’s own fuel offer—the lot is too small for a gas canopy and kiosk—and where the demographics are attractive.

“It’s inherently precarious to be a business partner and a competitor with Wal-Mart.”

Also important: targeting new markets with a fuel-supply advantage, such as a high market density and access to pipelines. Murphy recently announced plans to enter Nevada, Utah and Nebraska.

The company plans to avoid markets with high regulatory risks around fuel, tobacco, labor and permitting. Instead, it will focus on areas where it will get “the best returns and waste the least amount of effort,” Clyde said. For now, it does not plan to partner with other big-box retailers such as Target on fuel.

And when one of these new sites, as Murphy USA itself acknowledges, comes into direct competition with a Wal-Mart gas station? Watch out. Consider that Wal-Mart’s Sam’s Club chain ranked seventh in GasBuddy’s 100 U.S. Best Value Brand ranking for 2016, selling gas at an average of 10.8 cents per gallon (CPG) below its local competition. Coming in at Nos. 10 and 12? Murphy USA and Murphy Express, at 6.1- and 5.5-CPG discounts, respectively.

Analyst Bienvenu expects both to be aggressive on fuel but says Murphy USA’s very low break-even—less than an estimated 2 CPG in 2016—will give it an edge.

That’s thanks partly to expanding merchandise margins from a broadened product mix with the larger stores, and low fuel-supply costs.

“They have years of shipping history on the Colonial Pipeline, a preferred standing in the event of supply issues and when capacity is constrained,” he says. “They have the flexibility to source low-cost fuel from out-of-market sources, to allow arbitrage. It takes time to accrue that.”

With the rest of its remaining Wal-Mart supercenter sites rising this year and next, it will be at least a few years before Murphy USA’s strategy begins to fully play out. Signs of a successful separation include strong store-level economics at Murphy Express sites, especially if they improve upon Murphy USA metrics.

But what if, after a few years of getting its hands dirty with fuel, Wal-Mart were to buy Murphy USA?

“It would make a lot of sense,” says Damian Witkowski, a research analyst for Gabelli & Co., Rye, N.Y. “Once Wal-Mart figures out how to best leverage fuel to drive their store traffic, they may just want to buy the fuel stations already in front of about a third of their U.S. supercenters.”

When asked about the possibility during the investors’ conference, Murphy’s Clyde did not comment.

Murphy management would likely bring any serious offer to the board to evaluate. But ultimately, it could decide it likes things just the way they are.