The vaping industry has been on a regulatory roller-coaster ride for the past year. Tough new deadlines and marketing/testing requirements handed down by the U.S. Food and Drug Administration (FDA) and delays in pro-vaping legislation have kept manufacturers and retailers bracing for a radical revamp of the category, which hit $3 billion in c-store sales in 2016, according to estimates from Nielsen and Wells Fargo Securities. 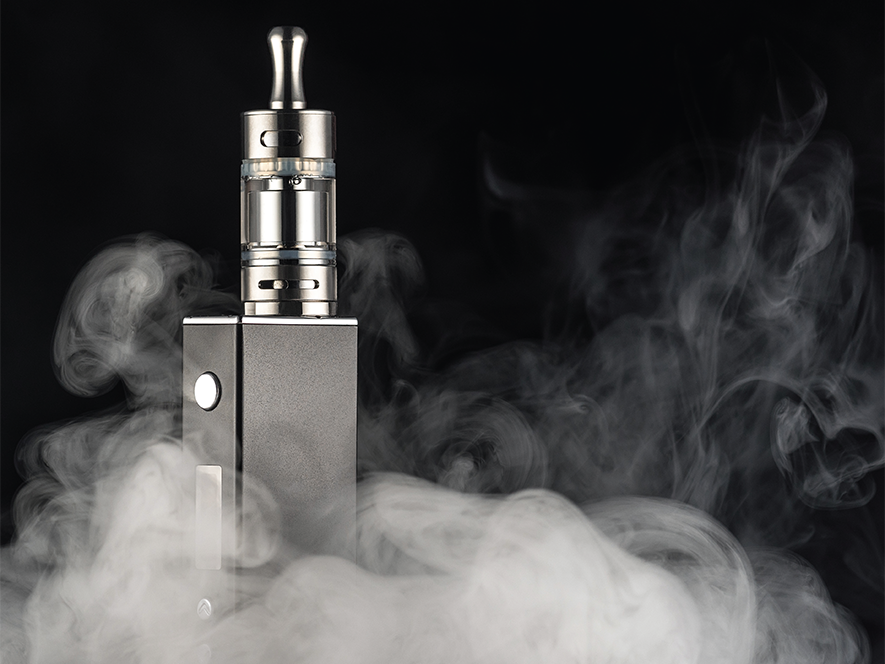 While some got off the ride and headed for the exits, others got right back in line, eager to

show their support for a product that still has opportunity for evolution. They are now strapped in and repeating that slow climb up the hill.

Buckle up: A new season of thrills and chills is about to begin in Washington, D.C.

Last April, hopes were high in the vaping industry after the bipartisan Cole-Bishop Amendment was included in the fiscal 2017 Agricultural Appropriations bill.

Like the FDA Deeming Authority Clarification Act of 2015—also known as HR 2058—the amendment sought to redefine the FDA’s forthcoming “deeming” rule.

That new deeming rule, released in May 2016, sent vaping supporters into a panic. Among the new restrictions, the most alarming to the vaping industry is the FDA’s predicate-date stipulation. This refers to the 2009 Tobacco Control Act, which says tobacco products on the market prior to Feb. 15, 2007, could be “grandfathered” in, meaning manufacturers do not have to submit a premarket tobacco application (PMTA) to the FDA.

Manufacturers of vaping products not on the market as of that date will have to show that the products meet the applicable public health standard set by the law to receive marketing authorization from the FDA. They also must undergo a time-consuming PMTA process (the FDA estimates that each PMTA application takes an average of 1,713 hours to compile) that could cost the manufacturer millions of dollars per product.

Because the effective date of the regulations is Aug. 8, 2016, manufacturers cannot introduce new e-cigarette products without completing the PMTA process and obtaining FDA approval. Products that go through this process will be allowed to remain on the market for an extra year, depending on the date the FDA rules on their PMTA. If the FDA denies an application prior to that additional year concluding, the manufacturer would have to take the product off the market.

By early fall, things looked bleak when it appeared the Democrats could win the White House and one or both houses of Congress. But the election of Donald Trump, who promised regulatory reform and named or suggested cabinet picks possibly supportive of vaping, helped calm some of the industry’s worst fears.

Then, in December, the U.S. Surgeon General issued a damning report warning of the growing popularity of e-cigarettes among youth and young adults, which surely leaves clouds of doubt in the minds of legislators about whether or not these products should be more tightly regulated.

But once Republicans learned they would be firmly in control of the White House and Congress, they no longer felt the need to rush through the appropriations bill—putting the Cole-Bishop Amendment and HR 2058 in limbo. Although they may be rechristened and revamped in the coming weeks, they will likely survive in some form and even have a chance of passage this spring, experts say.

Some vaping experts are expressing cautious optimism at the start of 2017, despite the FDA’s ticking clock. Just ask Lyle Beckwith, senior vice president of government relations for NACS, Alexandria, Va. He says 2016 was the most pivotal year yet for the vaping industry, “a period when the future and viability of the category certainly came into question.”

Nevertheless, Beckwith says he’s more optimistic nowadays than he was several months ago.

“We’re in a better place today because there may be more options available to us,” he says. Beckwith cites President Trump’s promised regulatory reform, the new FDA commissioner’s agenda or congressional action. Cole-Bishop, he adds, “seemed like the only real basket in which you could put your eggs before the presidential election. Now, there are several baskets.”

“Donald Trump’s first budget has to be done by the Republican Congress in the next few months. That is our most likely opportunity to enact something like Cole-Bishop, with the most important priority being modernizing the 2007 predicate date via a policy rider in an appropriations bill that’s likely to come to the House Appropriations Committee,” says Conley. “There’s also hope that an alternative regulatory framework could be developed by Congress.”

Meanwhile, manufacturers of vaping products are proceeding with caution.

“The regulations have clearly had a chilling effect on the outlook for the vapor category and appetite for investment,” says Brice O’Brien, executive vice president of public affairs and chief communications officer for Reynolds American Services Co., Winston-Salem, N.C., which manufactures Vuse e-cigs. “[The FDA] created a vast amount of additional costs, bureaucracy and uncertainty; nothing is clear in the regulation. As such, companies don’t have any clarity or certainty of what’s required by the FDA to approve an innovative new product.

“Would you invest significant resources in a new product innovation with no idea what regulators were going to specifically require for you to sell the new product?”

New Players on the Hill

The good news for the industry is the wider roster of heavy hitters in Washington stepping up to bat.

Beckwith is particularly energized by two newer vaping advocates: Rep. Duncan Hunter (R-Calif.) and Sen. Ron Johnson (R-Wis.). In a letter sent to Vice President Mike Pence, the congressmen asked that Trump repeal or suspend the FDA’s new rule, which, they argue, “threatens to crush the e-cigarette industry and potentially hurt the public’s health by making it harder for consumers to access products that serve as an alternative to smoking.”

Other key vaping-friendly players on the Hill include Rep. Collin Peterson (D-Minn.) and Sens. Richard Burr and Thom Tillis, both Republicans from North Carolina.

Conley of the AVA is optimistic that Hunter and Johnson, in particular, can better educate Trump on the vaping issue and spearhead the charge in early 2017.

“We are hopeful for an appropriations rider, perhaps some legislation by Hunter or Johnson, and then executive action,” he says.

Justin Wiesenhan, vice president of regulatory affairs for Charlotte, N.C.-based Mistic E Cigs, thinks Pence and Rep. Mick Mulvaney (R-S.C.), Trump’s pick for director of the Office of Management and Budget, are two others who could push a pro-vaping legislative agenda forward.

“We believe the Trump administration will seek to help all small businesses, including the vapor industry,” says Wiesenhan. “Although the Trump transition team has not made a public comment regarding vaping products, Vice President Pence was an opponent of the Tobacco Control Act (TCA).”

So what happens if Cole-Bishop, HR 2058 and other forthcoming measures ultimately fail?

“Plan B is you keep fighting and find another path,” says Conley. “You can even go so far as to try to do a House floor amendment on another bill, and there may be other stand-alone legislation.”

If Cole-Bishop doesn’t pass in some form, Wiesenhan says his company will lobby for a longer compliance period to provide the necessary evidence and data the FDA is seeking in the approval process. He’s confident, however, that the grandfather date will change to the effective date of the rule, Aug. 8, 2016.

While Cole-Bishop is important, O’Brien of Reynolds American Services says it won’t solve all of the vapor industry’s problems.

“It’s a shorter-term piece of legislation addressing the bureaucratic uncertainty of the new regulations,” he says. “What’s needed moving forward are clear, specific regulations that encourage responsible innovation and investment that can result in the development and marketing of smoke-free products that adult smokers may consider switching to if they don’t wish to quit tobacco use completely.”

Predicate Is the Subject

Beyond the predicate-date problem, vaping supporters are concerned about other issues, including tobacco 21 laws, which raise the minimum legal age to purchase tobacco products from 18 to 21, as well as flavor bans and taxation.

Cases in point: Kansas imposed a 20-cent-per-milliliter tax on e-cigarettes as of 2015. Pennsylvania passed a 40% e-cigarette tax in summer 2016. And in November, California passed Proposition 56, which will eventually result in an e-cigarette tax that is the equivalent to that levied on cigarettes.

Meanwhile, the National Parks Service announced plans to ban e-cigarette use wherever smoking is banned. “It’s death by 1,000 paper cuts,” says Conley, “but no major knife wound yet.”

But it’s the Aug. 8, 2018, prohibition date, looming about 18 months ahead, that’s top of mind for most involved—especially those worried about the survival of the vaping category. Karen Nuckols, senior specialist of media affairs for Richmond, Va.-based Altria, manufacturer of MarkTen vaping products, emphasizes that calendar matters are a priority.

“Setting a new predicate date will support innovation for e-vapor products that many in public health say have the potential to reduce the harm caused by smoking,” says Nuckols.

Conley believes the vaping herd will be significantly thinned out by the prohibition deadline.

“We’re already seeing good entrepreneurs leaving this industry because uncertainty is bad for business,” he says.

Convenience retailers who want to promote legislation and organizations that are friendly to vaping have several options.

Lyle Beckwith of NACS suggests a few different ways to get politically engaged, including donating to a political action committee (PAC) or the campaign of a pro-vaping member of Congress, or hosting fundraisers.

“Get to know your local members of Congress,” Beckwith says. “Get them to understand what your convenience store means to the neighborhood and to their congressional district.”

“Retailers should also focus on proposed ordinances introduced at the state or local and municipal levels. This is where retailers can often have the most influence,” says Karen Nuckols of Altria. She suggests retailers focus on excise-tax increases; efforts to increase the legal age to buy tobacco and e-vapor products to 21; bans on flavored or menthol products; and business-permit restrictions on retailers selling tobacco and e-vapor products.

Also, consider joining and supporting trade associations and advocacy groups. These include: