BENTONVILLE, Ark. -- In its home turf of Bentonville, Ark., the nation’s largest big-box merchant is testing the waters of convenience retail, opening its first Walmart To Go store in early spring. 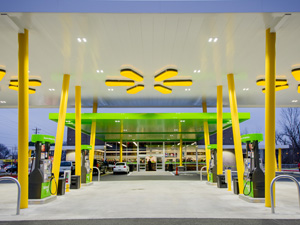 The retail giant is testing “new ways of bringing convenient solutions to our customers,” a Walmart spokesperson says in an email to CSP magazine. Describing the store, Betsy Harden, who is in the company’s media relations department, says the store features a broad assortment of basic products—from paper towels to snacks—at prices that will match its Walmart supercenters.

And just as the c-store channel itself is grappling with the potential of foodservice, the new Walmart To Go store has a “fresh food side” to provide solutions for breakfast, lunch and dinner, according to Harden. It will feature a coffee bar, fresh sandwiches, salads and Marketside Meals including pizza.

At 5,000 square feet, the new Walmart To Go offers more than 3,500 products, she says. The forecourt has eight MPDs under a brightly lit canopy, sporting an attractive lime-green color scheme that matches the c-store graphics.

The front façade of the store is largely glass, and it appears shelving is kept below chest height.

Though Walmart To Go is a one-of-a-kind store, the big-box chain has been dabbling in smaller format stores of late. Since 2011, it has opened about 20 pared-down Walmart Express stores in the range of 10,000 to 15,000 square feet in markets such as Chicago and cities in North Carolina and Arkansas. 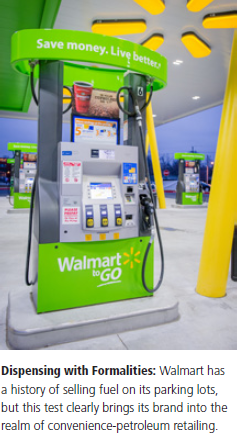 Many speculate Walmart’s continuing push into urban areas via smaller formats is a way to stimulate growth amid flagging sales at its larger supercenters. For at least one c-store observer, it’s another way for the mass merchant to “leverage their distribution.”

Walmart has an edge over many online retailers because it can deliver products to consumers without a shipping fee, Taylor says. (See cover story on e-commerce.)

Bill Simon, Walmart’s U.S. president and CEO, recently said that its “small-store expansion … including fresh, pharmacy and fuel, will help us usher in the next generation of retail.”

In what industry observers have cited as a strategy to quell competition from the dollar-store channel, Wal-Mart has announced that it is significantly accelerating its capital plan for U.S. small-store format openings for the current fiscal year.

Bentonville, Ark.-based Wal-Mart Stores has 10,942 sites under 71 banners in 27 countries and e-commerce websites in 10 countries, and fiscal-year 2014 sales of more than $473 billion.

Clash of the Titans

While simultaneously stepping into the c-store channel with its first Walmart To Go store, big-box giant Wal-Mart Stores Inc. has taken on a common foe for convenience retailers: the major credit cards.

Earlier this spring, the Bentonville, Ark.-based chain sued Visa Inc., Foster City, Calif., for $5 billion, accusing the credit- and debit-card network of excessively high interchange fees, several months after the retailer opted out of a class-action settlement between merchants—including convenience stores—and Visa and MasterCard Inc., according to Wal-Mart officials.

Visa declined comment on the suit, filed in the U.S. District Court for the Western District of Arkansas in Fayetteville. In December, a federal judge in Brooklyn, N.Y., approved the $5.7 billion class-action settlement between merchants and Visa and MasterCard despite the objections of thousands of retailers that complained it was inadequate.

Wal-Mart, Amazon and Target, as well as and many of its member retailers, were among those opting out of the monetary components of the settlement so they could have the freedom to seek damages on their own.

Those businesses complained about a broad litigation release in the settlement. The release forces all merchants who accepted Visa or MasterCard, and those who will in the future, to give up their right to sue the credit-card companies over rules at issue in the case or similar ones they may make in the future.

“This lawsuit against Visa seeks damages from price fixing and other antitrust violations that took place between Jan. 1, 2004, and Nov. 27, 2012,” Walmart spokesperson Randy Hargrove told CSP. “Walmart and all other merchants were subjected to rules and practices that harmed competition, suppressed fraud preventing technology in the U.S., and inflated interchange fees charged to merchants when customers used their credit and debit cards. As a result, many merchants were forced to pass on some of these artificially high fees to consumers.”

Wal-Mart contends that Visa, in concert with banks, sought to prevent retailers from protecting themselves against those swipe fees, eventually hurting sales.

Is Walmart to Go a Game Changer?