There’s a major influencer in the snack industry, one that’s affecting how all generations are consuming snacks and how manufacturers are bringing products to market. 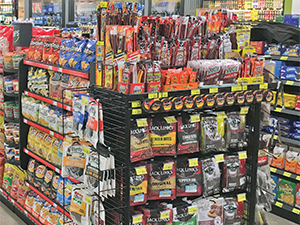 And no, it’s not just their sheer headcount. Millennials snack a little more than three times a day, compared to just more than two times for everyone else, according to Euromonitor. And they also put a greater emphasis on wellness, corporate transparency and product differentiation—three themes on heavy rotation in the snack aisle.

Within these three themes and beyond, millennial consumers are helping  park a series of disruptors in the snack industry.

It’s propelling both growth and innovation in a category that now makes up 40% of the entire U.S. packaged food market.

One of the biggest disruptors in the snack set happened when the category grew a new branch, one that mirrored consumer demand for functional sustenance for their busy lives: better-for-you snacks. They’re still just a blip compared to sales of traditional, more indulgent snacks, but they’re seeing the fastest growth.

“We feel the greatest growth will come from better-for-you, healthier, fresh and organic snacks,” says Carla Boyington, director of category management for convenience-store wholesaler Core-Mark, South San Francisco, Calif. “Today our set recommendations have 20% better-for-you options; in 2017, that will be increased to 30%.” Next year, Core-Mark plans to offer better-for-you options in all edible categories, including candy, snacks, bakery, beverages and foodservice.

According to Jordan Rost, vice president of consumer insights for Nielsen, New York, there are two types of better-for-you snacks: those that are inherently healthy and those that are manufactured to be good for you. Rost says products from the former category, such as fruit and yogurt, are popular with younger consumers, while packaged snacks manufactured to be healthy, such as low-sugar, low-calorie products, appeal more to older consumers.

At Stinker Stores, based in Boise, Idaho, naturally healthy foods are doing extremely well. Earlier this year, the chain’s 64 locations introduced local produce via fruit cups and vegetable cups, as well as cheese-curd cups, all merchandised in an open-air cooler. “These products are rocking and rolling,” says merchandising manager Lon Audet.

The key is providing freshness cues, he says: “These products give the customer the perception that c-stores have healthier options, and they start looking for our better-for-you products.”

Younger generations are also putting more value on clean labels—those with fewer, more familiar and easier-to-pronounce ingredients. “People are trying to get closer to fresh and natural and are taking note of ingredients,” says Darren Seifer, executive director of The NPD Group, Port Washington, N.Y.

In fact, the ingredient list is beginning to trump flavor and taste in importance, says Tim Powell, vice president of consulting for Q1 Consulting, Chicago. “Not that items don’t need to taste good, but if all those other elements (like function, clean label, non-GMO, protein) are there, they are willing to sacrifice a little reduction in flavor,” he says.

Anything manufacturers can call out helps, says Anna Bettencourt, snack category specialist with VERC Enterprises, Duxbury, Mass. “Consumers shop by buzzwords, by the words a package has on the front.” Key buzzwords, she says, are GMO-free, high-protein and low-sugar.

Be it distrust of larger corporations, desire to support the little guys or rewarding the innovation inherent in smaller companies, younger consumers are also driving supplier disruption. The results include the growth of midsized companies and a flurry of acquisitions of niche brands by big legacy players.

Nielsen sees strong growth (about 6 percentage points in the past four years) outside the top 100 food manufacturers, while some of the larger companies are experiencing flat growth.

Future innovation will likely come from these smaller firms, says Powell, “because they are flexible and not tied to layered corporate structures.” They are also “more nimble,” says Seifer, and can quickly respond to trends in consumers’ ever-evolving tastes and preferences.

The niche brands that appeal to consumers—and the big food corporations—often offer premium, natural, organic or simply more healthful products and have a strong sense of corporate responsibility and sustainability. All this has led the acquirers to keep a low profile when buying a smaller brand and give it as much autonomy as possible.

Another advantage for these little companies is that they’re domestically based, which especially appeals to millennials, says Tom Vierhile, innovation insights director for New York-based market research company Canadean.

The disruption is coming at the category level as well, with a few categories getting a notable infusion of innovation.

Drinkable yogurt and squeezable fruit. Dannon, Chobani, Lala, Lifeway, Yoplait, Stoneyfield Farms and Yakult have drinkable-yogurt products on the market, and while the subcategory is not yet setting the category on fire, it is  making itself heard. From 2014 to 2015, per capita consumption was up 7.1%, according to Canadean. This growth is mostly coming from younger consumers: Eighteen percent of 15- to 17-year-olds are open to drinkable yogurt, but only 7% of 55- to 64-year-olds are.

The popularity of these drinks comes down to several factors, Vierhile says. They have about half the sugar of a can of soda, they’re resealable and they are high in protein—which a 2015 Canadean survey showed is important to 20% of consumers.

Fruit is also taking a more liquid form as squeezable fruit in pouches, which is beginning to appeal to tweens, teens and young adults, says Vierhile.

Companies such as GoGo squeeZ and Munk Pack are moving and shaking in  this category. Munk Pack’s products—oatmeal fruit squeezes in five flavors, including apple quinoa cinnamon and raspberry coconut—are being marketed as a cereal alternative, and the company is quoting 450% growth in conventional grocery in the past six months, which “does suggest this is a category and a brand on the rise,” Vierhile says.

Calling it baby food reimagined, he doesn’t think retailers are sure what to do with the category, “but they’re another product that has potential to take sales away from traditional snacks.”

Alternative snacks. Sales of alternative chips and tortilla chips are growing faster than the traditional potato variety, says Rost of Nielsen, who credits the rise of the latter with the growing Hispanic population and the parallel growth in both sales and variety in the dip category.

Alternative chips are beginning to appear on shelves at VERC Enterprises, but regular chips are still the runaway winners in this category. What’s really picking up speed is the popcorn category, primarily because it’s lower in calories, says Bettencourt. Brands such as SkinnyPop, Frito-Lay’s Smartfood and Rocky Mountain from Open Road Snacks are seeing sales rise. Smaller popcorn sizes are the best sellers in the category, with butter and cheddar leading flavor favorites.

“Edge-of-market” products. Some companies are in experimentation mode without veering too far from the tried and true.

“You are seeing a lot of innovation these days from companies innovating at the edge of the market—not creating a whole new category, but a spin on something,” says Vierhile of Canadean.

While most meat bars are available now at specialty retail locations such as Whole Foods, these bars, which boast natural ingredients and lots of protein, are poised to take the channel by storm.

And interest isn’t expected to wane. Analysts at Technavio, a London-based market research company, say the global meat-snack category will grow at a compound annual rate of 8.79% from 2016 through 2020.

The persistence of protein. It is indeed consumers’ demand for more protein that is driving both meat-snack and yogurt sales, and research indicates the trend may be becoming a way of life. The International Food Information Council’s 2016 survey shows 64% of consumers are trying to eat more protein—up 10 percentage points from 2015.

A new offshoot of the protein craze, hummus, is everywhere. One company, Flamous, has even launched a line of chips containing chickpeas and spices that are specifically designed to be consumed with hummus.

At Stinker Stores, protein’s on fire, but it’s in the beverage category as opposed to snacks, where “demand for it continues to grow every year,” says Audet.

But the king of protein remains meat snacks, and consumers are more likely to look for high-protein claims on meat snacks (33% look for them there) than any other salty snack, according to Mintel.

“Consumers are seeing [meat] as one of the best sources of protein and can’t be substituted, when you come down to it,” says Powell of Q1. There are opportunities in this category, he says, “with existing products, such as flavors, cuts of meat and types of portions (sticks, bites, nuggets).”

Meat snacks are still popular at VERC Enterprises, especially if they’re not the standard meats and flavors. Spicy varieties do well, “but we’re finding people are interested in new and interesting types with a hint of a flavoring like pineapple or ginger,” says Bettencourt.

The big brands are the hot ticket here—Jack Link’s, Krave and Slim Jim—and it’s the single sticks that outpace bags.

The 3.25-ounce bags of jerky are the best meat-snack sellers at Stinker Stores, and they’re merchandised on a rack at the front end of stores or right by the cash register.

“What grows this category is innovation,” Audet says, and new flavors such as bacon and Sriracha are keeping it strong.

Fruit. There’s a health halo around fruit that nothing can budge, and for this reason, fruit and vegetable snacks are popular both in their natural state and in manufacturer products.

Family Express is also encouraging fruit consumption among kids at its 65 stores through a Free Fruit for Kids program, launched in July. The program entitles children under 12 to a free banana, pear or apple at no charge.

“We are committed to providing healthy alternatives to our customers,” the Valparaiso, Ind.-based company says on its website. CEO Gus Olympidis said he sees the program as an opportunity to get kids “addicted” to fresh, healthy foods.

And thus, another generation is poised to change the snacking paradigm.