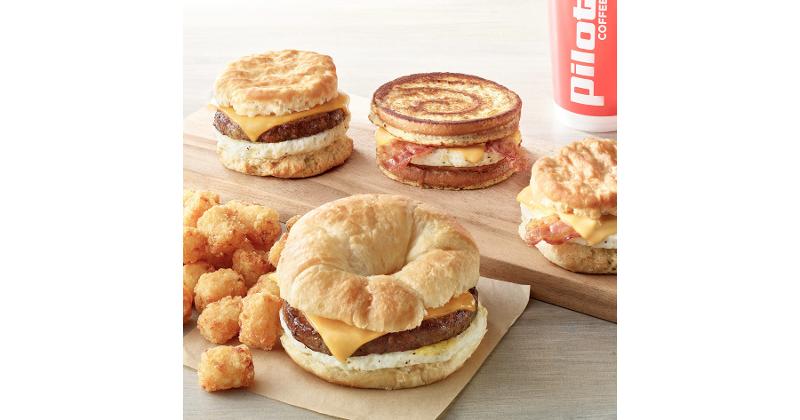 KNOXVILLE, Tenn. — Biscuit, croissant or French toast? Those are the options for Pilot Flying J’s four new breakfast sandwiches now on its menu.

Available at more than 300 participating travel centers across the country, Pilot Flying J's newest creations are chef-approved and made in-house daily for an on-the-go breakfast. During the pandemic, consumers have been eating more breakfast foods than in normal times; however, the breakfast business at convenience stores has been hit hard because of disrupted schedules.

Pilot Flying J offers freshly made breakfast with more than 10 options on its morning menu. Its newest breakfast sandwiches are prepared with fresh eggs, rich natural cheeses and a selection of Tennessee-made Goolsby Sausage patty or Tyson bacon.

"Our guests asked for even better breakfast, and we took the challenge by introducing four new breakfast sandwiches that give an extra satisfying start to the day," said Shannon Johnson, senior executive chef for Pilot Flying J. "When you're on the road, a fresh meal made with quality ingredients is all the fuel you need to reach your destination. With these new additions to our unexpectedly awesome menu, there's no debate that our breakfast is worth stopping for."

The four new sandwiches are:

Based in Knoxville, Tenn., Pilot Co. is the largest network of travel centers in North America, and it has grown to more than 1,000 retail and fueling locations. Its Pilot Flying J Travel Center network includes more than 750 locations in 44 states and six Canadian provinces.

Making LTOs Pay Off at Breakfast