Thermal printers were first introduced in the early 1970s, and since then, they have revolutionized food service printing—especially when it comes to printing labels on grab-and-go food offerings. How they work is a bit complicated, but the benefits they have brought to the food service industry include faster, quieter printing that tends to be more efficient and less energy intensive than traditional printers. 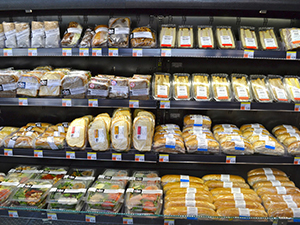 However, they do have some drawbacks. For one, they often have a higher initial cost compared to traditional printers. Additionally, some food service professionals find that their thermal printers have two homes: one in their kitchen and the other in the repair shop.

Jill Carte, category manager of food safety at DayMark Safety Systems, an industry-leading provider ofgrab-and-go food-labeling terminals, offers five suggestions on how to keep thermal printers in the kitchen and out of the repair shop.

1. Mess with it…carefully. Many food service professionals say they are too busy cooking to be cleaning and maintaining their thermal printers.  Carte says, “To keep it working at its best, don’t ignore the printer; mess with it. Clean it after changing rolls. Use a paintbrush to remove dust, paper, and food debris. And check that the print head and the roller are clean whenever installing a new ribbon.”

2. Don’t throw anything away. When unpacking some thermal printers, users often find several “mysterious” components in the packaging materials. Never throw any of these away, Carte says. “It can be hard to get individual parts for a thermal printer and if they are included in the box, just assume they are needed somewhere or at some time for the system to work properly.”

4. No poking. It seems like common sense, but one of the main reasons thermal printers end up in the repair shop is that users have used sharp instruments to remove objects stuck in the machine. “What can happen is they accidentally cut or nick key components, leaving holes and splits. Before ‘operating’ on your thermal printer, call a technician and ask them how to handle any problems.”

5. Focus on the platform. DayMark’s new Matt85™ direct thermal printer, part of their new Gateway system, reduces dependence on hardware in favor of an emphasis on the company’s MenuCommand™ web portal and MenuPilot™ app. “The Matt85 printers do not have premium pricing and they are designed to be more dependable and reliable than comparable systems in the marketplace” says Carte.