DALLAS -- It's halftime for 7-Election, 7-Eleven's presidential coffee cup poll. While President Barack Obama has maintained a steady 20-point lead over Republican challenger Mitt Romney through the first four weeks of polling, three of the nine swing states have shown movement after last Wednesday's debate. And Romney cup sales in some areas apparently perked up. 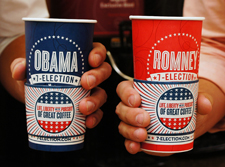 For the week leading up to the debate, Obama led Romney in 7-Election cup sales, 63 to 37 nationally. Counts on October 4, however, were closer with Obama's lead shrinking to 57% over Romney's 43%.

In Denver, where the debate took place, the numbers were even tighter before and after. Leading up to the debate, Obama's lead averaged 16 points, 58% to Romney's 42%. The following day, the candidates were nearly tied--Obama 51%,and Romney 49%.

"This is the fourth 7-Election, and we go into it every time not knowing if our results will reflect the actual outcome," said Nancy Smith, 7-Eleven vice president for marketing. "But history, so far, speaks for itself, and 7-Eleven seems to have the pulse, maybe a bit more rapid, of the nation. There's still another month before Election Day, and we invite people to come to 7-Eleven and support their candidate by getting a red or blue 7-Election cup and, even more important, to take advantage of their privilege to vote in the real election on November 6."

Through October 10, approximately 60% of customers had cast their blue cups for Obama while 40% picked the red Romney cup. 7-Eleven began counting red and blue cups September 6. Of the 34 states in which 7-Eleven has stores, the president carries 31 while Romney leads in three (Idaho, West Virginia and New Hampshire).

Cup counts for Obama dropped slightly in three states the day after the first debate on October 3, with the president losing a percentage point to Romney in Iowa, New Hampshire and Wisconsin.

Even more telling were the results in Denver 7-Eleven stores last Thursday, the day after the first presidential debate and the city where the event took place. Obama had led 58% to 42% of 7-Election cups sold up through the day of the debate. The day after the debate, the president slipped 7 percentage points to 51% versus Romney whose cup share grew to 49%.

As the U.S. presidential election swings into the final weeks and early voting begins across the country, Americans are encouraged to continue to cast their cups in the 7-Election just-for-fun presidential coffee cup poll at participating7-Eleven stores.

Throughout the first half of the 60-day voting promotion, the margin between the two candidates has mirrored the 2008 presidential election when Obama bested Sen. John McCain.

7-Election percentages do not include the sale of the green-colored, large-size 7-Eleven coffee cups for the "No-Opinion/Another-Party/Undecided/None-of-Your-Business" consumers or the other sizes of 7-Eleven's hot beverage containers.

"7-Election has never been a scientific study, so it's anybody's guess why the spread between the cup counts is greater than national polls, you know, the real ones," Smith said. "7-Eleven customers are younger than the general population, and some news sources have suggested that younger voters, who communicate primarily by wireless phones rather than landlines, may be undercounted by pollsters."

The 7-Election coffee cup poll will continue its count until midnight on Election Day, so the cup race is not over until the last drop that Tuesday night.

7-Eleven's Mobile Oval vehicle continues its rolling tour. The red, white and blue bus with a miniature oval office inside was in the U.S. Capitol this weekend before this week traveling down the East Coast to Norfolk, Va. (October 11); Jacksonville, Fla. (October 14); Orlando (October 15), Miami (October 16) and Tampa (October 17). The bus then moves on to Austin (October 19) and other points west. Dates for future Mobile Oval stops in Colorado, Nevada, California, Washington state are posted on www.7-election.com. The Mobile Oval returns to 7-Eleven's hometown of Dallas the day before the election. Visitors get a fun non-political experience with free coffee, free mugs and free photos in the mini-oval office.

Election 2012: It’s Not Just for President