DALLAS -- Convenience retailer 7-Eleven Inc. has the fourth-largest share of hot-brewed coffee servings in the United States, trailing behind three other household names, according to 2012 yearend data from StudyLogic. 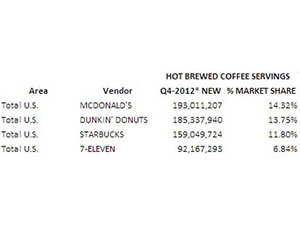 Dallas-based 7-Eleven owns 6.84% of the coffee market in the U.S. with 92.2 million servings reported in the fourth quarter of 2012, according to StudyLogic.

A 7-Eleven spokesperson would not confirm the data and declined comment on the report.

The order remains the same when viewed by coffee dollar sales, though 7-Eleven’s $156.7 million in sales in the fourth quarter earned it a slightly larger 7.90% share of the market.

7-Eleven coffee is sold in four sizes and a variety of flavors, from 100% Colombian to blueberry to butter toffee, according to its website. In January, the convenience store retailer introduced a Brazilian dark roast, the retailer's "richest, most full-bodied coffee to date," with a month-long $1 Coffee Wednesdays promotion.

Cedarhurst, N.Y.-based StudyLogic is a market-data provider for the foodservice industry specializing in tracking and providing total U.S. and local market data.