DALLAS -- To build business around dispensed beverages, a retailer can’t just go with the flow. So agreed a panel of convenience-store retailers attending CSP’s Convenience Retailing University. The retailers at a roundtable sponsored by Whirley-DrinkWorks! discussed current challenges and opportunities to not only improve drink sales but to use their beverage program to drive store business. 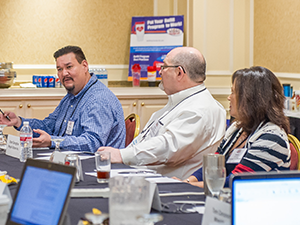 Joey Hobson, executive director of category management at Maverik Inc., which has 270 convenience stores in Utah, Idaho, Wyoming and neighboring states, pointed out a unique challenge his brand faces. In Utah, the Mormon population doesn’t drink coffee, but they don’t eschew caffeine. For many, that means fountain soda. Maverik is encountering a new set of competitors in the market that offer full-service made-for-me soda shops.

“There’s a share shift toward high-end fountain mixology,” Hobson said, naming brands such as Fizz, Swig and Sodalicious that offer customizable soda beverages for up to $5 a piece and often have drive-thrus. “People are looking for an indulgence.”

He said customers like to carry the cups, showing the brand as a badge of honor, and that moms in particular like the convenience of the drive-thru. Maverik serves more fountain beverages than coffee, and it does offer flavored syrups and limes to add an element of mixology. “But I can’t charge for it,” he added. The chain is considering offering a behind-the-counter drink program of its own.

Lone Star Food Stores faces a similar challenge with coffee. Diane McCarty, CEO of parent company Douglass Distributing Retail Co., said that some of its 22 convenience stores compete head to head with Starbucks. “We’re right next to a Starbucks at our largest store and the line comes in front of our store,” she said. McCarty believes there is a portion of those customers who would rather not wait in line and would appreciate a lower-priced cup of coffee. “We have some innovative toppings like whip creams, drizzles and mini marshmallows,” she said, and store sales do see a small lift when they are added.

Weigel’s Stores, which has about 60 stores in Tennessee, upgraded its coffee program, moving to organic coffee, redesigned the self-service area and improved branding. “We use the quality as a differentiator,” said Brian Donoghue, director of foodservice. In fact, the company has chosen not to discount the coffee, even when a nearby fast-food chain or c-store competitor offers a lower price or limited-time promotion. “We found it’s not very profitable, and it’s not very good for business,” he said.

The effort in part is meant to attract millennials, who tend to appreciate the story behind organic. Donoghue said they also like to cluster together and to look over their shoulder to see how their friend is customizing their drink. “Did we allocate enough space for that, to allow that shopping experience to happen for them?” the team asked during development. “You need to be cognizant of that.”

Marketing the Beverages and the Brand

One of the upgrades that Mapco focuses on concerns its refillable cups. The Delek U.S. Holdings Inc. brand, which has about 350 stores, introduces new refillable cups seasonally, to create a desire to have the latest cup. “It resets the program with the guest,” said Jeramy Ouart, director of food and beverage innovation.

Mapco is currently focusing on fountain beverages to kick off its summer promotion, and when the colder months hit, it will come out with a new hot beverage cup. Mapco wants to drive incremental trips to the store, hoping for an additional foodservice purchase. Ouart also points to the marketing value. “We invest more than others on branding on the cup, even on the disposable,” he said. “It goes into the marketplace. It’s a sharp looking cup.”

Weigel’s Donoghue described a promotion in which competitors’ cups and mugs were swapped out with a Weigel’s mug for free. They even had a promotion that would reward the manager whose store collected the most cups. It took a while to recapture the lost sales, but Donoghue argued that it was worth it: “I’m trying to build habit. That’s the objective.”

All of the retailers at the session offer loyalty programs, and they debated the pros and cons of electronic vs. physical punch cards.

Robert Wolf, food operations manager at Bosselman Pump & Pantry, which has about 50 stores throughout Nebraska, said that the physical punch card is a pain, but redemption rate is higher in an electric format. Pump & Pantry opted to go with a hard card or phone lookup, so the customer has to make the choice and be reminded that they’re getting something. “When the redemption comes back, it’s like, ‘Yeah! Awesome!’ It’s like winning the lottery, only they win after every nine drinks,” Wolf said.

The chain asked their customers—many of them farmers and other rural workers who may not have computers at home—to sign up for the loyalty program in the store. To entice them, Pump & Pantry offered a free pop or coffee, which was found to be most effective. “That’s when you start capturing the data,” Wolf said. “What are their shopping habits? Are they only buying dispensed beverages, or what? Until you penetrate that data, you don’t know.” The company started pairing drinks with food items in loyalty promotions, and watched some of those paired items—breakfast burritos—get a sales boost that lasted beyond the promotion.

A larger basket, customer loyalty, brand building—all in all, the roundtable uncovered methods to boost business beyond selling more beverages.