With hectic schedules and days spent on-the-go, hungry consumers are looking toward foodservice at local convenience stores to satisfy their picky palates and growling stomachs. Like supermarkets and fast casual chains, c-stores must make sure they’re catering to consumers’ changing tastes and food expectations. 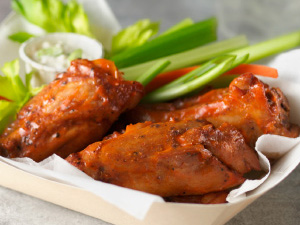 When it comes to meals, protein is still king. Following the trend of recent years, chicken is now the main attraction as other kinds of meat play more supporting roles. In fact, according to Technomic’s 2017 Center of the Plate: Poultry report, 91% of consumers eat chicken at least once a week and 88% of consumers say they think that chicken is healthier than beef or pork.

In 2012, chicken surpassed beef as America’s favorite protein, and there’s plenty of data that shows that the shift towards chicken will continue. Datassential found that 33% of U.S. consumers are looking to decrease their consumption of beef and pork, and nearly 25% of consumers intend to eat more poultry.

“Chicken tops the list of protein being consumed most often per week,” Tom Super, Senior Vice President of Communications at the National Chicken Council, said as part of a recent report. “And while retail sales continue to be strong, the survey shows that more people are eating chicken away from home, which is good news for chicken producers, foodservice establishments and the overall economy.”

Here are a couple ways chickens are crossing the foodservice road into the c-store sector:

Burgers are a mainstay of diets in the U.S.—according to the 2015 Datassential report, “Burger Keynote,” 75% of Americans say they eat a burger at least once a week. But it’s no longer the day of the beefy, double patty Big Mac. In fact, chicken burger menu mentions have risen 23% since 2014, according to the 2015 Food Business News article “Alternative Burgers Booming on Menus.” And while more chicken burgers are being offered, 46% of U.S. consumers—and 58% of millennials—would like to see even more chicken patties served between buns, according to Technomic’s 2017 Center of the Plate: Poultry report.

Brakebush is on top of that consumer trend with its their new Flame-Grilled Chicken Burger. This fully cooked burger is made with just chicken and seasonings. It has no added water or binders, offering the same satisfying and flavorful meal as a hamburger, but with less fat. Additionally, Brakebush’s Thigh BoneZ™, chicken cut to eat like a rib, offers consumers an alternative to fatty beef or pork ribs. Best of all, they’re perfect served any way ribs or chicken are served – baked, fried, grilled or pan seared, as well as glazed or tossed in your favorite sauce

According to Technomic’s 2017 Center of the Plate: Poultry report, 48% of consumers say they would be interested in trying chicken entrees with new or unique flavors. Consider Chicken Sausage Topping, another new product from Brakebush. Operators can use the fully cooked, all natural, Italian-seasoned chicken sausage with pizzas, soups and more as a way of adding flavor as well as lean protein. Such products can add variety and versatility, proving there’s more to chicken at c-stores than the chicken tender.

For retailers looking to add to their chicken foodservice repertoire, consider offering it as a versatile and tasty pork or beef alternative. In hamburgers, sandwiches, wraps and more chicken is great as a main protein, and offers a better-for-you option as an ingredient for pizza, salads and so much more.