SPRINGFIELD, Ore. -- As part of an effort to offer healthy food at convenience stores in three neighborhoods in the Eugene-Springfield, Ore., area where nutritious, affordable groceries are hard to find, Jack Richardson of McKenzie River Organic Farm is bringing organic produce to a Dari Mart c-store parking lot in Springfield in a mobile produce stand, reported The Register-Guard.

In what is known as the Healthy Corner Stores Initiative, local health organizations are trying to convince c-store owners to carry fresh produce and wholesome snacks as alternatives [image-nocss] to less-nutritious food, according to the report.

This local version of that project--spearheaded by the Lane Coalition for Healthy Active Youth--is one of just a few nationwide that involves a chain of stores, the report said. Dari Mart has 44 locations in Oregon. And it is believed to be the only one that involves a mobile produce stand, Kayla Schott-Bresler, who is coordinating the project for the coalition, told the newspaper.

Richardson rebuilt a 1949 GMC pickup that has a flatbed on which he carries a load of salad greens, cucumbers, squash and whatever else is in season at his family's farm.

He first visited the Dari Mart on June 22, said the report, and about 80 customers purchased fruit and vegetables from his mobile stand during the two-hour stop, Schott-Bresler said. Richardson plans to continue parking outside the store on Wednesday afternoons through September.

Schott-Bresler said her organization is now working with Dari Mart to bring a menu of healthy groceries into its stores in two other neighborhoods, chosen for the project based on age and income demographics, input from Dari Mart officials and proximity to supermarkets.

Also, Schott-Bresler said her group spoke with customers of the Dari Mart earlier this year. Most of those people indicated they would buy produce at the c-store if they could. She said many people in the neighborhood reported that they regularly shop at a traditional grocery store once every few weeks, and visit Dari Mart whenever they find themselves in a food pinch. For some, that means buying a bag of chips or a candy bar instead of something more nutritious, said the report.

The project is being funded through a $180,000, three-year grant from the Northwest Health Foundation and a $21,210 grant from the Spirit Mountain Community Fund, said the Register-Guard.

Meanwhile, at a location in San Francisco's Bayview community, Walgreens now offers a larger assortment of fresh fruits, vegetables, whole grains, beans, lean protein and other healthy meal components to help address the need for greater access to affordable, nutritious food in this community. The neighborhood, identified as a food desert, has long lacked options for foods necessary to maintain a healthy diet.

The store is Walgreens first location in the Bay area to undergo a redesign to accommodate the expanded food selection, called a "food oasis." The new layout includes approximately 500 additional square feet of space dedicated to food items, an offering believed to be unprecedented in the city from a traditional retail drugstore.

In addition to its Bayview location, Walgreens plans to have its expanded food selection available in food deserts in Oakland and Berkeley by the fall. The drugstore chain launched its Food Oasis initiative in Chicago last summer with 11 stores across the city's south and west sides. Walgreens continues to review opportunities to bring the expanded offering to other food desert areas across the country.

"The response to this new offering in Chicago has been strong, and we are looking forward to having the same positive impact in more communities," said Bill Hose, Walgreens market vice president for northern California. "No other retailer has more locations in America's underserved neighborhoods. That makes us well positioned to play a larger role in addressing this important health need."

Deerfield, Ill.-based Walgreens is the nation's largest drugstore chain with fiscal 2010 sales of $67 billion. The company operates 7,733 drugstores in all 50 states, the District of Columbia and Puerto Rico.

(Click here for previous CSP Daily News coverage of food deserts. And for more on the battle against food deserts, see the June issue of CSP magazine.) 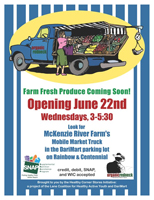