OAK BROOK, Ill. -- McDonald's is introducing some higher-priced options to its Dollar Menu and renaming it "Dollar Menu and More" to spur sales in the United States, according to a Newsday report. 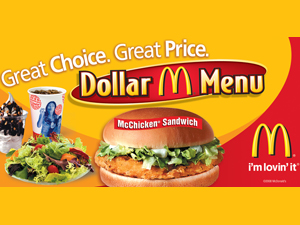 The company announced the changes to its popular low-priced menu Monday, the same day that the world's biggest burger chain reported that its third-quarter profit rose 5% as it benefited from a Monopoly promotion in the United States and strength in the United Kingdom and Russia.

The company plans to introduce some $2 and $5 options on the Dollar Menu, which features things like the Grilled Onion Cheddar Burger and a McChicken sandwich for a buck. The new "Dollar Menu and More" will include items including $2 burgers and a $5 20-piece chicken McNuggets.

The menu tweaks come as McDonald's tries to regain its footing. After outperforming rivals for years, McDonald's has struggled recently as it faces heightened competition, shifting eating habits and tough economic conditions around the world, according to the report. Late last year its monthly sales at stores open at least a year fell for the first time in nearly a decade.

To boost sales, the company has been taking a two-pronged approach. On the one end, it's playing up its Dollar Menu and other affordable options to draw in customers who may be watching their spending more carefully. The strategy has forced rivals Burger King and Wendy's to more aggressively push deals and promotions as well.

On the other end, McDonald's also is trying to adjust its image and menu to better reflect healthier eating habits. In the United States, for example, the company recently rolled out chicken wraps and the option to substitute egg whites in any of its breakfast sandwiches. Early next year, it said, it will start giving customers the option to pick a salad instead of fries with their value meals.

Healthier Menu Yet to Pay off for McDonald’s