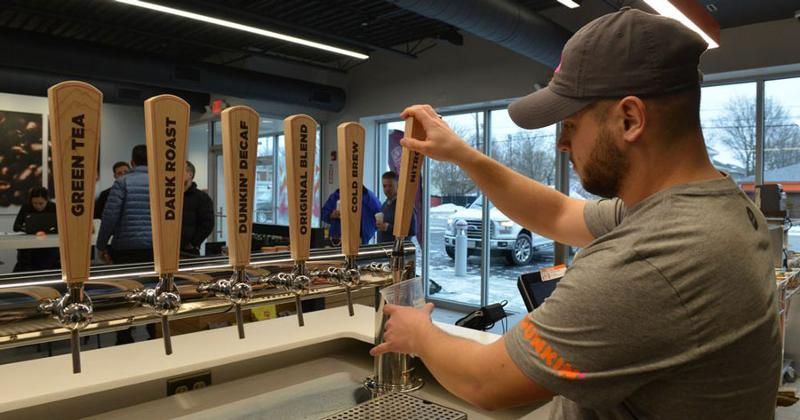 CANTON, Mass. -- The Dunkin’ coffee-and-doughnuts chain is backing away from self-service units and other scaled-down formats for nontraditional locations as part of a shift in growth strategy. As the quick-service chain positions itself as a leader in dispensed beverages, the move might signal fewer partnerships with convenience stores and travel centers.

“While nontraditional sites will continue to play an important strategic role for Dunkin’, we are going to be more selective in the types of units we pursue,” said Dave Hoffmann, president of Dunkin’s U.S. operations and CEO of its parent company, Dunkin’ Brands.

He said the chain closed more than the usual number of Dunkin’ units during 2018 and planned to increase the number this year. Hoffmann indicated that not all of the shuttered stores will be in nontraditional locations, but he identified those sorts of units as key targets because they “don’t provide the full Dunkin’ experience.”

Dunkin’ has been a leader in locating stores in unconventional locations, from travel sites to college and universities, hospitals and sports arenas. In 2017, Dunkin’ added 86 nontraditional locations, including 12 units inside rest stops and travel centers. Many of the locations consist of little more than racks or enclosed cases of doughnuts showcased inside gas stations and c-stores.

Although quick access is an underpinning of the repositioning Dunkin’ announced last year, the effort also calls for an upgrade in service and decor. The doughnut chain’s new next-generation prototype features glass-fronted merchandising displays, a barlike seven-tap dispensing system for cold coffees and an area showcasing snacks and other grab-and-go items.

As part of that recast into what Hoffmann has characterized as a “beverage-led on-the-go brand,” the chain is dropping Donuts from its name to become just Dunkin’.

The repositioning also calls for a shift in development emphasis from quantity to quality, Hoffmann said. Yet he also boasted that the chain grew domestically in 2018 by a net gain of 278 restaurants, 90% of them outside the brand’s core New England market. About 130 sported the new next-generation design, or double the target number set by the franchisor.

Few nontraditional locations feature a cornerstone of the upgraded Dunkin’ concept, the espresso machine that was rolled into most domestic stores during fourth-quarter 2018.  Hoffmann described the retrofit and espresso upgrade as “the biggest product relaunch in our recent brand history.”

Because of the scale and tight scheduling of the installations, Dunkin’ eased back on its marketing during the fourth quarter, fearing a sales spike would further tax unit staffs, according to Hoffmann. He cited that decision as the reason for Dunkin’s flat same-store sales for the fourth quarter.

Dunkin': Time to Drop the 'Donuts'

3 Ideas C-Stores Can Steal From the New Dunkin' Format