From Japanese to Chinese and Korean to Thai, Asian foods and flavors—specific to their country and region—continue to trend among U.S. menus. With more consumers clamoring for ethnic-inspired dishes (two-thirds to be exact, according to Technomic), convenience stores have the same ample opportunity as fast casuals and other restaurants to bump up their foodservice offerings, excite young and new customers and, as a result, bring in more profits. 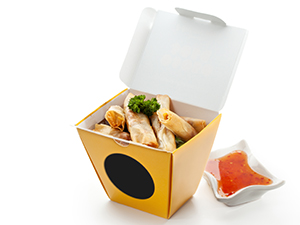 Specifically, Southeast Asian flavors continue to trend, according to the National Restaurant Association’s (NRA) 2016 What’s Hot chef survey. And, according to research firm Datassential, interest in Asian cuisine beyond the better-known Japanese and Chinese flavors continues to grow, with more menu incidents around Vietnamese and Korean dishes and flavors. Korean kimchi and bulgogi and Vietnamese banh mi sandwiches and pho are all experiencing growth, the research firm reported.

When it comes to other trending Asian foods, restaurants and other operators are focusing on specific regional favorites, as well as fusing Asian flavors and ingredients with more mainstream American and Mexican favorites, such as tacos.

First popularized by street-food vendors such as Kogi BBQ, Asian fusion tacos (think spicy pork with kimchi in a taco) continue to pop up at food trucks and fast casuals nationwide.

According to NRA’s What’s Hot survey, ethnic-inspired breakfast items, such as those incorporating Asian-flavored Syrups and condiments continue to trend as a whole, up 68% in trending marks since last year.

Trending points of Asian noodles, such as soba, udon and ramen, decreased by 6% (to 45%), but NRA said this could be due to these dishes becoming more of a mainstream, perennial favorite, chiefly among fast casuals and other quick-serve outlets.

As of late, dumplings—Asian and beyond—are winning the popularity contest, according to Technomic, as restaurants and chefs attempt to elevate what was once considered ethnic “peasant fare.” Chinese-style bao (buns) stuffed with pork, chicken and other proteins and garnished with spicy Sriracha and other Asian condiments and sauces have also exploded in popularity as the new Asian “taco” or mini sandwich of sorts, offering c-stores an opportunity to satisfy consumers’ growing cravings for ethnic foods but also portability.

And egg rolls, forever an Asian favorite food, continue to remain popular. In fact, 63% of consumers say egg rolls are their No. 1 favorite snack, according to Technomic, and with three out of four consumers purchasing Asian-style fare at convenience stores at least once a month, it makes sense for c-stores to offer these tasty, portable treats. Egg rolls also make room for new, Asian-style dipping sauces as value-added flavors. The fastest growing flavors, according to Technomic’s 2016 MenuMonitor study, are lobster-ginger (+43%), sriracha (+35%), soy-sesame (+22%) dragon (+17%) and miso (+5%).

Ample opportunities exist for c-stores to bump up their menus or topping bars with more Asian-inspired flavors and add-ins.

Togarashi, the Japanese chili pepper, has exploded in popularity, up more than 200% in menu mentions over the past four years, according to Datassential. It’s a flavor that continues to grow each year as operators beyond Asian cuisines use it to add flavor to any number of dishes, but especially vegetable appetizers and sides.

Japanese matcha, a finely ground powder of specialty green tea, has also grown in menu mentions in the past year (57%), according to Datassential. The highly concentrated and nutritious tea powder is often used for beverages, but also in desserts and, to a lesser degree, breakfast items such as granola and oatmeal.

Sriracha continues to grow with a 37% increase in menu mentions nationwide, according to Datassential. The condiment also has been incorporated into mayo (with an increase of 30% in menu incidents in the past year) and aioli (up 49% in the past year) to introduce the flavor to an even broader audience.

According to Technomic, this condiment has even gone mainstream as a spicier replacement for ketchup on burgers or as a garnish to give those ever-popular Asian-fusion tacos a little kick.

This “Sriracha effect,” as the research firm calls it, has led to chefs and food developers scouting the world for other assertive flavorings and condiments to bring new life to more American dishes, as well as mainstream Asian favorites such as pot stickers and egg rolls.

Technomic and other trends experts point to gochujang, the Asian chili sauce made from fermented soybeans, dried chilies and garlic, as the next Sriracha, and suitable as a topper for burgers and dipping sauces for other Asian and non-Asian appetizers and snacks.

And Southeast Asian sambal, a hot sauce made with chili peppers and often shrimp paste, fish sauce, garlic, ginger, shallot and other aromatics, is growing in popularity among chefs in the United States and others experimenting with ethnic flavors.

While some of these items are more accessible than others, they all share one common trait: Consumers love them. Fast casuals and other restaurants have already capitalized on this; now, c-stores have the opportunity.