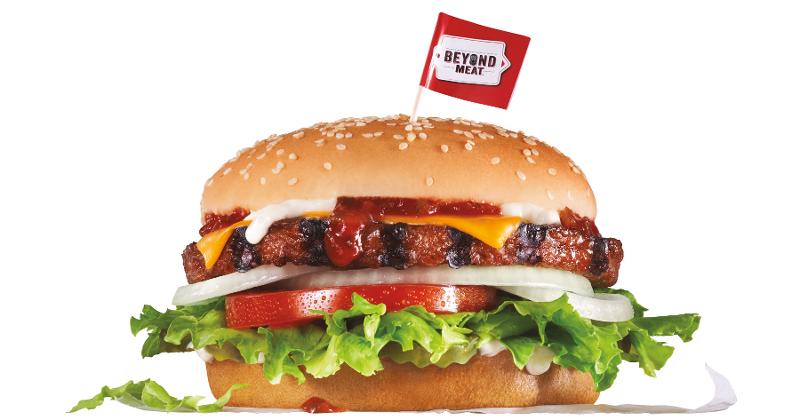 CHICAGO — White Castle rocked the foodservice world when it introduced Impossible Sliders, using Impossible Foods’ plant-based meat, in September 2018. The meat-free patties are made from soy protein, potato protein, coconut oil and sunflower oil. They have the scent and sizzle of beef but a relatively healthier nutrition profile. A month after White Castle launched its sliders, Burger King followed suit with its Impossible Whopper.

And now convenience stores are serving up plant-based burgers, and they can thank restaurants for the free exposure.

“QSRs that promoted plant-based burgers early on have given us free marketing,” said Ryan Krebs, director of foodservice for Rutter’s, York, Pa., which added a plant-based burger to its menu this fall. “Burger King’s commercials told my customer what plant-based is.”

The global meat-substitute industry garnered more than $4.5 billion in 2018 and is expected to hit $8 billion by 2026, according to Allied Market Research, Portland, Ore. Feeding the growth is a consumer base hungry for these options: Nearly a quarter (23%) of all consumers and 29% of millennials said they would consider ordering plant-based burgers at a foodservice establishment, according to CSP’s sister data firm, Technomic Inc., Chicago.

“You don’t need to re-create the wheel to be in the plant-based business.”

Plant-based meat companies such as Impossible Foods aren’t necessarily targeting vegans or vegetarians; instead, the target customer is a meat eater looking to reduce meat consumption or eat healthier. Offering plant-based meat can give c-stores an extra boost as they pursue a premium, made-to-order foodservice program to compete with restaurants and grocery.

“Many convenience operators are gun-shy to go plant-based because we’re in an industry that mainly serves meat protein,” Krebs said. “They’re convinced it’s not for our consumer base, but we believe now is the perfect time to give customers these options.”

Rutter’s introduced the Perfect Burger, manufactured by Dr. Praeger’s, Elmwood Park, N.J., in all 72 of its stores in October. The Perfect Burger is made with four kinds of vegetables: sweet potato, butternut squash, beet and carrot. It is available via Rutter’s hot grab-and-go menu and restaurant touchscreen kiosks for $3.59, and for $4.39 with cheese. Rutter’s chose the Perfect Burger because it is vegan, high in protein, free of soy, and lower in cholesterol and sodium compared to other plant-based meat brands, Krebs said. The chain hopes the plant-based burger will appeal to consumers seeking sustainable meat alternatives.

“People having careful ways of eating and caring for the environment is foundational in food,” Krebs said. “The global acceptance of [plant-based meats] is incredible.”

GetGo Cafe and Market, a division of Pittsburgh-based Giant Eagle, introduced the Impossible Burger at six Pittsburgh-area stores in October.

“Our chef, Thomas Seaman, keeps a pulse on what our customers are looking for,” said Jannah Jablonowski, public relations specialist for Giant Eagle. “He noticed a spiked interested in meat substitutions and plant-based options, so we went for it.”

GetGo offers the Impossible Burger with cheese, mushrooms and its GoGo sauce, a revised version of Yum Yum Sauce found at hibachi restaurants. The key is to differentiate its burger from those of competitors, Jablonowski said.

“Because the burger is available at other locations, we want to dress it up and make it unique,” she said. “We want to give consumers more reasons to try it besides price and convenience.”

Also in October, Minit Stop, a division of Hilo, Hawaii-based Hawaii Petroleum Inc., replaced all beef burgers on its menu with the Impossible Burger to promote sustainable eating.

“We first saw the Impossible Burger at the 2019 National Restaurant Association Show,” said Jon Miyabuchi, vice president of retail operations for Minit Stop. “After learning about its environmental and sustainable benefits, we thought, ‘Why not replace it?’ ”

Minit Stop follows the Hawaiian burger recipes of Miyabuchi’s mother to differentiate its Impossible Burger and offers it in multiple formats, priced between $7.49 and $12.99. They include:

“Our customers have been asking for the Impossible Burger by name almost since it debuted in 2016,” he said.

While plant-based burgers are an unusual item, the preparation process remains the same as any other food product. Both Rutter’s and GetGo bake plant-based burgers in a combi oven separately from traditional burgers because they cook faster—not necessarily to adhere to customers’ dietary restrictions or cross-contamination concerns.

“Every item has its own ingredient makeup and requires different cook times, whether it’s a breakfast flatbread or a breakfast burger,” Jablonowski said. “Because of the Impossible Burger’s unique ingredients, it needs to be cooked on its own.”

At Rutter’s, the plant-based burgers are cooked on clean sheet trays and at separate times from regular burgers.

“Our customers have been asking for the Impossible Burger by name.”

Fast-food restaurant Carl’s Jr. cooks both meat- and plant-based patties together on the grill, said Owen Klein, vice president of global culinary innovation for CKE Restaurants Inc., Franklin, Tenn., the parent company of Carl’s Jr. The chain offers two plant-based burgers made by Beyond Meat, El Segundo, Calif.: the Beyond Famous Star and the Beyond BBQ Cheeseburger, both for about $6. It is also testing another plant-based burger.

“We worked with Beyond Meat to create a version of their patty that ensured [the burgers] were able to be charbroiled,” Klein said.

GetGo has a two-part process for training employees when launching new items: teach staff how to cook it and explain the vision behind it. This is no different for the Impossible Burger, Jablonowski said.

“We’re going about the Impossible Burger as if it were one of our LTO sub sandwiches or any other item on the fresh, made-to-order menu,” she said.

Rutter’s has a similar process. The company sets aside a couple of weeks to teach kitchen staff the recipe, cooking technique and purpose behind new menu items, Krebs said. He and his team also sample the dish with customers before its official launch. This trial period allows the company to confront any questions or mishaps—such as tweaking a recipe or ingredient—accordingly. The Perfect Burger follows this procedure, he said.

“You don’t need to re-create the wheel to be in the plant-based business,” he said.

Launching plant-based meats can be challenging. GetGo struggles with educating its staff on the plant-based trend itself and effectively marketing these new items to customers, Jablonowski said.

To address education, GetGo discusses the hype around plant-based meats, such as health benefits and why consumers want to try it. “We make sure team members are well-versed to discuss the trend with customers and answer any questions they may have,” she said.

In its marketing, GetGo has one message: Although the burgers are made from plants, they taste like real meat. The company often uses words such as “juicy” and “sizzling” in its social-media campaigns for the Impossible Burger.

“We want to let consumers know what they can expect from the burger: that it’s made from plants but is made for meat lovers,” she said.

Rutter’s also grapples with educating its staff—mainly its front-line employees—on the Perfect Burger, Krebs said. Many of these associates don’t know what plant-based means, he said. Krebs and his kitchen staff train staff on what the plant-based trend is and why the burger is beneficial to Rutter’s business.

“We don’t dive into the microdetails of where each item is grown or how it’s farmed,” he said. “That’s too complex for now, but we’re open to doing so once the trend evolves.”

Finding the right plant-based meat product to sell can also be tricky for c-store retailers, Krebs said. Various plant-based items sometimes won’t perform up to expectations because their ingredients aren’t a fit for the retailer’s merchandising approach. For instance, plant-based hot dogs may die quickly on the roller grill because they lack the fat content to sit out all day. Knowing which types of products your equipment can handle is key, Krebs said.

“Every plant-based item must fit into the format and operations of the store,” he said.

Krebs believes the plant-based meat trend will remain a part of foodservice for the long term.

“Plant-based is not a trend—it’s here to stay,” he said. “There’s an entire generation buying into it.”