WASHINGTON -- New federal menu labeling regulations that many consider oppressive--and which pose an unreasonable burden on many businesses, particularly convenience stores--could be replaced with more targeted rules under legislation introduced in a news conference Tuesday by U.S. Representative John Carter (R-Texas). Representatives from the c-store, grocery and pizza industries, as well as other small-business owners, joined Carter, Rep. Henry Cuellar (D-Texas) and Rep. Ruben Hinojosa (D-Texas) as he introduced the Common Sense Nutrition Disclosure Act of 2012. 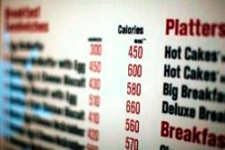 The Patient Protection & Affordable Care Act (PPACA), signed into law in March 2010, includes a provision that calls for a national, uniform nutrition-disclosure standard for foodservice establishments. Regulations implementing this provision, released in 2011, would create rigid requirements.

The regulations would require chain restaurants, "similar retail food establishments," and vending machines with 20 or more locations to provide specific nutritional information, including calorie-counts on menus, menu boards and drive-thru boards. Self-service items such as buffets and salad bars must contain caloric information "adjacent" to the item. Retailers would have to provide additional nutrition information in writing upon request.

The new legislation Carter has introduced codifies a less burdensome approach to menu labeling and includes language addressing the types of retail locations that are covered by federal menu-labeling requirements. Specifically, the legislation limits the provision in Section 4205 of PPACA to establishments that derive 50% or more of their revenue from food that is intended for immediate consumption or prepared and processed on site. Prepackaged food would not be considered in this equation.

The National Association of Convenience Stores (NACS) hailed Carter's legislation as a thoughtful approach to providing the necessary flexibility and understanding of c-store foodservice operations.

Given that last year 17% of convenience stores' in-store revenue dollars were derived from prepackaged food, according to NACS State of the Industry data, most c-stores would be exempt under the new legislation.

For those c-stores that would be covered by federal menu-labeling requirements, the Common Sense Nutrition Disclosure Act provides more flexibility with compliance. Retailers could select from several approaches in providing calorie information. For instance, pizza sellers could provide calories per slice or for the whole pizza. The legislation also would allow retailers more flexibility in providing calorie ranges as opposed to a specific number, which is often more difficult to define with made-to-order food.

"Convenience stores and their food offerings vary greatly--even those like mine that are part of the same chain--based largely on their location and customer base. This legislation provides retailers with the flexibility they need to communicate calorie nutrition information. More important, it sets realistic requirements for how businesses are classified under these regulations," said Miller, who served as the 2011 NACS chairman.

NACS has been actively engaged with the FDA during the regulatory process, ensuring that the agency understands the convenience store industry's unique perspective on federal nutrition disclosure obligations.

"This legislation would allow FDA to meet the objectives of the menu-labeling law without unnecessarily burdening retailers that rightfully should be outside of its scope," said Miller.

The Food Marketing Institute (FMI) also has endorsed the new legislation that it said will support Congress' original intent on federal restaurant menu labeling by ensuring that regulatory protocols intended for restaurants are not expanded to mainstream grocery stores, thus saving food retailers and their customers from unnecessary regulatory consequences costing in excess of $1 billion.