LOUISVILLE, Ky. -- New car designs are an acknowledgment that Americans like to eat while on the go. For example, one popular minivan seats seven, but has 17 cup holders. But while vehicle cup holders have become more prevalent, fast-food packaging has lagged behind. To address this, KFC Corp. has introduced the KFC Go Cup, featuring a patented, handy container that fits in a vehicle cup holder, which includes a choice of the brand's signature chicken along with seasoned potato wedges for $2.49 plus tax. 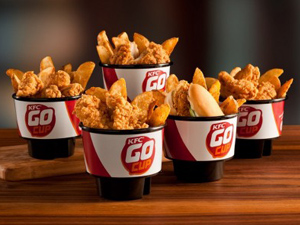 "Today's on-the-go snackers are going to love the Go Cup because it features awesome taste and great value, and in the ultimate portable package," said Jason Marker, chief marketing officer for KFC U.S.

The design of the package keeps the chicken and potato wedges separate by a divider, and the cup is sized to fit most cup holders. The Go Cup is designed to allow most of the food to sit above the rim of the cup, allowing easy access.

A recent KFC survey revealed that 53% of car owners age 18 to 32 would be more likely to eat in their cars if the food container would fit in a cup holder. And 35% of Americans describe themselves as "one-hander" eaters in the car, with one hand on their food while keeping the other hand on the steering wheel.

A KFC survey that asked "What's in your cupholder?" found that "a cup" is not the most common answer to this question. The top response was "change" (44%), followed by drinks (33%) and a phone or tech device (19%).

Also, KFC has launched the #GoCupGo Instagram photo contest. It encourages fans to submit photos of themselves "on the go" with their Go Cups. Every week for five weeks, five winners will receive gift checks and unique KFC items. Five grand prize winners will receive their choice of a Polaroid Z2300 camera or $250 worth of iPhone photography accessories, as well as being named "KFC Social Correspondents." For one year, KFC will follow the correspondents on Instagram, and their photos may be used in KFC digital advertising.

KFC, based in Louisville, Ky., is the world's most popular chicken restaurant chain, specializing in Original Recipe, Extra Crispy, Kentucky Grilled Chicken, Extra Crispy Tenders and Original Recipe Boneless, with home-style sides, Hot Wings, and freshly made chicken sandwiches. There are more than 17,000 KFC outlets in more than 115 countries and territories around the world. It is a subsidiary of Yum! Brands Inc., Louisville.