Slushes, slushies, Slurpee, FCBs and FUBs. Whatever you call them, these frozen beverages share a common trait: They’re a signature convenience-store item with lots of opportunities for flavor expansion. 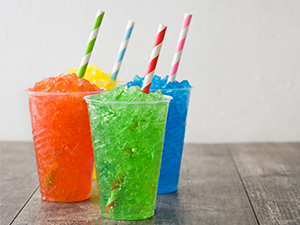 A majority (71%) of all convenience stores offer frozen dispensed beverages, according to NACS, and the category generates profit margins of 70% or higher, according to Technomic. On top of that, they often drive additional store purchases.

Canada in particular has been bursting at the slushie seams as of late, according to c-store consultant Nancy Caldorola. From new, innovative flavors to cool cups and more, c-stores up north have capitalized on the profit-producing potential of a wider variety of frozen beverages.

Slushies also attract younger audiences and the coveted female consumer, according to The NPD Group. Now, with newer dispenser equipment on the market producing better quality drinks with more ease of use and more innovative cups, c-stores have one area left to grow: flavors. Here’s a look at some burgeoning styles in Canada and here in the United States.

At Mac’s Convenience Stores in Canada, guests can customize their frosted beverages to combine a variety of flavors such as blackberry, lemonade and other seasonal and limited-time flavors.

In the quick-serve sector, Sonic has expanded its increasingly popular slushie selection, adding sprinkles and popping candy to some of its flavors, which include Blue Raspberry, Green Apple and Watermelon with Rainbow Candy; Green Apple with Jolly Ranchers, and Blue Coconut with Popping Candy. ICEE also recently introduced a new sprinkles product for its existing slushie lines.

Sonic has also jumped in the better-for-you and natural slushie arena with real fruit slushies using natural fruit such as strawberry and pineapple.

Up next is organic flavors, says Caldarola, although few if any c-stores have jumped on this bandwagon as of yet.

Some convenience stores are experimenting with shaved ice modeled after the popular Hawaiian treat of ice finely shaved through a blade. Not to be confused with snow cones, which feature a crunchier ice that forces the syrup to settle at the bottom, the shaved-ice method allows flavors to soak in the ice in a more concentrated way from top to bottom.

QuikTrip has expanded beyond its icy, flavor-infused Freezoni drinks to include a line of smoothies, including coffee-flavored options such as French Vanilla Cappuccino. Customers are encouraged to create their own recipe using any combination of frozen drinks, fountain flavors, syrups, creamers and whipped topping.

Wawa has even added Frozen Chai Tea to its repertoire of frozen, slushie-type drinks.

As all consumers—from frozen-beverage regulars to category newbies—look for more excitement in their food and beverage choices, offering trend-driven items in the slushie category can help boost sales in an already margin-rich area of the store.

This post is sponsored by Curtis Coffee and Specialty Beverage Equipment