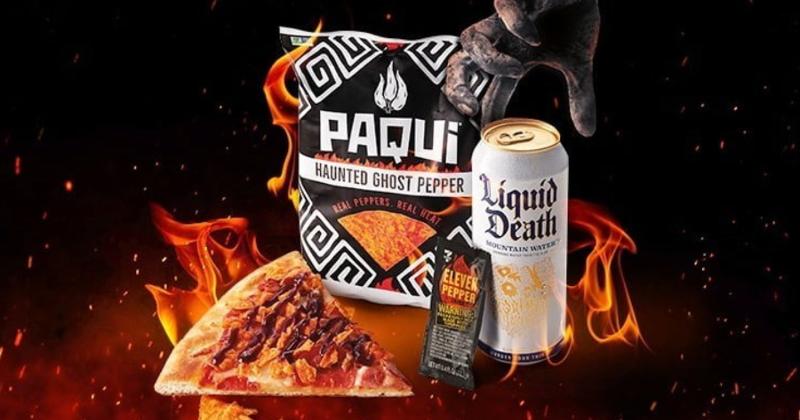 IRVING, Texas — What do you call it when a customer eats one slice of 7-Eleven pizza topped with 7-Eleven’s 11-Pepper Sauce and a 2-ounce bag of Paqui Haunted Ghost Pepper chips, and then washes it down with a can of Liquid Death Mountain Water?

7-Eleven calls it the One Slice Challenge, and it’s going on now through Oct. 31 or until supplies last.

To up the hoopla factor, 7-Eleven is asking customers to post photos or videos of their reactions (eating, drinking and sweating) to the #OneSliceChallenge on social media.

The reward for finishing what 7-Eleven said could be the hottest slice of pizza on Earth is bragging rights—and the chance to be featured on 7-Eleven social channels.

“We want to celebrate the risk takers and those who are always up for a challenge by giving them a fun way to make 7-Eleven part of their daily lives,” said Amber Langston, 7-Eleven product director of pizza. “And what better way to try our new 7-Meat Pizza and 11-Pepper sauce than to combine them and add a satisfying crunchy chip to the top?!”

Those game can buy the supplies they need for $3 with 7Rewards, the convenience store’s loyalty program. Customers also can customize the challenge with a choice of:

Based in Irving, Texas, 7-Eleven operates, franchises or licenses more than 77,000 stores in 18 countries and regions, including 16,000 in North America. In addition to 7-Eleven stores, 7-Eleven Inc. operates Speedway, Stripes, Laredo Taco Company and Raise the Roost Chicken and Biscuits locations.

Paqui One Chip Challenge Returns for a 5th Year