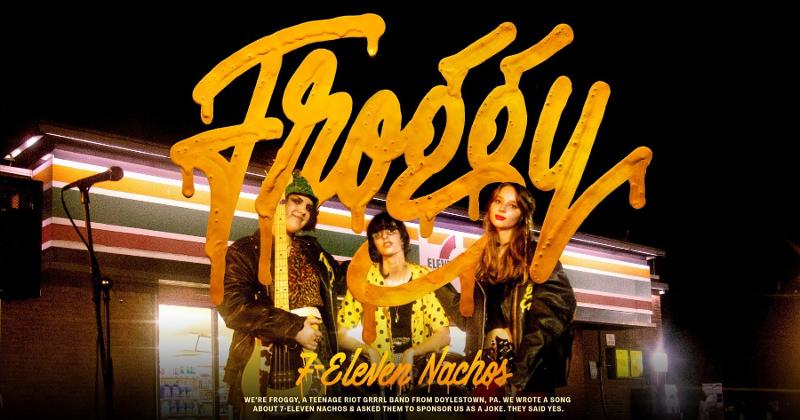 IRVING, Texas — 7-Eleven is touting its nachos through a promotion involving Froggy, the riot grrrl punk rock band out of Doylestown, Pa.

Bandmates Morgan, Brooke and Fiona caught the attention of 7-Eleven with the release of their song and smartphone-shot music video, “7-Eleven Nachos,” in January.

To applaud Froggy’s creativity and honor their love of nachos, 7-Eleven and Froggy collaborated on a professional music video of the song, all on the convenience retailer’s dime.

This isn’t a typical music video but, rather, quite cheesy, using 200 pounds of nacho cheese in the production. As an ode to the song’s original Instagram video, the video was shot at the band’s hometown Doylestown 7-Eleven store, with local customers and friends and family appearing as extras.

“Froggy’s song is over-the-top enthusiastic about their love for 7-Eleven nachos,” said Marissa Jarratt, 7-Eleven senior vice president and chief marketing officer. “It perfectly personifies our ‘Take it to Eleven’ campaign that celebrates the wild ways our customers make us a part of their daily lives. The music video is our thank you to Froggy for creatively celebrating something we both love.”

The video also celebrates the return of 7-Eleven’s new and improved nacho cheese, which brings back the traditional style and classic taste by popular demand, the company said.

“The song started for fun when we went to 7-Eleven one day to get nachos,” said Brooke, Froggy bass player and songwriter. “It’s so cool to see that the brand actually loved it and wanted to film a professional video with us in our hometown.”

Based in Irving, Texas, 7-Eleven Inc. operates, franchises or licenses more than 72,800 stores in 17 countries, including more than 13,000 in the United States under the 7-Eleven and Speedway banners.