Pizza Touch pizzas are priced at $6; the machine takes cash, cards or coins. Customers use a touchscreen to select and pay for any one of three pizza varieties—Margherita, Pepperoni and 4 Cheese, with mozzarella, gorgonzola, Edam and emmental cheeses.

Pizza Touch operates nearby service centers for its ATM-style modules, where logistics are in place to refill machines with pizza. Each Pizza Touch machine also records ordering information in real time.

Vending is a category with the potential to grow in the convenience-store foodservice segment, especially for snacking occasions. Recent Technomic research shows that consumers—particularly younger foodservice users between the ages of 18 and 34—seek out vending machines for snacks. Forty-one percent of younger consumers choose vending machines for midmorning snacks; 58% say the same for midday snacks. 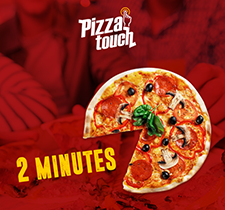 Pizza is increasingly appealing to consumers in this age range as a snack; Technomic’s 2016 Snacking Consumer Trend Report shows that 49% of consumers ages 18–34 purchase pizza as a snack, and 68% of consumers overall report choosing pizza as an afternoon snack.

Pizza Touch is a division of Grupo Rocket, an Italian holding company that has been operating foodservice and technology businesses for 15 years in global markets, including Australia, Brazil, Portugal, Mozambique, Japan, Italy and now the U.S. Pizza Touch vending machines are currently up and running in 400 stores in overseas locations.

Grupo Rocket announced the arrival of Pizza Touch to U.S. markets in April 2016; convenience-store installations, including the initial rollouts in the Florida Mobil units, are tests for the company. If successful, Grupo Rocket will prep for wider expansion of Pizza Touch in convenience stores and gas stations nationwide.