YORK, Pa. -- Rutter’s Farm Stores has announced that it will continue a partnership with f’real foods, which delivers milkshakes, smoothies and frozen coffee products with its patented in-store blending system. 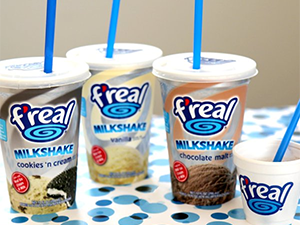 This partnership began as a test in 2008 and has since become a major offering in Rutter’s stores.

Rutter’s said it will replace its f’real first-generation B2 blenders with f’real’s new B4 touch-screen blenders. Beginning in spring 2016, the retailer will install more than 80 B4 blenders across its more than 60 convenience stores to help maximize frozen-beverage sales.

“The decision to reinvest with f’real foods was simple,” said Chuck Moyer, foodservice category manager for York, Pa.-based Rutter’s. “We recently ran a test with the new B4 technology and quickly realized that we would see a significant return on our investment as a result of the added features that the technology offered. It was obvious that these improvements will indefinitely contribute to increased cup sales while cutting labor and maintenance costs.”

The features of the B4 blender include a digital touch screen, a self-sanitization system and a patented Service Alert self-diagnostics platform.

“The self-sanitization is a significant upgrade that can dramatically increase blender uptime, as it doesn’t require extensive manual cleaning or the dismantling of equipment--just a daily surface wipe-down,” said Dinsh Guzdar, CEO of f’real foods.

Established in 1998, f’real foods designs, sells and markets its blended frozen beverages in more than 16,000 locations across the United States and Canada, including convenience stores, theaters, military bases and colleges and universities.

f’real foods is a wholly owned subsidiary of Rich Products Corp., based in Emeryville, Calif.